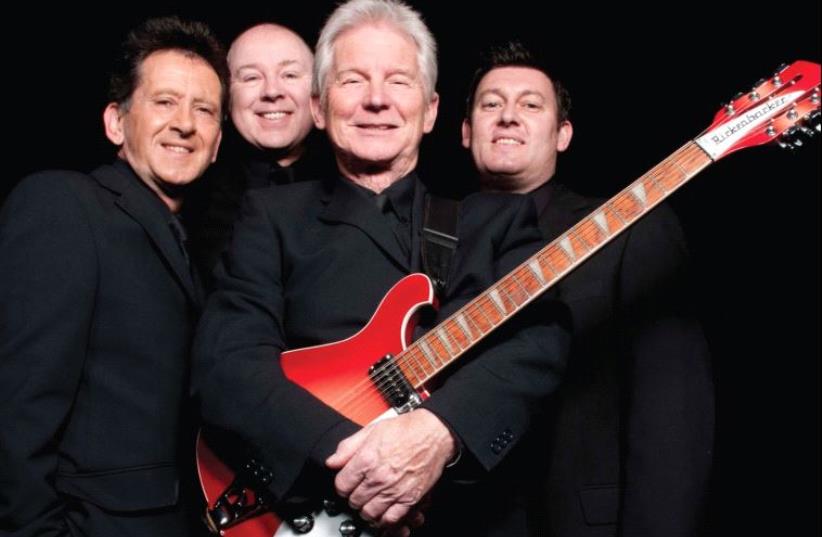 The Searchers
(photo credit: PR)
Advertisement
Liverpool didn’t produce its disproportionate share of successful rock groups by chance back in the 1960s. The blue-collar port city that spawned The Beatles, Gerry & the Pacemakers, The Searchers and dozens of other British Invasion pop acts who had a hand in revolutionizing modern music played an instrumental role, no pun intended.According to John McNally, a founding member of chiming guitar pioneers The Searchers, the workingclass homes of Liverpool were full of new, adventurous music from the US brought back by returning seamen as gifts for their kids.“We were fortunate to have a great seaport, and our family members were seamen in the merchant Navy,” said the 74-year-old McNally who, along with fellow founding Searcher Frank Allen, is bringing the classic band to Israel next week.“So they would bring all this great music back with them from America – early Motown, blues and country and western like Hank Williams. All the young lads picked up on that, and the skiffle craze developed in the mid- 1950s,” he added, referring to the distinctive British blend of upbeat shuffle music that John Lennon and Paul McCartney’s first band, The Quarrymen, tried their hand at.When the seminal rock ‘n’ roll records by Chuck Berry and Elvis Presley reached Liverpool’s shores in the same manner, the skiffle bands traded in their acoustic guitars and washboards for electric guitars and drum kits. The Searchers, formed in 1957 and named after the John Ford western of the same name, were no different. And soon, the newly pegged Merseybeat sound was born, with the renamed Lennon/ McCartney-led combo leading the way.“We were all friends, and there was this great camaraderie between all of the bands, including The Beatles,” said McNally. “The Searchers and The Beatles had this healthy competition – who was going to do the best, get the first record contract, have the first hit single. We used to go to lunchtime sessions at the Cavern club to see each other, and to the Andora club around the corner. It was a great time.”It didn’t take too long for The Beatles, with their oodles of charisma, tight ensemble playing and a burgeoning catalog of original pop masterpieces, to pull away from the pack. But they brought all their Liverpool mates along with them, and British and later US record companies began signing every Liverpool band with shaggy hair and guitars, The Searchers among them.The quartet tried to become the second Liverpool group after the Fab Four to score a hit in the US when their jangly remake of Jackie music out & about highlights dining events movies television DeShannon’s “Needles and Pins” charted in March 1964, the same day as the The Swinging Blue Jeans’s “Hippy Hippy Shake.” And the hits kept coming. These included a cover of the Drifters’ 1961 hit “Sweets for My Sweet”; DeShannon’s “When You Walk in the Room”; “Sugar and Spice”; and a cover of the Clovers’ “Love Potion No. 9.”The British Invasion phenomenon spawned an endless cycle of touring, recording and screaming adulation, a development that young, insular, barely-out-of-their-teens Searchers were unprepared for.“We had no idea what was going on. We were just told what to do all the time, from going to the studio and churning out records to being on the road constantly,” said McNally. “They used to work us very hard because, like all things, there was a generational factor at work.The life cycle of pop bands in those days was very short, and nobody knew how long it was going to last.”McNally admits that the relatively short shelf life of The Searchers’ original run of hits was due to their lack of original material, something The Beatles had in spades.“The Beatles were on another level because of their songwriting ability and their classic songs. We used to get all the new releases from Pye and Tami Records, play their B-sides and see what we could adapt,” said McNally.Unlike The Beatles and The Rolling Stones, The Searchers were unable to evolve from their guitar pop roots, and they fell by the wayside. However, the punk and new wave revolution of the late 1970s embraced their simplicity, and the band enjoyed a short resurrection before reverting to a legacy act that has continued to perform ever since.Latter-day rockers like Tom Petty & The Heartbreakers and Bruce Springsteen have regularly covered “Needles and Pins” and “When You Walk into the Room.” And The Searchers – along with The Byrds – are credited with introducing the 12-string guitar to rock ‘n’ roll.“It’s nice to be recognized, but we don’t want to go on an ego trip; it’s just a band,” said McNally. “You can’t take all these compliments too seriously. We’re out there having a laugh, and we still enjoy it. Once we can’t stand on our feet anymore, then it’s time to pack it up.”

The Searchers will perform on August 19 at the Haifa Auditorium; August 20 at the Charles Bronfman Auditorium in Tel Aviv.
Advertisement
Subscribe for our daily newsletter