The sonderkommando had to scrub out the chambers after each use and remove the corpses, which the Nazis referred to as “pieces,” to the ovens for cremation. 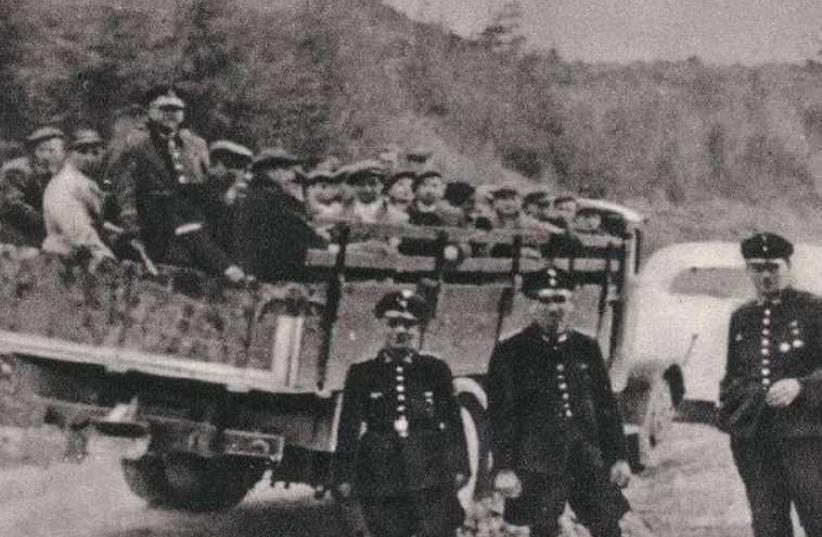 Jewish sonderkommando unit
(photo credit: Courtesy)
Advertisement
Hungarian director Laszlo Nemes has created a stir at the Cannes film festival with his wrenching Son of Saul, portraying the work of the Jewish "sonderkommando" laborers who were forced to do some of the Nazis' dirty work in death camps.In a movie at times almost too intense to watch, Nemes and his cast show the "sonderkommando" teams who were used by the Nazis to convince newly arrived inmates at Auschwitz to strip off their clothes and enter the gas chambers - on the pretense that they should move quickly or their soup would get cold.The sonderkommando had to scrub out the chambers after each use and remove the corpses, which the Nazis referred to as “pieces,” to the ovens for cremation.The film unflinchingly shows laborers stoking the ovens with coal and shoveling ash into a river - part of the Nazis' effort to conceal their crimes.Nemes, 38, whose first feature film has been given the unusual distinction of being entered in competition for the festival's main Palme d'Or prize, said he was inspired to make Son of Saul by the discovery after the war that the Jewish laborers had hidden written descriptions of what they had been forced to do in secret locations around Auschwitz."They were better fed but they knew that they would be exterminated after a while," Nemes told a news conference on Friday. "So it was very difficult work they had to undertake, but what was important for me was...I wanted to make a film about this hellish experience in a different way."His film is set in 1944 when some of the sonderkommando mounted a failed rebellion against Nazi guards. One of the laborers, Saul Auslander, played by Geza Rohrig, who is a writer and not a professional actor, comes to believe a dead boy among a recent group of gassed Jews is his son. He searches throughout the camp for a rabbi to help him bury the boy properly by saying the Kaddish prayer for the dead.Matyas Erdely, director of photography, said his challenge had been how to show "things that cannot be shown". He said he and Nemes had adopted an approach of seeing things through Saul's eyes, and leaving much to the viewer's imagination.The result, though, is graphic enough and making the film had a profound effect on the actors and crew. Levente Molnar, who plays Saul's co-worker Abraham, said he had been overwhelmed during a run-through of a scene when the forced laborers are preparing new arrivals for the gas chambers."I took a huge hit at that moment and I'm just too small even to imagine those feelings, what these guys were forced to experience, and I got scared because I felt that it's overwhelming," he said.