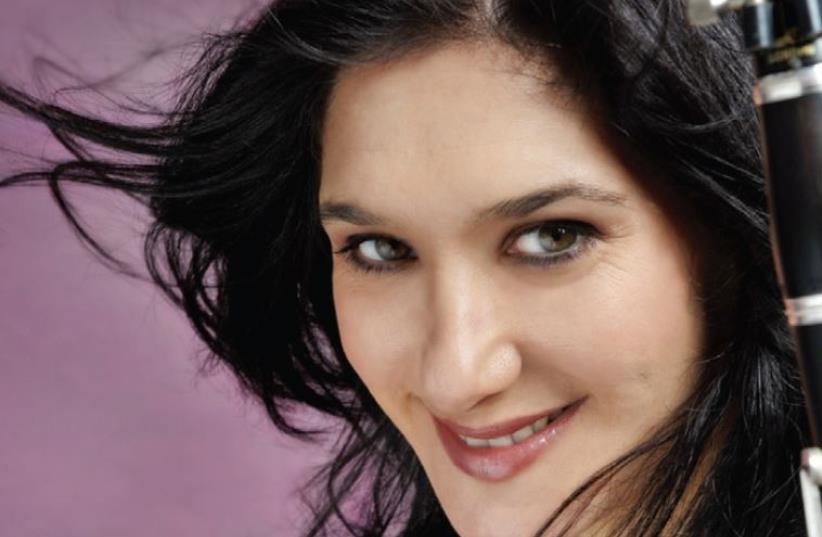 Sharon Kam
(photo credit: PR)
Advertisement
Next week, world-renowned Israeli-born clarinetist Sharon Kam will perform here as part of a chamber ensemble, playing works by Mozart, Schumann, Bartok and others.Kam was born into a musical family.Her mother, Rachel, is a violist who recently retired after playing for many years with the Israel Philharmonic Orchestra. Her brother, Ori, is also a viola player, who was a member of the Berlin Philharmonic Orchestra and is now a member of the Jerusalem Quartet.Kam is well known here from her numerous concerts as a soloist with the IPO, but her career is centred mainly abroad.She studied in Israel and then at the Juilliard School of Music in New York.Her career flourished after she won an international contest in Munich in 1992. Since then, she has appeared with many of the best orchestras in the world. At the same time, she performs regularly with chamber ensembles with the some of best musicians around the world.“I left Israel 27 years ago to study,” says Kam in a telephone interview from her home in Germany. “But I still go there a lot, to play and to visit the family. My children speak Hebrew, and it is very important for me that they will have a good connection with Israel.”Kam will be performing with her brother Ori and Israeli pianist Matan Porat, who also lives in Germany.“We have played a lot together in this ensemble in recent years,” she says. “At some point, we decided that we should also perform in Israel. All three of us are Israeli, and we wanted the Israeli audience to enjoy our trio as well.”The concert’s program will include works by Mozart (Trip K’ 498 Kegelstadt), Schumann (Fairytales for clarinet, viola and piano), Brahms (two songs arranged for clarinet trio), Schubert (three Musicaux Moments for piano) and Bartok (Contrasts).“A few of the works are different than the original score,” says Kam.“The Brahms lieder were originally composed for mezzo-soprano, viola and piano. In the concert, the clarinet takes the part of the singer. The Contrasts by Bartok were originally composed for a piano trio with violin and clarinet, but the part of the violin will be played by the viola. It is a very difficult piece to perform in the original score, and with a viola it is even harder,” she laughs.It is very popular nowadays to play with period instruments that resemble the instruments used when the music was written. Do you play on period instruments as well? Sometimes I play on different instruments, such as bass clarinet that was used in Mozart’s time. But you have to remember that in the 18th century, every musician had his own instrument, and there was no factory that made all the clarinets. It is said that Stadler, for whom Mozart wrote his clarinet pieces, forgot his clarinet in a carriage, and to this day we don’t know what the instrument’s specifics were. In any case, in Israel I will be playing on a regular clarinet.How much does a clarinet like the one you play cost? I play on a simple instrument that costs about 1,800 euros. Surely there are clarinets that cost much more, but I don’t like to play on them. When you play with an expensive instrument, the maker of the clarinet is in fact responsible for part of the sound. I like to play my simple instrument the best because I like to be the one creating the sound.

Would you recommend to a young musician today to choose a career as a soloist? It is very hard to answer that. Even to my oldest daughter, who wants to be an opera singer, I am not sure if I would recommend it. I had a very soft landing as a career musician because from the age of 15 I already played as a soloist with Zubin Mehta, and by 18 I already had a lot of experience.I studied at Juilliard on full scholarship, and at 22 I won an international contest. So I had a lot of credentials, but still I was not sure that it was the right thing to do. On one hand, following one’s dreams is important, and there is still room for real artists. But success is not a sure thing. There are so many factors that influence your career, even if you are an excellent musician. No one is looking for another clarinet star.And really, many soloists prefer a steady job as a member of an orchestra. It may be less glamorous, but this way they can be sure of their income.How would you compare the classical music situation here and in Germany? There are wonderful musicians in Israel, but if you don’t play at the IPO, it is very hard to survive. If you want to earn a living as a musician, you have to leave Israel. It is much easier for me in Germany.There is a steady audience and a lot more money for classical music and for art in general. There is a long tradition of classical music in Germany, and the authorities support the opera, orchestras and theaters. It is very different from what we have in Israel, where it seems that the government has no interest in classical music. It would be very sad if this part of the culture disappeared.The concerts will take place at the Tel Aviv Museum of Art on May 24 and at Kibbutz Naan on May 26.
Advertisement
Subscribe for our daily newsletter