The world-class saxophonist and former member of Dire Straits is proud to be performing with his fellow sultans of swing in Tel Aviv this week. 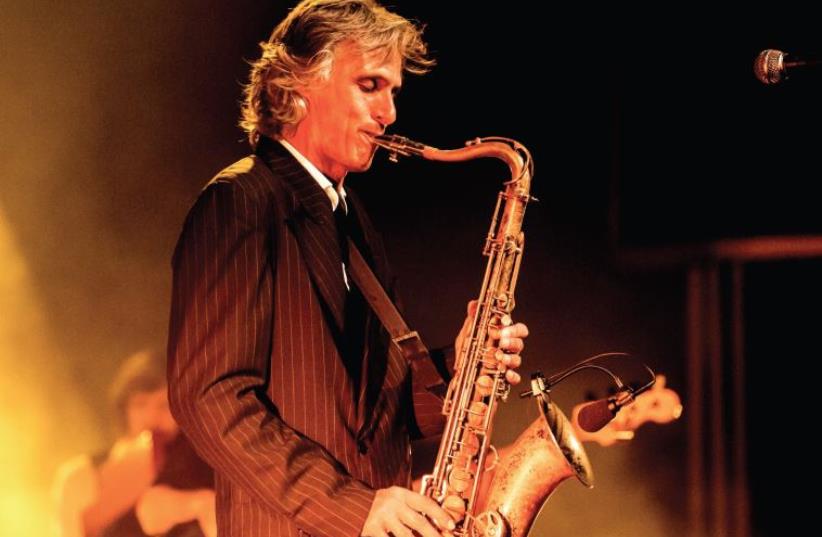 ‘I WILL always play! You’ll have to pry the saxophone out of my hands! ...Music is a passion and it’s a obsession,’ says former Dire Straits member Chris White
(photo credit: TOM CLEARY)
Advertisement
"You just climb inside that thing as it starts and you get in there and just live through it... it’s brilliant every time,” says saxophonist and former member of the original Dire Straits Chris White.He’s describing the moment of being fully immersed in “Brothers in Arms,” the wrenching title song from the band’s landmark 1985 album that propelled them to superstardom.White is now leading The Dire Straits Experience, celebrating the heights of the Mark Knopfler-led band with fans who can sing along with the words of every song from “Sultans of Swing” to “Walk of Life.”“It’s such a humbling experience for the fans to go crazy for these songs still, and it’s a testament to Mark’s writing and arrangement,” says White.White, who joined Dire Straits in the early 1980s and accompanied them to their stadium-band status before the band’s breakup a few years later, talked to The Jerusalem Post about his recollections, the set list for the Dire Straits Experience’s upcoming shows in Tel Aviv and how music is simultaneously a passion and an obsession.Have you played in Tel Aviv before? Yeah I was there two years ago for a gig, which was great, and with Dire Straits back in 1985.Was that the ‘Brothers in Arms’ tour? Right! It was the first time I was playing with Dire Straits, but I had worked with Mark for a few years before that.Is that how you met the crew? I met Mark when I was doing a session for a UK TV star in 1982. I got a call from Paul Cummings who worked with them asking if I could come to AIR studios as they needed saxophone on a track for a film called Comfort and Joy. They booked me for three hours and assured me “it’ll take 20 minutes,” then in walked Mark Knopfler and said “You sound like Michael Brackett,” an American sax player. We started playing and it went so well that the three-hour session turned into three days.Had you been a fan of Dire Straits before you joined them? I actually was, I had heard the original version of “Romeo & Juliet” and thought it was fantastic.I believe there isn’t any saxophone on the original, but you incorporate this richly textured sax solo live? I always wanted to play on it and all the live versions from 1985 have a sax solo because I manage to force one in there! So how did you end up joining Dire Straits back in the day? After a couple of years working with Mark, I was asked to record on the Brothers in Arms album, but I couldn’t because I had already committed to record with someone else. An unwise career move! Sure. Knopfler had written some seriously hooky songs in the past, and when you left and they wrote ‘Brothers in Arms’ that got a lot of radio play.

I turned it down for a band which I think I bought the only album ever sold [Laughs].The way I worked was loyalty came first for me and I couldn’t let them down but in the end Mark called back and told me to join the tour. We then recorded the album On Every Street in 1991. After that Mark wanted to make a change and pursue his solo career.He felt that a change of scene was what he needed. I think that’s right and proper, to go your own way. People need to move on and follow whatever it is they want to do.At least you carried on playing after Dire Straits disbanded. You toured with Paul McCartney, Mick Jagger...but what inspires you to keep performing? I will always play! You’ll have to pry the saxophone out of my hands! I’ve been very lucky to work with a lot of great talent.Music is a passion and it’s a obsession. I still practice every day and I’m still not the best sax player I can be, it’s great that there’s still so much to discover.What was your process of choosing a vocalist who could do these songs justice? Strangest thing really, we’re now called The Dire Straits Experience, before it was The Straits, and that started four years ago when someone approached us to do a charity show at The Royal Albert Hall to play Dire Straits music. We knew that Mark always said he wasn’t interested in going back, so I originally thought we wouldn’t find somebody to fill those shoes. Alan Clark [original Dire Straits keyboardist] found Terence Reis on the Internet, who was living in Johannesburg at the time performing as an actor.Within five minutes he naturally had a voice like Mark, but sang a little higher and bit more rock-y. That show went so well that fans kept turning up and we kept playing.Is there a science behind putting together the set list? Is it the expected hits, ‘superfan’ picks or obscure personal favorites? For me personally, I love playing “Romeo and Juliet” and “Your Latest Trick,” but I think songs like “Brothers in Arms” – that’s a really emotional song. It’s great every night, you just climb inside that thing as it starts and you get in there and just live through it and it’s brilliant every time. I’m so privileged to be a musician and this feels like the real deal.I understand you’re going to be performing two shows in Tel Aviv? I’m proud and so pleased to be given the opportunity to bring this band to Tel Aviv. I wouldn’t want to do this if it wasn’t done as well as it was done all those years ago.Do you keep up with current events regarding the Israeli-Palestinian issue? Lauryn Hill was quoted recently because she canceled, I believe. I do keep up as much as I can. Coming as a musician playing this music is to give everyone who comes a really great night. This probably sounds naff but it’s to spread a bit of love around, we all need a bit of cheer at the moment and that’s what we’re coming to do.

The Dire Straits Experience will perform June 26 (10 p.m.) and June 27 (9 p.m.) at the Amex Music Arena at the Tel Aviv Exhibition Grounds.