Coming up on the small screen 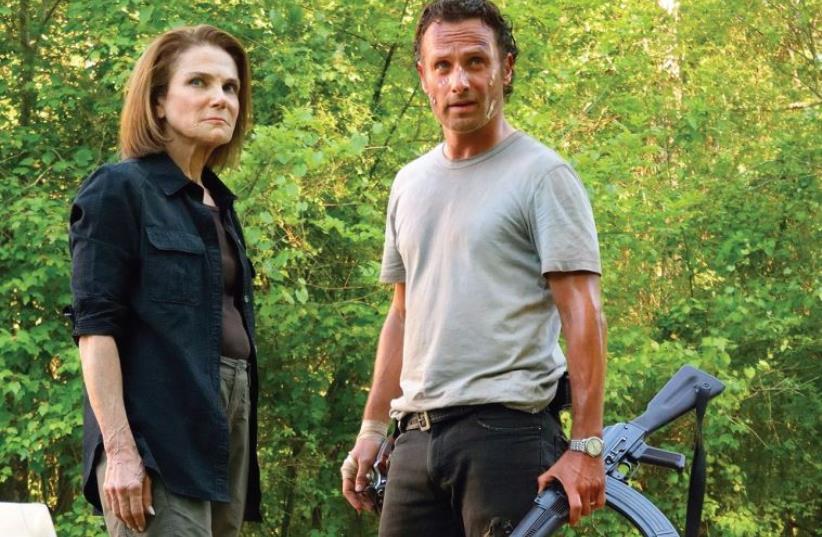 'The walking dead' TV series
(photo credit: PR)
Advertisement
There is an enormous number of broadcast tributes to prime minister Yitzhak Rabin coming up, since it is almost the anniversary of his assassination 20 years ago. On October 24 at 10:30 p.m., Channel 1 is broadcasting the documentary Rabin’s Last Cigarette . It will also be aired on October 27. The movie, directed by Ido Zuckerman and Ido Bahat, examines Rabin’s life through the memories of people who smoked with him, as politically incorrect as this may seem to many today. They make a case throughout the film that his smoking was inextri cably linked with his self-image as a Zionist hero and pioneer. When he died, a pack of cigarettes was found in his pocket. The film also features clips of Rabin – smoking and not smoking – but concentrates on the reminiscences of friends who were mostly colleagues of his at some stage in his military career. One of the most affecting moments comes from a news clip of the press conference after the killing of kidnapped Israeli soldier Nachshon Wachsman by Hamas, in which Rabin takes full responsibility for the failed rescue attempt rather than leaving it to his chief of staff, Ehud Barak. YES Docu will be airing the documentary Rabin in His Own Words by Erez Laufer on YES VOD. It won the top award at the recently concluded Haifa International Film Festival.Just when it’s quiet on The Walking Dead , that’s when you really have to worry – as fans of the show know all too well. The last couple of seasons of the show have dragged a bit, especially once the main group of survivors arrived in the sheltered, self-sustaining community of Alexandria, where the worst Rick (Andrew Lincoln) had to deal with was an abusive surgeon. But the sixth season has started out with a bang, so to speak. It airs on YES Oh on Mondays at 6 a.m. (to coincide with the American broadcast to discourage piracy, since this is the top-rated TV show in the US and draws high ratings all over the world as well) and at 10:50 p.m. on Mondays on YES Oh and YES VOD. While once, a couple of dozen zombies were enough to raise fear, now the characters have to contend with a horde of thousands and also with a murderous group of human thugs who come to try to take over the community. The question, obviously, is how long the show can keep drawing viewers by creating variations on the same scenario: fighting deadly zombies and often deadlier humans. But there are hundreds of issues of the comic on which the series is based, so the answer is at least a few more seasons. One interesting aspect of the series is that non-Caucasian characters have always had central roles, unlike on so many shows. The Wire , the HBO series voted the best of all time in a number of polls, which ended in 2008, featured a similarly racially mixed cast, and it’s no surprise that many of the actors from The Wire are on The Walking Dead : Chad L. Coleman (Cutty on The Wire , Tyrese on The Walking Dead ); Lawrence Gilliard Jr. (D’Angelo Barksdale on T he Wire , Bob on The Walking Dead ); Seth Gilliam (Carver on The Wire , Father Gabriel on The Walking Dead ). If you’re looking for something lighter, the final season of the sitcom/mockumentary Parks and Recreation is coming to HOT’s Comedy Central Channel starting on November 1 at 10:30 p.m. and will air Sundays through Thursdays. The show, which some think outshines even such comedy gems as 30 Rock , stars Amy Poehler as the deputy director of the parks and recreation department in a fictional Indiana town. Her co-stars include Adam Scott, Aziz Ansari, Rashida Jones, Rob Lowe, Chris Pratt, Nick Offerman, Aubrey Plaza and Retta.