Classical: Back to where it all began

The Ariel String Quartet will perform in Jerusalem. 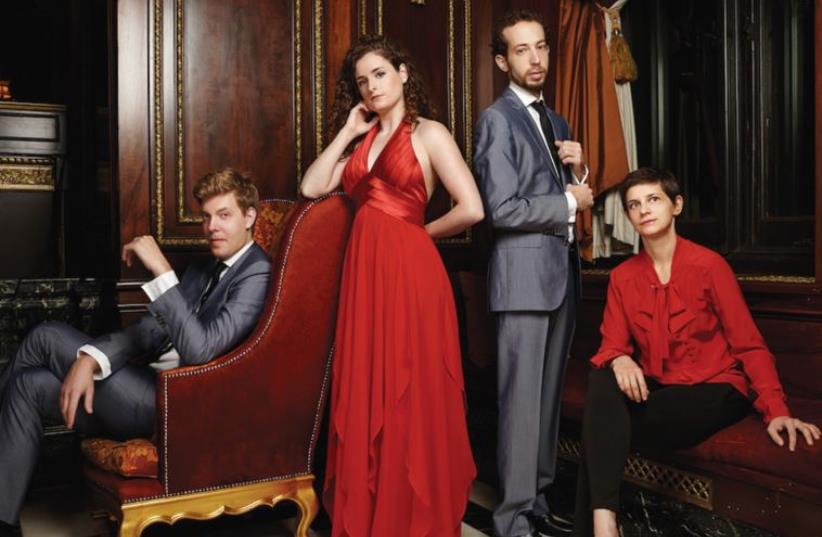 Ariel Quartet
(photo credit: PR)
Advertisement
‘It all started as a lesson,” says Sasha Kazovsky, 31, of the Ariel String Quartet in a phone interview prior to the ensemble’s performance on January 7 at the YMCA in Jerusalem.The Jerusalem Music Center dedicates two evenings in January to the concerts of its successful alumni – the Jerusalem Quartet (January 6) and the Ariel Quartet, which will appear with Arthur Rubinstein first prize winner pianist Roman Rabinovich.“In 1998, our future tutor at the Rubin Music Academy, secondary school violinist Avi Abramovich, brought us together. We were 14 years old, and he thought we suited one another. It all started from a lesson. At the time, not only did we not plan to form a quartet, but we didn’t even know what a string quartet was!” she laughs.But soon the youngsters were hooked.“Avi Abramovich gave us challenging pieces, such as Beethoven’s Quartet, and we rehearsed it day and night. We discussed this and other pieces.We actually grew up together year by year,” she says.Then the Jerusalem Music Center took the young foursome under its wing.“We had already performed in minor concerts, but the JMC gave us the opportunity to perform in their live broadcasted series, The Young in the Center. We tried to prepare interesting programs. That is when we started to take quartet playing seriously,” Kazovsky recalls.In 2002, the quartet won an international competition in Austria.“At that time we were deliberating. We thought maybe it was the right time to continue studying abroad – in Europe or in the US – to meet new teachers with different approaches,” she says. “American cellist Paul Katz, who was a member of the jury, invited us to participate in the six-week summer Chamber Music Workshop of the Perelman Music Program, which takes place annually in the US. For us, this was a turning point. We met our future teachers – musicians such as Itzhak Perlman, Paul Katz, Donald Wallerstein and Merry Peckham.And we realized that wherever these people were, we had to study with them. Not only the teachers were great, but the atmosphere itself was amazing, mind opening, inspiring. There, you were carried away with an urge to play as much as possible.”That was how in 2004 the quartet members moved to the US and enrolled in the New England School of Music.“The level there is as high as at Juilliard. But again, the atmosphere is special, and playing chamber music, performing together is much appreciated and nurtured,” she says.“Paul Katz, Perelman and his wife, Israeli Miriam Fried, helped us a lot in acclimatizing to the new place. Israel gave us a lot. For young musicians, it is like a hot house, but we, being 18 and 19, felt it was time to learn something new and different,” she explains.Kazovsky describes the story of the quartet as a chain of happy circumstances and coincidences.“In the summer, we participated in a chamber music workshop, ProQuartet, in France. There we met another prominent tutor, violinist Walter Levin, a founding member of the LaSalle Quartet.This legendary musician, who taught many leading quartets, was born in Berlin, immigrated to Palestine and graduated from Juilliard. He has the reputation of being a very strict teacher because with his immense erudition, he knows exactly how music is to be played. At that time, this approach was extremely important for us. We were warned not to be afraid of him, but we had – and still have – a wonderful connection with him,” she says.The Ariel Quartet spent a year in Switzerland, studying with Levin, performing throughout Europe and absorbing particularities of the new – this time European – world of music. Ultimately they landed at the University of Cincinnati, where they teach and enjoy the position of quartet in residence.“We are in charge of the entire chamber music activities there,” says Kazovsky. “We organize concerts, music competitions and more. We also have our own chamber series in the concert hall, bring musicians from all over the world to perform. In addition, we perform in the US and Canada, as well as in Europe and in Israel. We teach and tour. I believe that it’s important for our students to see that as a quartet we get together every day for rehearsals. We regard it as an important element of their musical development.”In Jerusalem, Ariel will perform three pieces.“We open with Haydn’s ‘Sunrise’ quartet, op.76, very virtuoso and beautiful,” she says.“Although this was Haydn’s last finished quartet, when he was not that young, the piece is full of energy, of light, of humor. We especially love this piece because it was one of the first quartets we ever heard live, and we were immensely impressed.”The Lyric Suite by Alban Berg follows.“This is a very unusual piece of music,” says Kazovsky. “It is well thought through, yet full of emotion and beauty. It consists of six movements, very different one from another, and there is a back story. The piece was composed for Hanna Fuchs-Robettin, a married woman with whom Berg had an affair. As such, it is full of symbolism.For many years nobody knew about the piece until a manuscript, written by Berg for her, was found. But even if you don’t know that the movements are in a way chapters of their romance, this masterpiece is still a very powerful and personal composition.”The concert will close with Brahms’s piano quartet “with pianist Roman Rabinovich, who is our childhood friend,” adds Kazovsky.The Ariel Quartet will perform on January 7 at the YMCA in Jerusalem. For reservations: (02) 624-1041