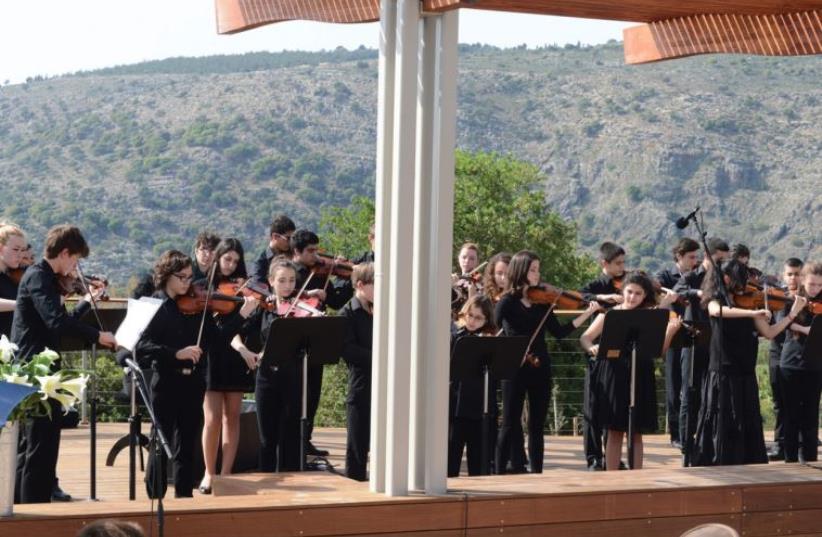 Some 60 young string players from all over the world come to the Keshet Eilon summer course
(photo credit: SARIT UZIELI)
Advertisement
This year Keshet Eilon, the international summer master course for violinists and string players, celebrates it 25th anniversary. What started as a modest project of hosting a dozen young violinists – mostly new immigrants from the former USSR and their teachers – for two weeks in the serene Western Galilee Kibbutz Eilon has become one of the world’s most popular and prestigious summer camps for musicians.The course, which takes place this year from July 26 to August 13, hosts some 60 young aspiring string players from all over the world. The program features individual lessons, master classes, concerts by students and tutors, a gala concert in Tel Aviv in the presence of President Reuven Rivlin (August 5), as well as other events. Admission to part of the activities is free or a nominal fee. Concerts by the chamber ensemble Moscovia from Moscow, led by renowned professor Eduard Grach, and the Polifonia orchestra from the Galilee are among the course’s special events. And so is the Homage to Alumni – this year’s graduates of Keshet Eilon who have already created individual careers and will return to perform or to teach. For example, Keren Tannenbaum, who started as a classical violinist and later switched to the world of pop and rock music as a violist and singer, will appear in a concert with the Gilad Efrat Trio. Among those who will perform in the alumni concert is violinist Sergey Ostrovsky, who returns to Keshet Eilon as a teacher.Born in the Soviet Union, the talented youth first attended Eilon in 1993 at age 17. “It was not the summer course but a spring seminar, but I was already very impressed and dreamed of coming back in the summer,” recalls Ostrovsky in a phone interview from his home in Geneva. He indeed returned and was exposed to this special Israeli music experience in many ways.”My first participation in Keshet Eilon already gave me the sense of belonging to the major world of music – that of Israel and that of the West, since many students came were from abroad,” he says.“Already at that time, Keshet Eilon for me was not only about teachers. Gilad Sheba, the co-founder and CEO of the course, was everybody’s father. From my Soviet experience, I expected to see a nervous and commanding person in that position. But Gilad was warm, caring, attentive.” But Keshet Eilon is first and foremost about teaching and passing on age-old violinist tradition. Ostrovsky recalls his encounters with such teachers as Matvey Lieberman, whom he had already heard about in Russia and was teaching at the Tel Aviv Music Academy. “His lessons have not lost their importance until today,” says Ostrovsky. Keshet Eilon is a place where young musicians have the chance to meet great artists of older generations. In that regard, encounters with such musicians as the legendary Ida Haendel cannot be underestimated. “Ida Haendel belongs to the epoch when music making was far less commercial and far more individual. I played for her at a master class, and I know how attentive she is to individual intonation, to minor nuances of a rendition,” he says.Viola and cello, as well as chamber music, have recently been added to music disciplines taught at Keshet Eilon. “I think that is good,” he says. “It is important for violinists to be exposed to other string instruments and especially to chamber music making. It makes them more attentive, more open and turns them from ‘just a soloist’ into a musician.”Ostrovsky, who served as concertmaster of the Orchestre de la Suisse Romande until 2012, divides his time among conducting, giving solo performances, performing with the Aviv Quartet, of which he is a founding member, and teaching at the prestigious Haute Ecole de Musique in Geneve.