A guest at this week’s French Film Festival in Israel, the legendary director talks about his love of life, cinema and Tel Aviv. 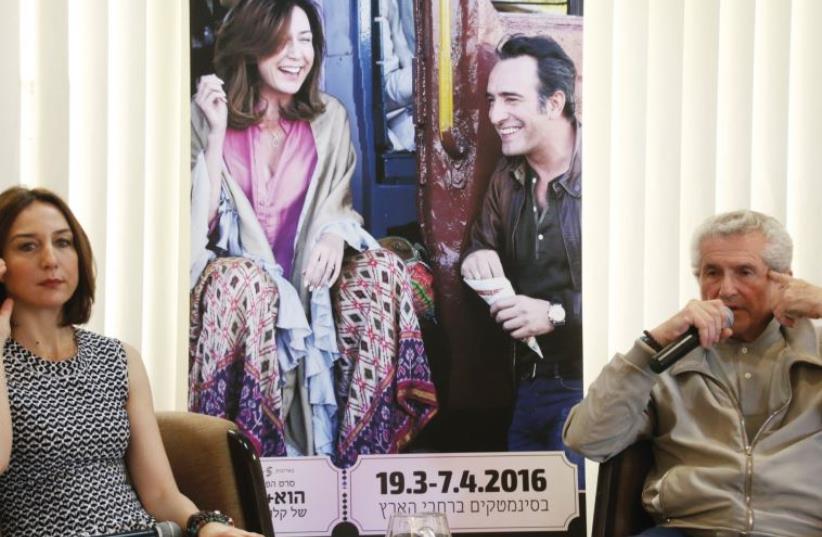 DIRECTOR CLAUDE LELOUCH (right) with actress Elsa Zylberstein at a press conference yesterday at the Institut Francais in Tel Aviv
(photo credit: ADI ALON)
Advertisement
‘Looking at life, I feel there is a great director who is making a film, and he is a better director than I am,” said Claude Lelouch at a press conference at the Institut Francais in Tel Aviv on March 20, along with actress Elsa Zylberstein, who stars in his latest film, Un + Une.Un + Une will open in Israel this week and is the opening film of the 13th French Film Festival in Israel, which runs at cinematheques in Jerusalem, Tel Aviv, Haifa, Holon, Herzliya and Sderot, and in the Culture Halls of Savyon and Ashdod, through April 7.Lelouch and Zylberstein will be at the Jerusalem Cinematheque for the screening of Un + Une on March 21 and at other screenings.The director, who is best known for his Oscar-winning 1966 romance A Man and a Woman, has made 45 films throughout his career, working in nearly every genre.Among his many films are Roman de Gare, And Now My Love, and Cat and Mouse.Un + Une returns to his favorite theme of an improbable love that develops between very different people and transforms them.Zylberstein stars as the wife of the French ambassador to India, who goes on a pilgrimage to a healer to try to end her infertility, and falls in love with a cynical French musician, played by Jean Dujardin, who won a Best Actor Oscar for The Artist. But Un + Une adds a spiritual component to this story, one that Lelouch was happy to discuss on this visit to a place that has great meaning for him.“I am so happy to be in Tel Aviv, very happy to be in Israel. It is far from France but I always feel close to this country. I have been here 10 times and when I am here, I feel at home... It is a country that I love very much. I always appreciate the fact that in Israel you live with difficulty and insecurity, the past and future compete with the present... but the tension and instability make the human contact here stronger.”Speaking about his religiously mixed background, Lelouch said, “I am lucky. My father was a Jew from Algeria. My mother was a Christian from Normandy. My mother converted out of love for my father. I was in synagogue and in church growing up. My mother brought me to priests. My father brought me to rabbis. I grew up with contradiction and tolerance.”A few years ago, he said, he was approached by a group of rabbis who wanted him to make a movie about the Bible.“They came to me with a script that was so long. Next to this script, the Bible is a short film. I said, ‘Who will produce this?’ They said, ‘The biggest producer in the world will do it. God will do it. He is behind all the masterpieces in the world.’” Although in the end, the biggest producer found another director for this project, Lelouch was impressed by the spirit of these rabbis.Zylberstein echoed his respect for spirituality as she described how she came to work with Lelouch.“I don’t believe in coincidences. I was on the same plane with Jean Dujardin,” she said. The two spent the entire flight to Los Angeles discussing their idea for the film.“We talked about film and dreamed about film, and we talked about Claude Lelouch and we said, ‘Why don’t we do a love story with Claude Lelouch?’” Once they arrived in the US, they called Lelouch and told him, “We want to do a movie with you. And later we met, the three of us.”Discussing her character, whose spirituality both propels her on her pilgrimage and also pushes her to fall in love with Dujardin’s character, she said, “I think that purity always conquers cynicism.”Zylberstein, who visited Israel 20 years ago to promote the film Mira Tannenbaum, and who also has family here, said she has been in contact with director Amos Gitai and with actress/director Ronit Elkabetz about possibly working on a film here.Reflecting on his long and successful career, Lelouch said that he loved both his work and his life.“Truly I have been lucky. There is no meaning in the world but love. Without love, everything else is a consolation prize... If you don’t love someone or something, you might as well ask yourself what you are doing here... I have done one love story after another and every time I fall in love with the characters. With Anna [the heroine of Un + Une] I met the love of my life. Women have taught me about love...My problem is I love everything more and more... We live in paradise, but people can make paradise into hell when they don’t love life... Through my films, I try to help people love life more.“Some of my films were a great success, others no. That’s wonderful because when a film fails, you learn. I took a risk on all my films after A Man and a Woman. I could have worked only with big stars, and adapted bestsellers. But I love cinema. I always want to see what can be done with a camera and a story.”Asked about how the world has changed in the 50 years since he made A Man and a Woman, Lelouch said, “Women took over, women took charge... We cheated on them, lied to them, and now they can be without us... Women realized you can’t depend on us. We are not trustworthy. This is why men fear women.”In spite of all the conflict and violence in the world, Lelouch said he remains optimistic: “Life is like the weather. After a storm, the sun shines. It will happen soon.