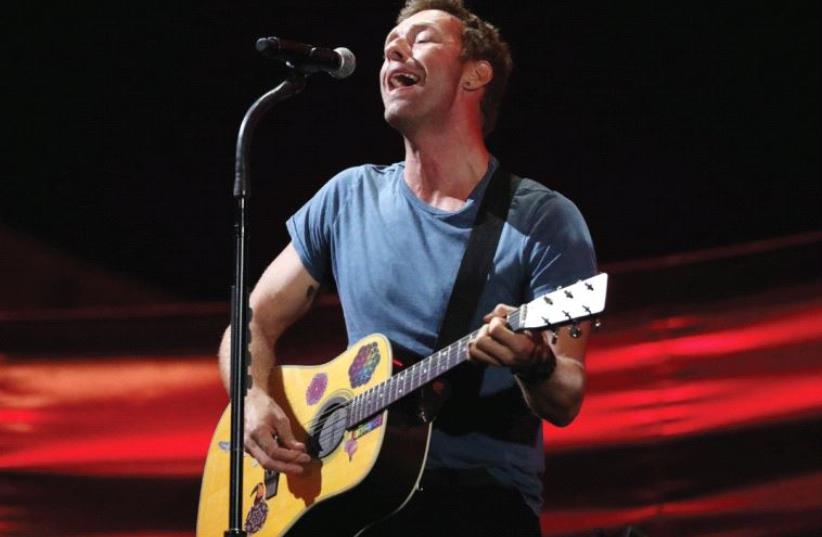 CHRIS MARTIN performs at the Global Citizen Festival at Central Park in Manhattan, New York.
(photo credit: ANDREW KELLY / REUTERS)
Advertisement
Among the thousands who packed Tel Aviv’s Menorah Mivtachim Arena for Nick Cave and the Bad Seeds’ show Sunday night was Coldplay vocalist Chris Martin.Martin was spotted backstage at the well-received show, but had already been seen in Israel over the weekend in Herzliya, together with 50 Shades of Grey star Dakota Johnson, with whom he has been romantically linked. According to Ynet, Martin and Johnson dined in Tel Aviv with Cave, who was making his first visit to Israel in some 20 years.Martin has been a frequent visitor to Israel according to entertainment industry insiders, and late last year reports proliferated about a planned concert by Coldplay at the Dead Sea or another venue in the country. So far, there has been no official announcement about such a show, but could Martin’s presence at the Cave show be a precursor of things to come? If so, Coldplay will join the Australian singer/songwriter and other performers who have raised the ire of BDS supporters and bucked Israel boycott calls.At a pre-show press conference on Sunday, Cave said his two performances in Israel on Sunday and Monday marked a "a principled stand against anyone who tries to censor and silence musicians." In response, two of the most vocal public figures supporting BDS, Roger Waters and Brian Eno criticized Cave.
Roger Waters performs at Desert Trip music festival at Empire Polo Club in Indio, California U.S., October 9, 2016
"Nick thinks this is about censorship of his music? What?" Waters wrote. "Nick, with all due respect, your music is irrelevant to this issue. So is mine, so is Brian Eno's, so is Beethoven's. This isn't about music – it's about human rights… "We hurl our glasses into the fire of your arrogant unconcern, and smash our bracelets on the rock of your implacable indifference." Eno targeted Israel, saying Cave’s claim of silencing artists was "rather grating when used in a context where a few million people are permanently and grotesquely silenced." "Israel spends hundreds of millions of dollars on hasbara, and its side of the argument gets broadcast loud and clear. Coupled with the scare-tactic of labeling any form of criticism of Israeli policy as 'antisemitic,' this makes for a very uneven picture of what is going on."On Monday night, another sold-out arena received their own picture of what is going on – Nick Cave performing his heart out. In her review for The Jerusalem Post, Sarah Levi wrote: “What could almost be described as a cathartic performance, Cave and his band went from whispers to sporadic shouts and almost hysterical musical accompaniment and back again, creating some sort of a collective musical exorcism which opened up the audience to bask in the euphoria of the performance.”