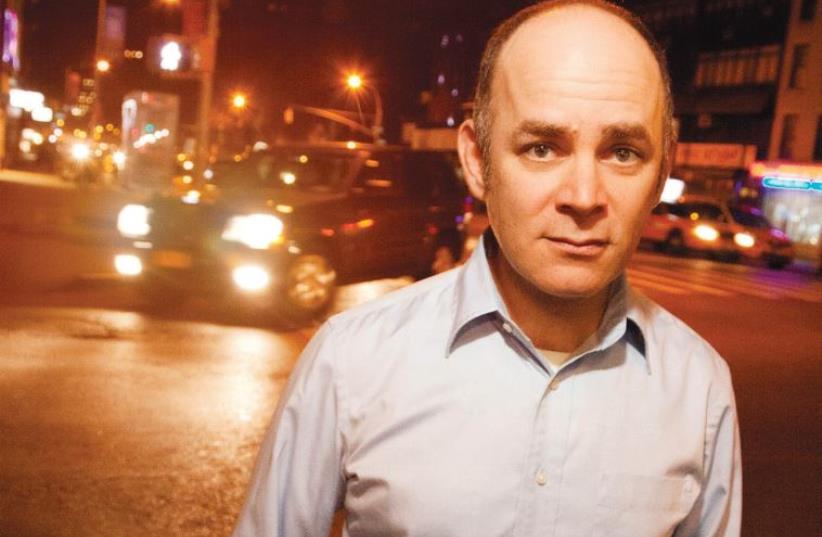 Todd Barry
(photo credit: MINDY TUCKER)
Advertisement
One of Todd Barry’s wry comedy routines is about a visit to Walgreens, the American steroid-injected pharmacy department store. But when he makes his Israel debut on June 3 at Zappa Tel Aviv and June 4 at Zappa Herzliya as part of the chain’s Funny People series, he’s not planning on localizing it into a SuperPharm bit.“When I perform abroad, if the audience is nice they’ll let me set it up – ‘hey, there’s this place we have in the United States – a big drug store....If they’re there to have a good time they’ll listen and give you the benefit of the doubt,” said the droll 51-yearold comedian and actor last week.A fixture on Comedy Central and in recurring TV roles on Louie and Dr. Katz, Professional Therapist, as well as a slew of animated comedy series, Barry and his insightful observational humor has caught on big, not only with audiences, but with fellow comics.“Todd Barry is a huge comic. He’s always been one of my favorites, there’s never been anyone like him,” said Louis C.K.A New York Times story called Barry a “master standup” and wrote, “When it comes to live performances, there are very few comedians who succeed in making people laugh more than he does.” And none other than Jerry Seinfeld recruited Barry for to appear on his web-based series Comedians in Cars Getting Coffee.“I’ve known Jerry to say hi in the clubs when we run into each other, but we never had a real conversation before. So I was surprised to get that phone call from him personally asking me to do the show. It was very flattering,” said Barry, who grew up in Florida and graduated from the University of Florida with an English degree in 1986.After spending a couple years as a drummer in an indie rock band (“I was never particularly good”), Barry lined up a slot at a Florida open mic stage in 1987 at one of the hordes of comedy clubs opening up throughout the US.“It was during the comedy boom of the ‘80s and it was pretty easy to get onstage,” said Barry, adding that he had been influenced by the usual funnyman pioneers like Richard Pryor, Steve Martin, George Carlin and Andy Kaufman, as well as a then-little known standup comic from the Midwest named David Letterman.“I was a combination of class clown and shy when I was growing up – sort of a gutless class clown,” he recalled.“I would never do anything that would get me sent to the principal’s office. I was too scared to raise that much trouble.”Barry proved to be a better comedian that drummer, which is a good thing for people who like to laugh. Honing his style through countless standup shows, he discovered what works and what doesn’t. But occasionally, audiences still surprise him.“It’s terrifying to get on stage to make people laugh, and they don’t,” said Barry. “You feel terrible if it doesn’t work, but it also depends on the situation. Sometimes you walk into a situation that you know is not going to work. If the crowd has been terrible the entire night, then you might just be their next victim.”Ironically, Barry went from victim to aggressor when he nabbed a role the 2009 Darren Aronofsky film The Wrestler starring Mickey Rourke. Playing a supermarket manager who demeans Rourke at any chance, Barry got a chance to be the scrawny bully.“It was kind of surreal to be verbally abusing Mickey,” said Barry. “I always admired him but he was someone I had never met. I had to keep reminding myself, ‘it’s an acting job, he knows you’re acting – don’t hold back.’ It was kind of weird though to look at this huge guy and say shitty things to him.”Barry survived the film without receiving a whupping from Rourke and is looking forward to his first visit to Israel.“I had one joke about a yarmulke that I don’t know if I should bring back, it’s so old,” said the Jewish comedian. One theme he won’t be touching for sure is politics.“It’s not my strength, and I don’t like it when people make political comments despite understanding maybe two percent of what they’re talking about. I prefer to stay away from preachiness.”Saying that he was aware of the success of the ongoing Comedy for Koby tours organized by Los Angeles-based comic Avi Liberman for the Koby Mandell Foundation, Barry said he was looking forward to trying out his material on Israeli audiences.“I heard that Avi’s shows are good and well-received. And my friend Sarah Silverman played at the Zappa Club and she said it was really fun,” he said.As long as they know about Walgreens, that is.