Who says the old days are gone and romance is dead? Want to open a bottle of wine on the breezy balcony and greet your lover with a smile? There’s Engelbert. 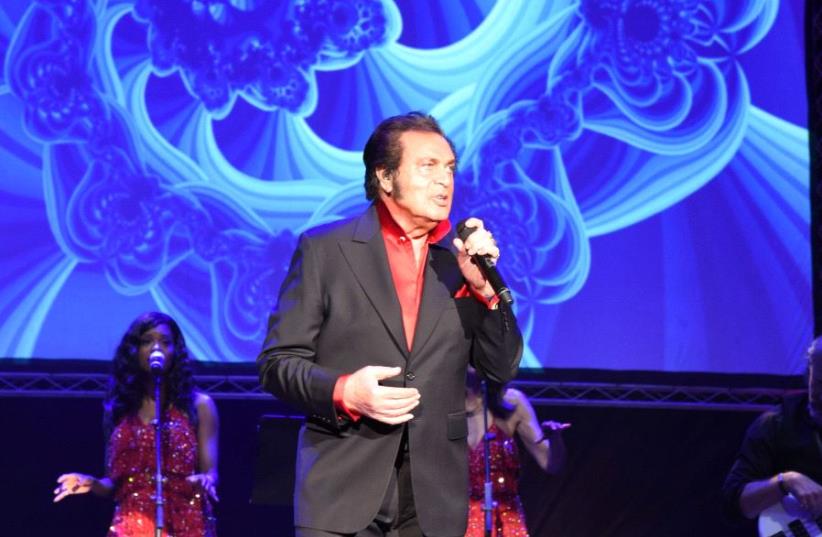 Engelbert Humperdinck
(photo credit: SARAH DEMMI LEVIN)
Advertisement
They say time cures all wounds. Well, I think it’s Engelbert Humperdinck.The lucky love-stricken steadfast fans who strolled down memory lane this week with the British crooner [during one of his performances in Haifa, Jerusalem and Tel Aviv] were treated to a tear-jerker of an evening.The vibrations were romantic as Engelbert came on stage wearing a black suit over a brilliant red satin long sleeved shirt, with sparkling diamond cuff links and buttons closed up tight around his neck, before a packed audience at his Monday night show in the Sherover Hall at the Jerusalem Theater. (Don’t worry ladies, he eventually took off the coat and showed us his chest.) Prepping the packed audience, his six-piece band and two sexy go-go dancers in red sequined mini-dresses sang a short interlude, while a black and white 1960s television clip of Dean Martin introducing the then young Engelbert, which aired on the The Dean Martin Show, set the tone for his worldwide ‘The 50th Anniversary Tour.’ Israel is his 10th stop.Wiggling his hips and thrusting his chest out, Engelbert said, “I’m celebrating my 50th year in show business.I must be doing something right. I act like I’m 50, I sing like I’m 50, and I do everything like I’m 50.”His voice elicited some involuntarily gasps from the crowd as Engelbert began a montage of classics, “You’re The Best Thing,” “A Man Without Love.” During “After the Lovin’” it was hard to see the stage through the forest of arms waving, reaching for heaven or holding cell phones high trying to capture the moment.In the packed concert hall, surrounded by swaying bodies and with people singing at the top of their lungs, the grey-haired grandmother sitting beside me (and who for obvious reasons wishes to remain anonymous) gingerly piped from the corner of her mouth: “These songs moves things in my mind and places in the body that I thought I’d never think or feel again.Wow, this feels amazing. I want to feel like this all the time, loved and romanced.”After slugging back a shot, the tempo stepped up with “Quando Quando Quando,” when Engelbert invited his two singers for solo performances at center stage, followed by lead guitarist Johann Frank mastering a rock and roll flair with a few hot rhythm licks of his own, before, once again, wooing us down a roller-coaster of memories with a “Welcome To My World,” “I Don’t Want to Call It Goodbye” and others.Taking another shot, he then surprised us with “Bridge Over Trouble Water” and “On Broadway” before giving the rest of his bands solos in “I Can’t Stop Loving You.”The sound was almost visible from one tear-jerker to the next. And with a talent that bumped The Beatles’ “Strawberry Fields” off the charts with “Release Me” in 1967, selling 85,000 a day, 1.5 million albums and a chart record of 63 gold albums, nothing less was expected, even five decades later.The show wrapped up way too soon with his most popular songs, “The Last Waltz” and “Release Me,” but not before throwing in a few new songs and asking us our opinion on them.Being treated as part of the family, Engelbert gave us his heart, soul and literally his sweat, by handing out several of his used red handkerchiefs to the women, and one man, dancing beside the stage at the end of the night.Who says the old days are gone and romance is dead? Want to open a bottle of wine on the breezy balcony and greet your lover with a smile? There’s Engelbert.