To celebrate the 92nd birthday of veteran violinist Haim Taub, a congratulatory concert was performed as part of the Opus Festival 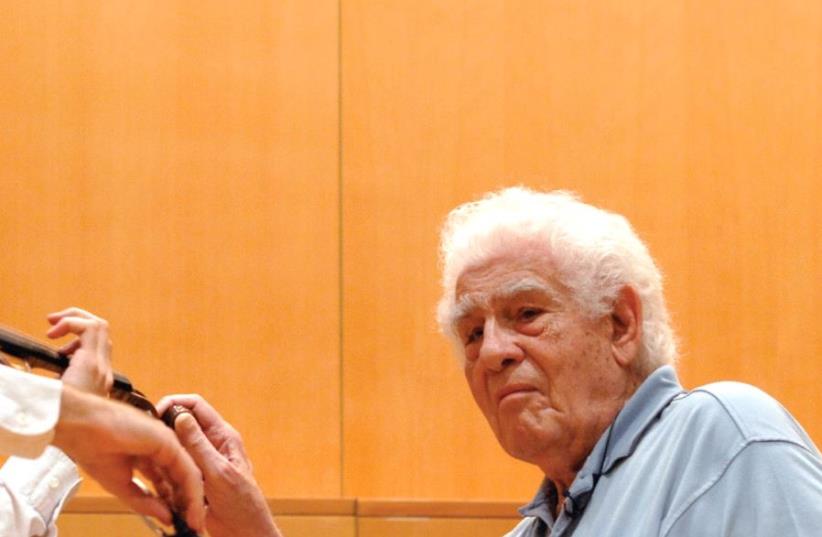 RENOWNED ISRAELI violinist Haim Taub teaching a 2011 Keshet Eilon master class
(photo credit: Wikimedia Commons)
Advertisement
To celebrate the 92nd birthday of veteran violinist Haim Taub, my classmate, who for several decades was the first violinist of the Israel Philharmonic Orchestra, a congratulatory concert was performed as part of the Opus Festival.The world premiere of a new Israeli work, Frequent Flyer, for two violins and chamber orchestra, was composed by Oded Zehavi for the occasion. Despite its suggestive title, its connection with the music did not become quite clear. Its first and last fast movements might perhaps evoke the velocity of an airplane, while the slow one could portray the relaxed slumber of a business-class passenger – but then, this was after all no more than the common structure of a standard classical concerto. The work will come in handy whenever a 15-minute Israeli alibi piece is required for a classical concert program. The soloists, Guy Braunstein and Matan Dagan, performed the piece with remarkable mutual attentiveness.Under the motto “Everything you can do, I can do better,” Taub’s disciple Braunstein attempted to improve on Tchaikovsky by an arrangement of three pieces from his Swan Lake and Eugen Onegin. He performed them with brilliant virtuosity, and Taub should be proud of his former pupil.Violinist Kolja Blacher had come especially from Germany in honor of Taub to be the soloist of Brahms’ Violin Concerto. He sang the work on his violin with uncommon purity of sound, a fresh, energetic and lively tempo in the fast movements, and genuine Romantic expression of the poetic slow one. It was a performance such as one is only seldom privileged to hear of this frequently played work.The orchestral part was provided expertly and impressively by the Israel Camerata led by guest conductor Roberto Paternostro.