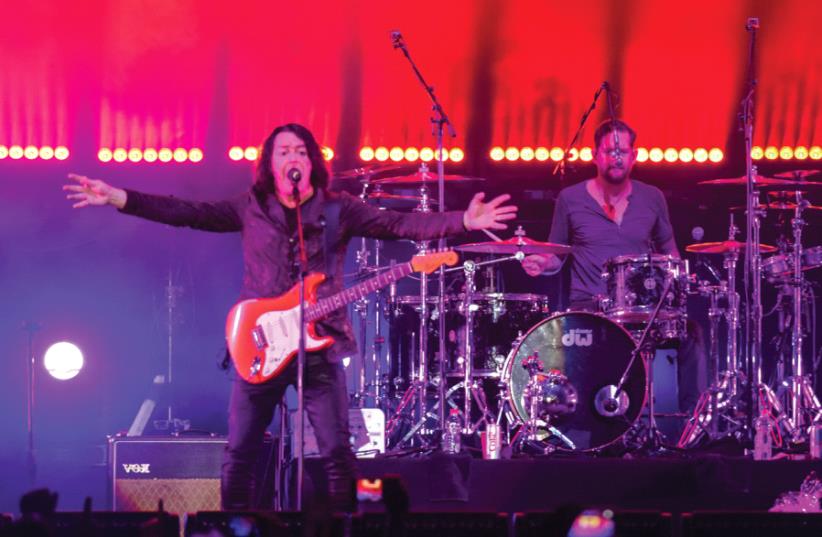 TEARS FOR FEARS made sure their army of loyal fans were not left disappointed at Tel Aviv’s Menora Mivtachim Arena.
(photo credit: LIOR KETER)
Advertisement
TEARS FOR FEARS
Menora Mivtachim Arena,
Tel Aviv, July 5 •Iconic ’80s pop duo Tears For Fears, co-founded and co-fronted by Roland Orzabal and Curt Smith, certainly gave local fans something to shout about Wednesday night at Tel Aviv’s Menora Mivtachim Arena. Despite no new album since 2004’s reunion effort Everybody Loves a Happy Ending, the band continues to be a major draw.The stage went black to Lorde’s 2013 cover of “Everybody Wants To Rule The World” before Orzabal and Smith came out to perform the original version, with the instantly recognizable high-register guitar riff getting the almost sold-out crowd up on its feet from the outset.Between songs, Orzabal addressed “the beautiful people of Tel Aviv” saying that his family had visited the many national sites in this wonderful country. Smith interjected that he didn’t know why the band had taken so long to get to Israel, but “we are here now!” The show included an assortment of tracks from across their varied career, from the mid-‘80s imperial-phase big hitters such as “Mad World,” “Pale Shelter” and “Change” to the lesser known tracks from their last few studio albums, Elemental and Everybody Loves A Happy Ending.Orzabal and Smith meshed wonderfully on stage, with Orzabal’s voice sounded as deep and dynamic as ever, especially on “Sowing the Seeds of Love” and “Woman in Chains.” He seemed to have absolutely no problem still nailing the falsetto sections.The biggest surprise in the set was a cover of Radiohead’s “Creep,” which ended up being one of the highlights of the evening, with the audience quickly starting to sing along after gasping at the realization of what the band was playing.Tears for Fears closed out with “Head Over Heals” but returned for “Shout” after the crowd refused to leave. It was a truly deserved encore. It seemed that the whole crowd was caught in a perfect moment of reliving the ‘80s.
Advertisement
Subscribe for our daily newsletter