Comprised of 10 male senior students from Yale University, the a cappella group is the most recent incarnation of the iconic ensemble that originated at the Ivy League college in 1909. 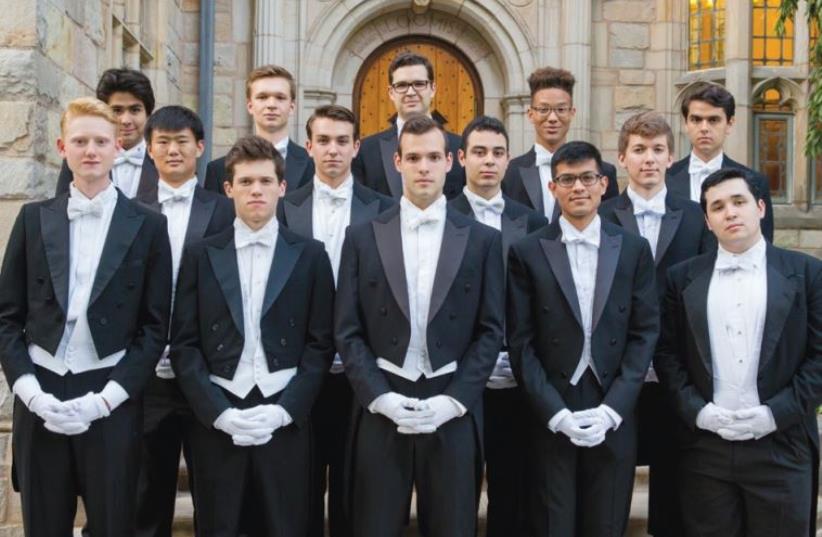 ORI SIVAN’S ‘Harmonia’
(photo credit: ITIEL ZION)
Advertisement
The Whiffenpoofs performed to a full house Sunday evening in the beautiful auditorium of the Jerusalem International YMCA.Comprised of 10 male senior students from Yale University, the a cappella group is the most recent incarnation of the iconic ensemble that originated at the Ivy League college in 1909.Before they came on, a set of five songs was performed by the YMCA Jerusalem Youth Chorus. Consisting of a large number of Israeli and Palestinian high school students, the chorus was led by its founder and director Micah Hendler, a former Whiffenpoof himself.Then the Whiffenpoofs took the stage. Dressed to the hilt in tails and white bow ties, the elegant ensemble was cool, confident and classy.They started off in unison with a duo of Czech and Swedish songs. Then one of the group members stepped forward to offer a very melodic rendering of the Muppet song “Rainbow Connection,” with his confreres providing vocal back-up.Next up was a lovely, lyrical rendition of the 1956 song “When Sunny Gets Blue,” followed by another soloist singing John Mayer’s “I’m Gonna Find Another You.” This was succeeded by the whole group harmonizing the 1938 Sammy Fain and Irving Kahal classic “I’ll Be Seeing You.”The Whiffenpoofs’ repertoire that night of some dozen ditties was a well-balanced combination of old and new. They spanned the eras, gliding easily between golden oldies such as Cole Porter’s “Just One of Those Things,” Kurt Weil’s “September Song,” Elvis’s “Can’t Help Falling in Love” and The Animals’ “The House of the Rising Sun” and more contemporary numbers such as Adele’s “When We Were Young” and Selena Gomez’s “The Heart Wants What It Wants.”While their voices served admirably as their main musical instrument, the Whiffenpoofs also accompanied themselves by alternately snapping their fingers, tapping their toes and clapping their hands.Halfway through the set, the Whiffenpoofs introduced themselves, each member going up to the microphone and saying his name and giving a facetious description of his university major and life’s ambition. For example, one declared, “I’m majoring in art and auto mechanics. I want to make a van go [a Van Gogh].”The group ended the concert with the traditional “Whiffenpoof Song,” which contains the familiar refrain “We’re poor little lambs who have lost our way. Baa, baa, baa.”Overall, the Whiffenpoofs were totally delightful. Poised, polished and utterly professional, they put on an extremely enjoyable show. My only regret is that their stint on stage seemed so brief. We had just a whiff of the wonderful Yale male ensemble, and then poof! they were gone. What a shame.