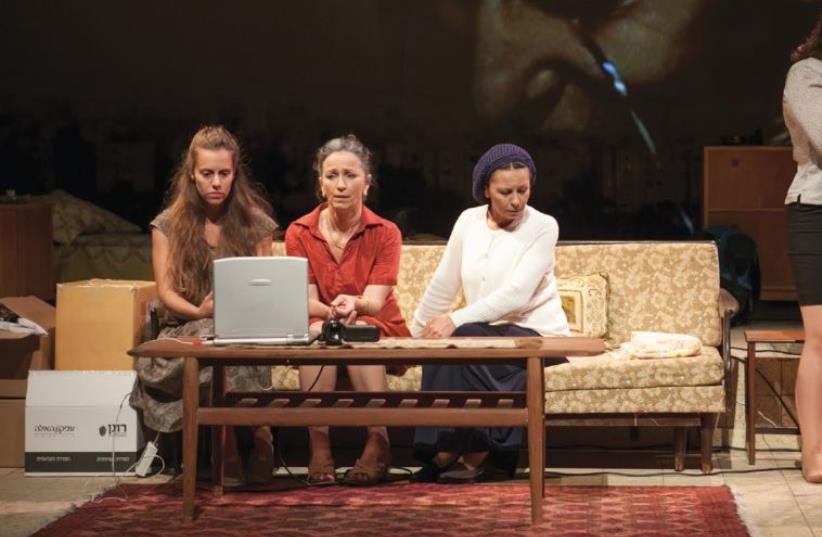 Azoulay Hasfari’s Yom Kippur
(photo credit: MAAYAN KAUFMAN)
Advertisement
Judith Aharon’s cluttered set metaphorically illustrates the four sisters’ cluttered emotions in the overheated soap opera that is Azoulay Hasfari’s Yom Kippur. Its Hebrew title is “Slichot” or the days of penitential prayer immediately preceding the fast day of Yom Kippur (the Day of Atonement), the holiest day in the Jewish calendar, a day so important that it even pre-empts Shabbat, the day on which man seeks forgiveness firstly from his fellow- man and only afterward from his God.Understanding this is essential to the play, which begins shortly before the eve of Yom Kippur and ends at the Ne’ila, or closing of the fast, because its four protagonists are deeply estranged, and have been for years.The plot acts as scaffolding for the sisters’ agonized interactions. Not only has their mother has disappeared without saying where she’s going, she has also returned her Netivot apartment to Amidar*.The sisters arrive in response to a summons from their youngest, Amira (Yael Eitan). They are successful businesswoman Fanny (Maayan Turgemann), ultra-Orthodox and mother of eight daughters Evelyn (Evelyn Hagoel) and busybody homemaker Malka (Orly Tobaly).That they are Moroccan, Mizrachi – and were therefore marginalized/discriminated against – is here actually irrelevant. What’s relevant is that Beersheba is doing “Slichot” at a time when migrant/refugee populations are flooding places that do not at all want them, certainly including us.Over Yom Kippur then, as they trade theories about Mum’s disappearance, hurl virulent abuse at and yet reveal their fierce affection for one another, they lay bare the context and tenor of the selves and the pain they’ve been hiding, especially in regard to their mother.For each of them, she is someone else, and when she finally explains (as she does on Amira’s computer), they are shocked into realtime comprehension of Mama – the superb Gila Balish – and themselves.Turgemann and Hagoel are especially fine, but all four actresses give a committed, passionate, very truthful performance.Katia Shepeliavaya provides a powerful video complement to the live action and Yehudit Aharon’s costuming is appropriate, but why does well-off Fanny not have a change of clothing like the others, not to mention the tawdriness of the suit she does wear. It’s a small but important carelessness.Yet it’s not the production but the play that’s the problem. It inhabits so continual an emotional high that we become deaf to what it may be trying to say about immigrants, about mother-daughter relationships, about family perceptions...less really can be more.

*Amidar was, and is, a government corporation that provided mass-produced and affordable rental housing to immigrants, especially to the major immigrations from Morocco and other Arab nations in the 1950s. Netivot (est.1956) was one of the so-called development towns that were created around that time. Sited between Beersheba and Gaza it’s a favorite target for enemy rockets.