Filmmaker Inna Rogatchi talks to the ‘Post’ about her documentary based on never-before-released intimate and friendly conversations with the legendary Nazi-hunter. 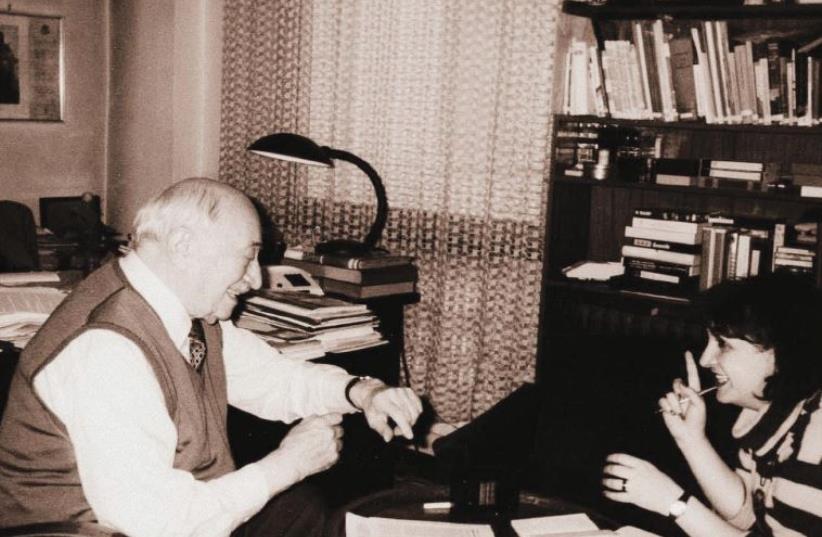 LEGENDARY NAZI hunter Simon Wiesenthal (left) in conversation with filmmaker Inna Rogatchi from the documentary ‘The Lessons of Survival.’
(photo credit: Courtesy)
Advertisement
Many of us have been fortunate enough to benefit from the wisdom of a dedicated schoolteacher, a mentor or just an observation made in passing which helped to change our perspective on life. Inna Rogatchi says she learned a lot from Simon Wiesenthal. Some of the gems she gleaned from the celebrated late Nazi hunter who, like Rogatchi, hailed from the Ukraine but later took up residence in a different country – he lived in Vienna and Rogatchi now resides in Finland – eventually found their way into Rogatchi’s moving documentary about the Nazi hunter’s work and life, The Lessons of Survival.The film, which bears the self-explanatory subtitle “Conversations with Simon Wiesenthal,” was completed in 2013 and has been screened at various venues around the world. It has finally made it over here and will be shown at the Tel Aviv and Haifa cinematheques today and tomorrow respectively, to mark the 10th anniversary of Wiesenthal’s passing.Rogatchi’s Wiesenthal connection began with a visit to a well-known bookstore in London.“Books are important to me,” says the filmmaker, who also has several volumes to her name and is an art photographer and educator. “In the early 1990s I went to the biography department of Foyles and saw Alan Levy’s book [Nazi Hunter: The Wiesenthal File]. It’s an excellent book. It’s not too sugary and it’s objective.”Rogatchi was so taken with the Levy tome she thought it would be a good idea to share its contents with her fellow Russian-speakers.“I knew they [Russians] didn’t know anything about it, because when I proposed the idea of translating The Wiesenthal File into Russian, they said ‘Wiesenthal who?’” The venture eventually led the filmmaker to the door of Wiesenthal’s offices, at his Jewish Documentation Center in Vienna, which he established in 1961, near the former Viennese Gestapo headquarters on Morzinplatz.“I wanted to meet Alan to ask for authorization to translate the book into Russian. I went to the [international writers’] PEN Congress in Prague in 1993, where I met Alan, and later I went to Vienna to meet Simon.”That kick-started a 12-year relationship between Rogatchi and Wiesenthal, which began as a respectful professional confluence that quickly turned into a close friendship, and which ultimately spawned The Lessons of Survival. It also led to Rogatchi doing her bit to try to track down Nazi war criminals.“We tried to get information in Baltic countries, and to help trace people for Simon,” she says.So, the filmmaker became part of the Wiesenthal organization? “It would be going too far to say I worked with Simon on this,” Rogatchi points out. “I just got a little of information here and there, asked some questions and made contact with some authorities. You could say I addressed the issues, sometimes in Finland, sometimes in the Ukraine.”In interviews, Wiesenthal always came across as a genial character, and very different from the image of a hardnosed character driven to hunt down Nazis come what may.“I found Simon to be bigger than a Nazi hunter,” says Rogatchi. “I found his approach very humanistic.”That suited her down to the ground.“I was also looking for more humanism in life,” she adds. “I found Wiesenthal’s approach to life, based on his Holocaust experiences, to be more humanistic.”Like famed Jewish Viennese psychotherapist Viktor Frankl, who spent three years in concentration camps, Wiesenthal also came out of World War II determined to maintain a healthy approach to life and humanity in general.Rogatchi notes, however, that Wiesenthal’s gentle exterior hid a razor-sharp mind.“He was soft in appearance and he was very meticulous. He was blessed with an exceptional memory. He trained as an architect and I think the engineering part of him was important.”Wiesenthal’s offices were a maze of folders and files stacked on shelving and in drawers all over the place.Wiesenthal was clearly not into the latest information technology, and Rogatchi says he didn’t really need a computer.“He had an excellent memory. I have so many hours of tapes with him and he never repeated himself. Sometimes he had as many as eight interviews in a day.”That necessitates not only a well-developed facility for storing data, but also stamina.“He was on a mission,” says Rogatchi simply.Rogatchi says she got far more from Wiesenthal than just information about his life and his lifework.“Every time I sat with him I learned something which was important for me. That’s not about history and facts, although I got a lot of that too, but it was more about his attitude. For instance, I would ask him why he didn’t look for some Nazi or other, and he would calm me down. At first I thought that maybe he was aging and slowing down. But then I thought he was right. He had a sort of wisdom that you get from age and experience, and also judgment.”The documentarist says that she never caught Wiesenthal allowing emotion to cloud his better instincts and clarity of mind.“He was not vengeful, which is probably a gift from God – you are either vengeful or you’re not. You could be like [late Polish-born Israeli Nazi hunter] Tuviah Friedman, who was not vengeful but he was bitter. Over the years I have thought about Simon a lot. He lost 89 members of his family [in the Holocaust]. How do you live after that? How are you not driven by pain and revenge? I don’t know the answer to that.”But Wiesenthal was driven, by a life mission.“His wife Cyla once said to him, ‘you trained as an architect and you are going on, for ages, with this [hunting Nazi war criminals].’ And he told her that she was right, but that he would feel like a traitor if he didn’t hunt down Nazis.”Unexplained personality traits notwithstanding, the audiences at the Tel Aviv and Haifa cinematheques, later this week, should gain a far deeper insight into one of the most fascinating characters of the 20th century.

The Lessons of Survival: Conversations with Simon Wiesenthal will be screened at the Tel Aviv Cinematheque tonight at 7 p.m. and the Haifa Cinematheque on October 8 at 5 p.m.
Advertisement
Subscribe for our daily newsletter