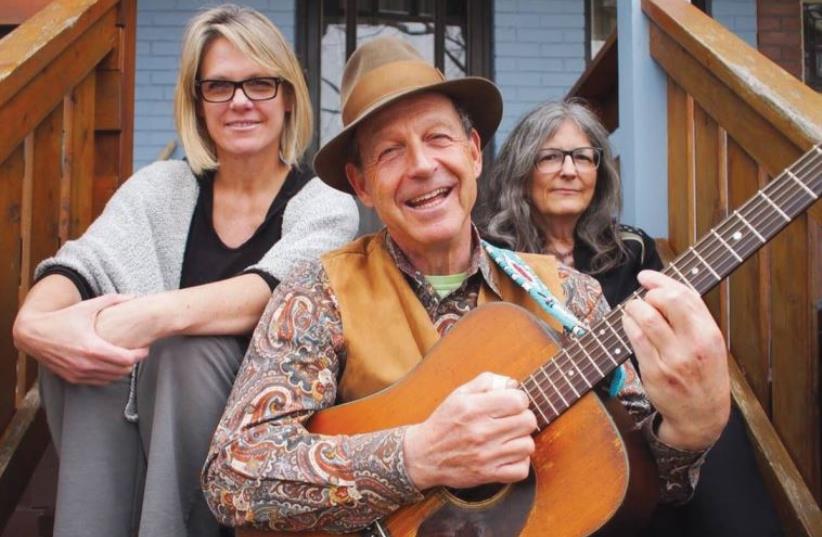 CANADIAN BLUESMAN Ted Cooper seen here with his group Teddy and the TuvTones.
(photo credit: PIET CORR)
Advertisement
Ted Cooper has been traipsing the highways and byways of this fair old country for the past week or so, but that is nothing new for the sixtysomething-year-old Canadian- born blues guitarist and singer.Cooper has two more dates left in his current foray to these shores, with today’s 10 p.m. show at Mike’s Place in Herzliya along with old sparring partners harmonica player- vocalist Dov Hammer and guitarist Asaf Rosov, and Saturday’s slot at Café Kilimanjaro, Zichron Ya’akov (9 p.m.) winding up a seven- date national tour.But pounding the blues beat over here is nothing new for Cooper, although he has not been a regular fixture on the Israeli music scene for over two decades. He first came over here in 1977, with no serious intentions about making his home here. “I just came to visit, for six weeks, just traveling around.I didn’t really have any connection to Israel,” he recalls. “Yes, I am Jewish, but at the time it was just another country to me.”Cooper had already chalked some pretty significant globetrotting distances, taking in places like India, Indonesia and Thailand, but, Israel engaged or not, he quickly found himself bitten by the Jewish homeland bug.“When I got here I realized, wow, I belong to this exotic people. That never occurred to me until I was here. I felt so at home here and I thought ‘why, what is this?’ I realized this is where I come [from]. This is my people.”That epiphany was followed by aliya in 1978, with the bluesman first setting up home in Kibbutz Ein Harod Meuhad near Afula, and later in Kibbutz Adamit near the Lebanese border. Life was good out in the sticks for the twentysomething Canadian, but he wasn’t getting his blues buzz.“I needed to play music,” he says. “So I needed to move to the city.”Cooper initially considered moving to Tel Aviv but eventually decided on Jerusalem, after landing a regular berth at the legendary Tavern on Rivlin Street in quaint Nahalat Shiva, which was also home to seminal local anglo band The Taverners.“We played there every night,” he says. “It was great. That’s not something you can do now. These days it’s all one-nighters at a different place. But things were different back then.”Blueswise, it all started for Cooper around 50 years ago.“When I was 12 I listened to the Beatles and the Rolling Stones,” he says. Nothing strange about that, although the youngster took a more serious approach to the pop and rock hits, and began to explore the sources.“I started looking at the names of the people who had written the songs the Stones were singing,” he explains. “I saw the name of [iconic blues musicians] John Lee Hooker, and saw the name Muddy Waters. My friends and I decided we wanted to get records by those guys. That’s how I got turned onto the blues.”A year later the teenager received a giant push even deeper into the music.“When I was 13 I met John Lee Hooker in Toronto. We spent the whole day with him in his hotel room. He was playing at a club there for a few weeks, and me and my buddies went to see him at the coffee house where he was playing. In between sets we went up to him. He was wearing this silk shirt and he looked so cool.”Youthful insouciance and Jewish chutzpa did the trick.“We told him we had a blues band, and he was so nice to us and he said why don’t you guys come over to my hotel. He was staying at some dive-in hotel and we went over the next day, knocked on his door and we spent the whole day with him. He was playing guitar, watching a baseball game on TV. It was great. That really got me going.”The blues wasn’t his only source of inspiration.“I was into Dylan and I thought this guy hasn’t got such a great voice, anyone can do it, I can do it too.” Cooper also began to set pen to paper. “I started writing songs when I was about 15. It’s not that difficult to write the lyrics for a blues song. Dylan and The Band were big influences on me.”After his jaunts here and to the Far East, Cooper returned to Canada and advanced his instrumental skills as a member of a country western band.“I played bass in the band. I like to do other stuff too, not just blues,” he notes. “I didn’t feel comfortable, yet, being on stage. Being the bass player in that band was a way to be on the stage and not be the frontman.”A couple of years or so later he made aliya and soon became a fixture on the Jacob’s Ladder Festival roster, and played with the likes of US-born rock singer Libi and, later, with Hammer and Rosov, who largely learned their craft from him.For now, Cooper is just delighted to be back here doing what he loves best, but says he may return to these shores permanently before not too long. Should that happen, the Israeli blues scene will be so much the richer.