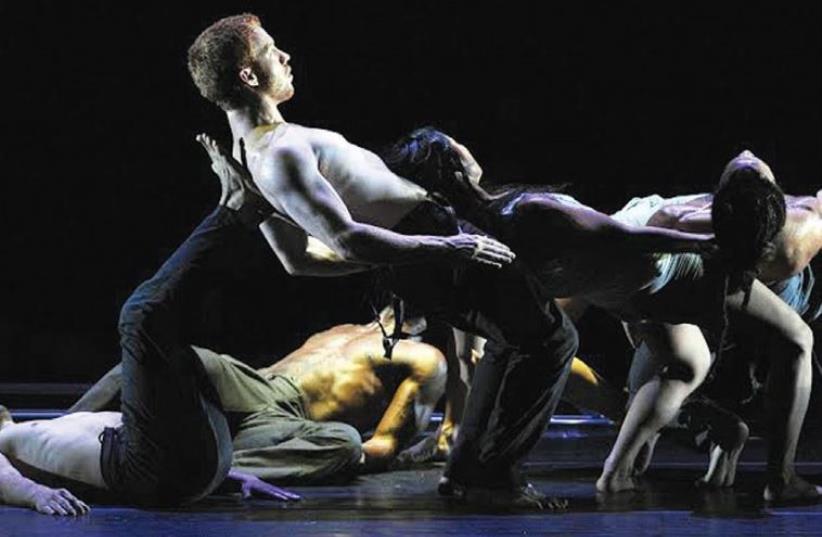 PILOBOLUS PERFORMS ‘Automation’ by Sidi Larbi Cherkaoui.
(photo credit: Courtesy)
Advertisement
Forty-five years ago, a small group of inquisitive college students started an experiment which led to highly imaginative dance theater, with a new, more athletic perspective of the dancing body, named Pilobolus.Trying to stay relevant after so many years, the company opened up to more international collaborations in search for fresh stimulation.There are five pieces being performed on their current tour in Israel, two of which are creations resulting from those collaborations: Automation, by world renowned choreographer Sidi Larbi Cherkaoui (Belgium) and the The Inconsistent Pedaler, with Shira Geffen and Etgar Keret (Israel), who didn’t come from the dance world but from other disciplines including literature, theater and film.Geffen and Keret, working with two of the company’s artistic directors and company members to create Pedaler, the story of a dysfunctional family going bananas on grandpa’s 99th birthday. The only one who can hold the pieces together is the daughter, who rides her stationary bicycle. Using slapstick humor, surrealism and few prayers that it will work, Keret and Geffen just manage to cause theatrical mayhem that is faintly funny, but contributes little to the company’s artistic standards.One must mention another Israeli couple, Inbal Pinto and Avshalom Pollak, who choreographed Rushes (2008), a brilliant, cohesive and highly challenging work for Pilobolus.Perhaps the most innovative work of the evening was the five-minutes piece All Is Not Lost, in cooperation with American rock group OKGo, that was danced on high glass table and filmed live from underneath. The result was screened concurrently on stage.Megawatt, which closed the evening, best portrayed the Pilobolus’ archetypal dancer: able bodied, agile and daring, willing to do anything to amaze.Pilobolus, refreshed as it is, still maintains its original artistic path that celebrates the human body and its endless ways to savor movement, enhanced by interaction with others. The company’s spirit thrives on curiosity, imagination and perfection, spiced with some tongue-in-cheek humor. A refined crowd pleaser, Pilobolus always manages to keep new cards up its sleeve.