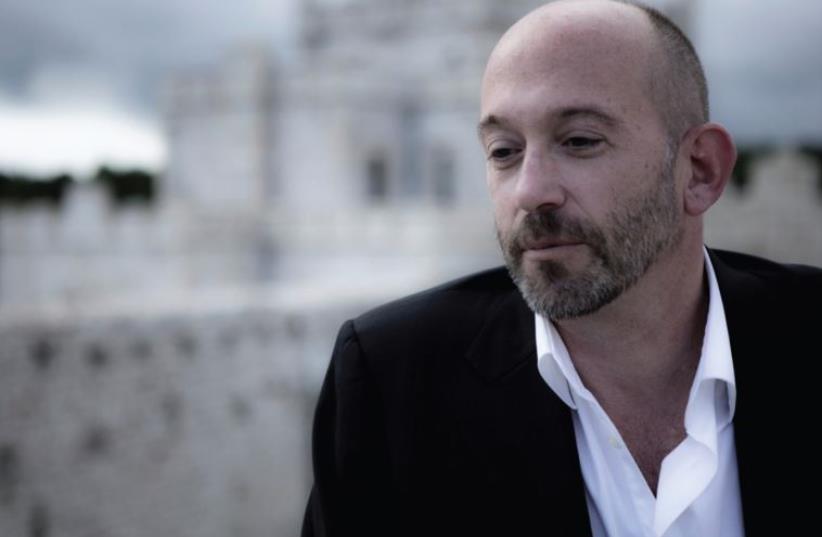 Kenneth Weiss
(photo credit: ARTHUR FORJONEL)
Advertisement
Kenneth Weiss will not be dancing with a divine being over here, but he says he will be happy to spread things around and go out on a limb on his upcoming visit to these parts. The American-born harpsichordist and conductor will join forces with Swiss soprano Sophie Graf and the Israel Camerata Jerusalem for a four-concert foray, presenting three performances at the Tel Aviv Museum of Art (January 15 to 17) and one at the Jerusalem Theatre (January 19).Weiss will fill the conductor’s role at the Dancing with Venus concerts and will slip in a harpsichord recital at the Israeli Conservatory of Music in Tel Aviv on January 18, when he will perform all 24 pieces of Book I of Bach’s Well-Tempered Clavier.There will also some be master classes at the conservatory betwixt and between, in what promises to be something of a hectic schedule for Weiss.While there is a strong French Baroque aroma to the main lineup, in fact there are all sorts of sentiments and energies in the four-piece repertoire Weiss will present with Graf and the ensemble. The concert will open with Les éléments by innovative French composer Jean Féry Rebel, which addresses the Creation and is considered one of the boldest works of the time. That will be followed by the Israeli premiere of the infrequently performed lengthy cantata Cantata la toilette de Venus by 18th-century French composer François Colin de Blamont and a rich offering of orchestral suites and arias from Jean Philippe Rameau’s operas Pygmalion, Dardanus and Platée.There will also be an item from nearer our own times in the form of Ancient Airs and Dances, Suite No.3 by early 20th-century Italian composer and musicologist Ottorino Respighi. However, there will be nary a dissonant contemporary classical phrase played in anger in the rendition of the latter work. Respighi’s main area of interest as a musicologist lay in the music of the 16th, 17th and 18th centuries, and he composed pieces based on the music of these periods. He also wrote a number of operas, the most famous of which is La fiamma.“I think it is a very interesting and varied program,” says Weiss, adding that his preparation for the concerts took him along a learning curve of his own. “The Respighi is a very interesting piece which I wasn’t familiar with before I came on board for this project. He was a musicologist, and he was interested in and studied the music of the Renaissance and early Baroque, and the third suite of his Ancient Airs and Dances is based on Renaissance music. It is a kind of transcription orchestration.”Weiss says he is fascinated by the marriage of old and new.“I think that is a very interesting thing to do with a modern orchestra because it is already written for a modern orchestra, so it opens a certain access to the music with notation that the players are familiar with,” he says.He is also looking forward to getting his teeth into the Blamont work.“This cantata is very interesting to do with modern players. It is rarely done, and it is a very rare piece. Blamont is not a major composer, but it is a very well-written piece with a lot of charm. I have already worked with Sophie Graf on this. She sings this piece beautifully,” he says.Weiss is equally enthused about the Rebel slot.“We complemented the Blamont work with the Rebel, which is an amazing piece that describes the chaos of the Beginning [of the world]. It has four elements that kind of emerge after the Big Bang.That’s an incredible piece from the Age of Enlightenment,” he says.The Rameau items are not considered too run of the mill, either.“Rameau is a fantastic orchestral composer, and the works are not usually played by modern orchestras, so I think that is a wonderful opportunity,” Weiss notes. “So the program is mostly French; but, of course, Respighi was Italian, and I think this is going to be a lot of fun.”Rameau also had a predilection for the harpsichord, which suits Weiss nicely.“I have worked with transcriptions I did myself, of Rameau operas and ballet [music], and I am very familiar with his works. We will be doing very colorful music of his, very tender and also very daring harmonically, very descriptive in terms of emotions. I think this is very good music for the public, and I think the audiences in Israel will have fun with it,” he says.Weiss bonded with the harpsichord as a teenager.“I started learning the piano in New York, where I grew up, at the age of five, like most youngsters,” he recalls. “I first played harpsichord when I went to the conservatory, as a pianist, at the age of 17. I fell in love with the instrument, and I fell in love with the repertoire.”The instrumental shift opened up a whole new world of earlier works for Weiss.“A lot of times, pianists are not familiar with any repertoire for the keyboard from before Bach,” he notes. “There is 250 years of repertoire from the second half of the 16th century, and there are lots of works for the keyboard from that time. That was a very exciting discovery for me to make. I think it was the instrument and the repertoire that made me a convert [to earlier music].”It was a gradual transition for Weiss from piano to harpsichord, but he strongly recommends that his fellow keyboardist spread their fingerwork wings.“I teach harpsichord, as well as playing. I think keyboard players, if they have the opportunity, should try to play on all different keyboards – more historic pianos, organ and harpsichord – to really understand. There is so much music that was written for different keyboard instruments. Each instrument calls for a different understanding of the repertoire, so I think that is healthy,” he says.

For tickets and more information: 1-700-552-000 and www.jcamerata.com
Advertisement
Subscribe for our daily newsletter