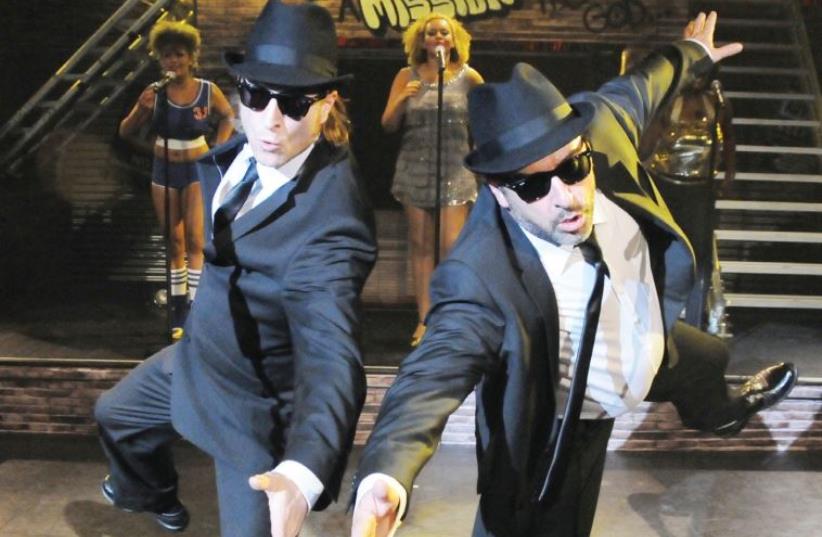 The tribute band Blues Brothers
(photo credit: PR)
Advertisement
FILMS 1 BEHIND STRATEGY LINES
In the comedy drama Our Brand Is Crisis, a Bolivian presidential nominee recruits an American management team to help with the campaign. The team is led by Jane Bodin (Sandra Bullock), who is considered a brilliant strategist, despite her questionable sanity. She agrees to take on the position in order to outdo Pat Candy (Billy Bob Thornton), a long-term rival who is working for the main competing candidate.

MUSIC 2 THE FESTIVAL OF TOLERANCE
The Holiday of Holidays festival in Haifa returns, offering the public dozens of free activities including art shows, open houses, film screenings, tours, street shows and food markets. As every year, there will also be vocal concerts in Haifa’s churches.

December 8 to 24 at Beit Hagefen, Wadi Nisnas, The German Colony and the lower city. For a detailed program, go to www.haifahag.com.

3 REGGAE, ROCK AND ARAB MUSICJazzall, a new ensemble with influences from reggae, soft rock, R&B and pop, will be part of the Haifa A-Sham Festival.Other Arab-influenced concerts include Dudu Tassa and the Kuwaitis, who will perform with singer Nasrin Kadri, as part of the A-Sham Arab Food Festival, which takes place as part of the Holiday of Holidays festival in Haifa.Friday at 12:30 p.m. and 1:30 p.m. at 24 Hanamal in Haifa. For more information: (04) 835-7440; www.downtown.co.il.

4 A CLASSICAL JUBILEE
Renowned composer Noam Sheriff will conduct the Israel Chamber Orchestra, now celebrating its 50th anniversary, in its next concert tour. The center of the program is Sheriff’s composition Prayers.

On Wednesday and on December 22 at 8:30 p.m. at the Menora Mivtahim Arena in Tel Aviv.

ART8 MATERIALS COME TO LIFE
“Crafted Matter” is the first all-Korean sculpture exhibition in Israel. It includes 26 works of nine contemporary South Korean sculptors. Using materials such as wood, metal or granite with amazing expertise allows the artists to go beyond the familiar boundaries of sculpture.

9 DAISIES, DAISIES
Rock ’n’ roll super-group Dead Daisies is returning to Israel for two shows, with surprise guests. Combining members from Guns N’ Roses, Thin Lizzy, The Cult and others, the Daisies have been performing all over the world for a long time. Band leader Richard Fortus says, “The Israeli crowd is our favorite.”

10 SINGING THE BLUES (BROTHERS)
The tribute band Blues Brothers Approved is coming to Israel as part of a world tour. Performing hits from the popular 1980 film, Approved presents a dedicated celebration of rhythm and blues.December 19 at 8:30 p.m. at the RK Arena in Haifa. December 20 at 8:30 p.m. at the Mann Auditorium in Tel Aviv. For tickets and more information: www.leaan.co.il/theblues- brothers/.