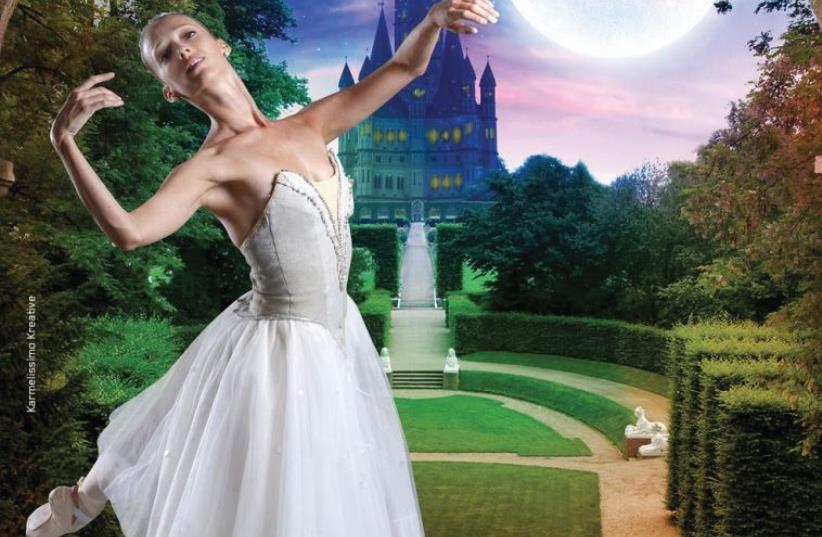 The Israel Ballet's Cinderella
(photo credit: PR)
Advertisement
1 FILMS THESE ARE MY RIGHTS
Freeheld unfolds the true story of New Jersey residents Laurel Hester and Stacie Andree that stirred up an entire nation during the ’90s. Hester, a police lieutenant, is diagnosed with terminal cancer. After the county rejects transferring her pension benefits to her domestic partner, Andree, they both set out for one last important battle.2 TELEVISION THE NEW MUPPET SHOW
After a 20-year hiatus from the small screen, The Muppets come back as the frontrunner comedy show of ABC Network. The mockumentary sitcom managed to draw 11 million viewers on its debut episode, exposing the dramatic breakup of Kermit and Miss Piggy. Jay Leno, Reese Witherspoon, Jennifer Lawrence and others, star as guests in this new hit show.

Thursdays at 9:30 p.m. broadcast on HOT PLUS and HOT VOD.3 DANCE FAME QUEST
Man of the Hour is a world premiere choreography work by Itzik Galili with eight Israeli dancers and two female opera singers. In his new work, Galili examines the human quest for momentary fame, the search for a piece of memory that will form a personal identity in the infinite journey from a cry to serenity – in what creates a shaking experience for the audience.Thursday at 8 p.m. at the Israeli Opera, Tel Aviv. For tickets, call: (03) 692-7777; www.israel-opera.co.il/en/.

4 DANCING IN THE MARKET
“From Jaffa to Agrippas” is a dance festival at the Mahaneh Yehuda market, initiated by the C.a.t.a.m.o.n Dance Group, directed by Elad Schechter with the Jerusalem Municipality.The event will display seven choreographies, created especially for the festival.Sophia Krantz will present her work Muse, along with Idan Hirshzon at the Shem-Tov bar and host talks with the audience.

Thursday from 7:30 to 11 p.m. at various locations in Mahaneh Yehuda, Jerusalem. For more details and full schedule, visit: http://fjta2015.catamon.com/; tomlevd@gmail.com.5 MUSIC FEMALE ARAB MUSIC
The Museum for Islamic Art, taking part in the Hamshushalayim events in Jerusalem, will present the Women Rhythm Festival with leading female vocalists in contemporary Arab music during December.This week will feature Mira Awad, with an acoustic performance of original numbers in Arabic and English in a special fusion between East and West.Thursday at 10 p.m. at the Museum for Islamic Art, Jerusalem. For tickets and more information, call: (02) 566-1291; www.islamicart.co.il.

6 SALUTING THE HARP
The Elma Arts Complex will pay homage to the International Harp Contest in Israel in memory of Michal Zmora Chon, pianist
and musicologist. The Carmel Quartet will perform along with the winner of the 19th International Harp Contest. The program will feature works by Marcel Tournier, Antonio Vivaldi, Andre Caplet, or Sergiu Natra, or Murray Shaffer.

Saturday at 11 a.m. at the Elma Arts Complex, Zichron Ya’acov. For tickets and more information, call: (04) 630-0111; www.elma-hotel.com.7 ART TINY HEROES
Sarona Park will host the traveling exhibition of British Guinness Record holder Willard Wigan, who creates micro-sculptures measured in fractions of an inch.All miniatures are placed in the eye of a needle or on a pin head, so they can be seen only with a microscope. The exhibition displays a microcosm of fairy-tale characters such as Cinderella, Little Red Riding Hood, Pinocchio and more.Friday from 10 a.m. to 2 p.m. and Saturday from 10 a.m. to 8 p.m. at Sarona Park, 12 Elazar St., Building 105, Tel Aviv. Exhibition will also be open during Hanukka, December 6-14 from 10 a.m. to 8 p.m. For more information, visit: www.miniart.co.il.8 CHILDREN DANCING WITH NO SHOE
The Israel Ballet will present a number of performances for Hanukka of the enchanted story of Cinderella, in an exciting new production for the entire family, by choreographer Ronald Savkovic. Savkovic is a popular worldwide choreographer, graduate of the Budapest Dance Academy and recently became the artistic director of the National Theater in Rijeka, Croatia.December 5-14 in Ariel, Tel Aviv, Haifa, Herzliya, Jerusalem and Petah Tikva. For exact dates, times and locations, call: (03) 604- 6610; www.eventim.co.il; *9096.9 MIXED BAG NIGHTS AT THE MUSEUM
As part of “Hamshushalayim at the Museum,” the Israel Museum will open its doors late into the night for visits to selected exhibitions, with guided tours every 30 minutes, including “Twilight Over Berlin”; the museum’s collection of hanukkiot; and special performances by Jane Bordeaux with Alon Eder in the exhibition gallery “We the People; Man Ray: Human Equations.”

10 BEAUTY ON ICE
During Hanukka, Israel will host for the first time the The Snow Queen, by the Moscow Circus on Ice featuring international ice-skating award winners, traditional circus artists, clowns and ballet dancers on ice. The fairytale was written by Hans Christian Andersen in 1845, and tells the story of the eternal battle between good and evil.December 4-23 in Ashkelon, Ashdod, Modi’in, Herzliya, Karmiel, Haifa, Kfar Saba, Ma’alot, Tel Aviv, Netanya, Jerusalem, Beersheba, Rehovot, Rishon Lezion and Ariel.For specific dates and locations, visit: www.easyticket.co.il.