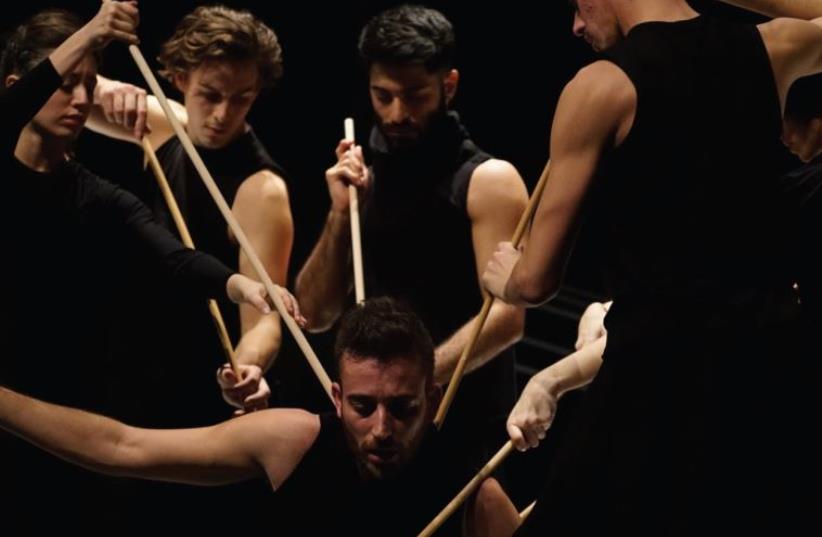 Vertigo Dance Company
(photo credit: GADI DAGON)
Advertisement
Noa Wertheim talks a lot about the elements.“You are very air here, and I need you to be more earth” is a correction she has been known to give to her dancers. When she speaks about fire, she isn’t only recognizing the positive elements but the potential danger it possesses.“The same material can be soft and smooth and also strong and destructive,” says Wertheim over the phone. It is a Sunday morning, and Wertheim’s dancers are just finishing their warm-up, preparing for another intense day. The past few months have been busy for the members of Vertigo Dance Company. With a new creation on the presses and multiple existing works being performed in Israel and abroad, they haven’t had much time to catch their breath.The new work, which will premiere next week, is a study of the many faces of water.“I started research on Yama a long time ago. I started to look at movements that are at the extremes of the water spectrum. If water has no boundary, it will flow and flow. It keeps moving. On the other hand, if water is closed in on, it will explode in such a powerful way that it can create a tsunami,” she explains. “At the end of the day, there are very few things in the world that we don’t have any control over, and water is one of them.”The process, which began last year, saw a significant turnover in the Vertigo cast. Whereas Wertheim had grown accustomed to creating alongside dancers who had been with her for several years, predominantly new artists will perform Yama.“There was a very challenging phase when I tried to explore the movement material on a group of my veteran dancers. Then, in September, I had a big turnover of dancers. We had a big tour. And then I had to pass the material on to these new dancers. I’m used to working with dancers for five to eight years. Suddenly I had a change, and the oldest company member had been here for three years,” she says. discovery of the material at hand occurred together with the discovery of her cast.“During the research, a lot of things are revealed. It’s very interesting. I am meeting the material and also the people at the same time. Like water, when you put a person in a corner, they can become a monster,” she says.Another revelation that awaited Wertheim in the Yama journey came from her team of collaborators.Ran Bagno, who has worked with the company for more than 20 years, returned to write an original score for Yama.“It’s amazing to work with someone for so long and see that they can still surprise you,” she marvels.For costumes, Wertheim turned to fashion designer Sasson Kedem, whose black garb adds drama and volume to the movement.The set designer, Swiss visual artist Nathalie Rodach, was the only newcomer to the team.“Nathalie is doing theater for the first time in her life. Several months ago she came to do a residency at our ecological village in Kibbutz Netiv Halamed Hay. We got very close and had such great chemistry that we decided to work together on Yama. She went to the theater and measured, studied, learned the field. She did something very interesting that I really love,” she says.All the visual elements in Yama are black, a fact that creates a “local, Arabic, Middle Eastern” look to the work.“There is a sense that something is being restrained on stage, that it is about to explode,” she says.The first shows, which will take place at the Suzanne Dellal Center and the Jerusalem Theater, will be followed by a month-long Israeli tour.

‘Yama’ will be performed at the Suzanne Dellal Center on February 4 and 5 (www.suzannedellal.org.il) and at the Jerusalem Theater on February 9 (www.jerusalem-theater.co.il). For more information on Vertigo Dance Company, visit www.vertigo.org.il.
Advertisement
Subscribe for our daily newsletter