The ‘Desert Magic’ festival is in its second year and hopes to bring thousands of tourists to visit Beduin communities in the Negev. 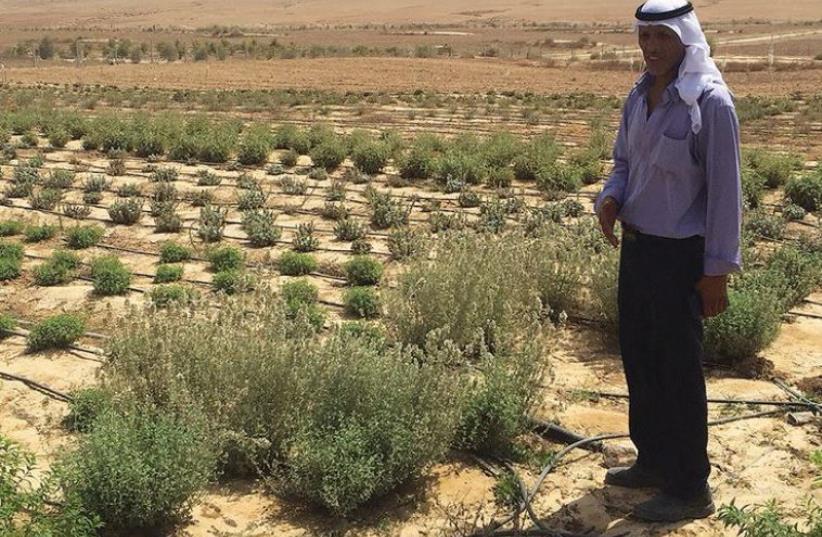 Ali Al-Hawashla poses next to a field of herbs at Wadi Attir (left), a 40-hectare project to preserve traditional organic Negev agriculture, which includes the collecting of local seed varieties
(photo credit: SETH J. FRANTZMAN)
Advertisement
Abu Yusuf al-Sana doesn’t seem fazed by his 72 years. Stocky and strong, he carries himself with a quiet confidence as he looks at the bounty he has created with his own hands. Spread out on the side of a hill at the edge of the Beduin town of Lakiya is his handiwork: a traditional-looking warren of stone buildings. “Tzimmerim Lakiya” is his work in progress, a network of courtyards and shared rooms that can be rented for a holiday. From afar the place could be mistaken for a traditional makam, or sacred tomb, with its domed roofs and large tree in the courtyard, so typical of the ancient tombs like Nebi Musa near the Dead Sea, that once stood out in this desert landscape in Ottoman times.But this is 2015, and Abu Yusuf has done something more original. Scrounging local stones, some of which probably adorned structures in antiquity, he has built a distinctive offering in dusty and generally poor Lakiya, which is home to 12,000 Beduin in the Negev.Over the years Israel has seen many initiatives and false starts to bringing tourism to its diverse communities that tend to live on the margins of society. The Beduin are a perfect example of this. The 200,000-strong community is one of Israel’s fastest growing, and also one of its poorest. In the 1970s and 1980s the country built several planned towns, such as Lakiya, for Beduin residents, but many Beduin still live in unrecognized villages, or in parts of these towns that are not recognized. They suffer from lack of infrastructure and basic investment.Local seed varietiesThe Beduin have a rich history to offer. The “Desert Magic” festival this year will take place October 3 to 5 and feature eight venues in Lakiya and nearby Wadi Attir. The concept is to draw tourists to the Beduin community and allow the local people to lift the veil on their products and traditions. There won’t be any hokey camel rides here, no contrived belly-dancing or other faux “cultural” traditions. Here is a chance to get one’s hands on the authentic culture, according to the locals involved.Asad al-Asad, the young and spry proprietor of a local plant and medicinal herb shop, takes us to a long tent in the back of his property. Past the steaming greenhouse, contrasting with the cool air of the plant nursery, the tent beckons with warm coffee and is decorated with traditional tools. A wooden pitchfork is used for threshing and sorting wheat from chaff. There is a bloated sheepskin sack that used to be employed to carry water; another is used to make labaneh. Two round stones are used to grind down the wheat.Asad grew up in an unrecognized village named Shaib al-Masadieh, north of Lakiya, in the northern Negev. Its 300 millimeters of annual rainfall makes it an area that is particularly fertile. To the south and west, the rainfall decreases and the soil becomes hardscrabble – an uninhabitable desert. 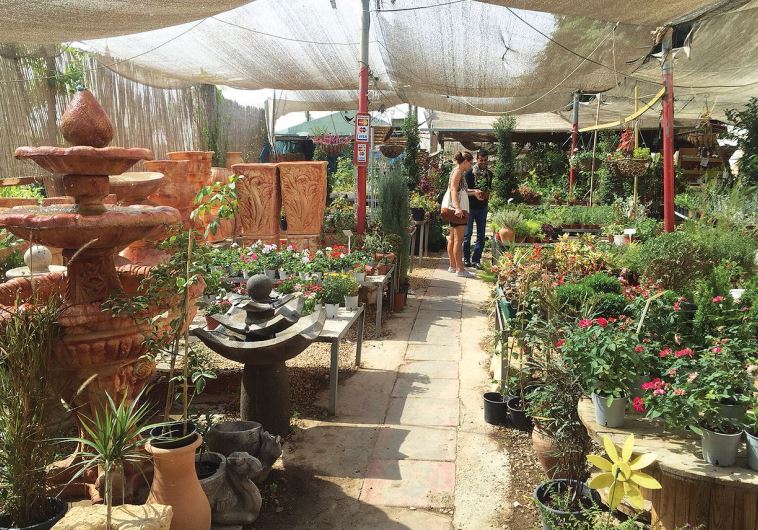