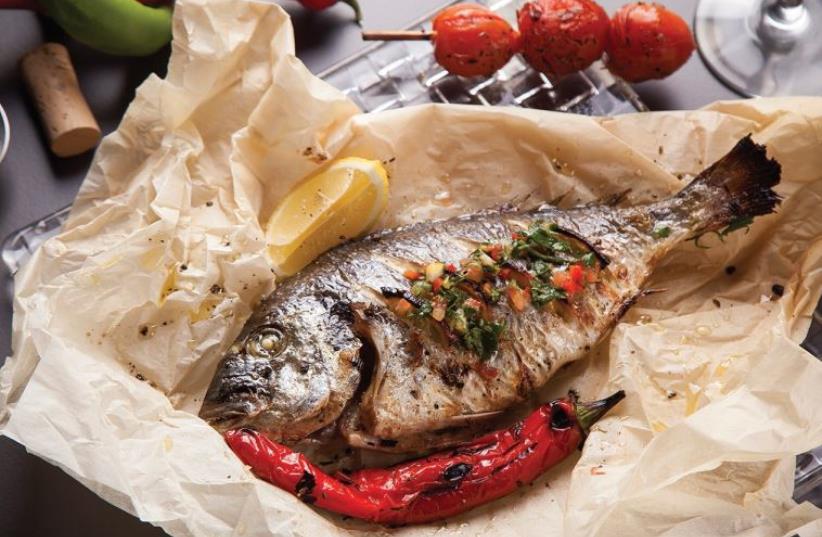 Dominique Kitchen Bar
(photo credit: PR)
Advertisement
For the young executives working in the Ramat Gan Bourse, Dominique Kitchen Bar has long been the place to go for a quick inexpensive lunch between deals.It is open in the evenings for dinner, and I recently visited with my dining companion to find out what trendy young Israelis are eating nowadays.We were greeted by manageress Mika Salman and young chef Guy Tsarfati, both of whom emphasized how good it was to be working in a kosher restaurant and having Shabbat off to be with family. Well, some of us have known that for years.The place is very clean and streamlined, rather hi-tech as befits its location, and colorful with red leather chairs, candles on the tables and a friendly informal atmosphere.We asked Salman to bring us anything the chef especially wanted to showcase, as there is nothing we don’t eat.First to arrive was a collection of dips and a basket of bread – but not just any old bread. There were ciabatta, toasted crispy whole wheat bread and a chunk of whole wheat bread studded with raisins, pine nuts, sesame seeds and watermelon seeds, which I could have eaten all evening. It was made, we were told, at the sister Dominique round the corner, which is a dairy restaurant and has a bakery attached.The dips were also excellent – homemade tehina, tomato salsa with a za’atar kick and standard olive and balsamic.Several starters arrived in quick succession: fried cauliflower, a very rich and creamy pate de foie with glace plums, a refreshing ceviche of fresh tuna and avocado dressed with coriander, diced salad and lemon, and a meatball on a skewer served with a beautiful pink sauce, which we discovered was made with tehina and roasted red peppers.Although the napkins were paper not linen, the waitress replaced them at regular intervals which, in the end, probably turned out to be more hygienic, anyway.The first main course to reach the table was the vegetarian option – gnocchi with fresh mushrooms, peas and carrot sticks (NIS 52). I’m not a huge fan of gnocchi, but this dish was definitely worth tasting.Another veggie offering was potato carpaccio made from very thinly sliced potatoes (NIS 24). They stuck to the plate, and it was not an easy dish to sample – but full marks for creativity.My companion chose the steak entrecote – at NIS 120, the most expensive dish on the menu – and pronounced it very satisfactory: tender, juicy, crispy yet rare. The potatoes that accompanied the meat were a revelation. Listed as “broken potatoes,” they had been baked, cut in half, crushed by hand and deep fried.They were quite as good as one can imagine they would be after going through such a process. The other main dish, pargiot with polenta, was very tasty and tender and felt healthy, with no fat to speak of (NIS 56).We drank draught beer, but there is plenty of wine available at NIS 29 to NIS 35 a glass, as well as a large choice of bottled wine.For dessert I chose crème caramel, without much hope that it would be anything like the real creambased thing, and I was pleasantly surprised. Made from coconut cream, it had the classic burnt caramel topping and was very acceptable. My chocolate-mad companion had a selection of chocolate-based goodies, which included a creamy mousse, petits fours and Florentines. He seemed very content with the choice.After the meal, we chatted with chef Tsarfati, who had returned from several years in New York. He told us that although his early influences had been his Turkish family background, especially his Turkish grandmother, he now sees his work as being a fusion of Mediterranean, Eretz Yisraeli and modern gastronomic concepts.Whatever the reasons, the chef certainly knows how to turn out a satisfying and creative meal. And the prices are very reasonable. We figured the same meal at a posh Tel Aviv eatery would be three times the price.