Molly Bloom’s Sarona had added a vegan section to its menu. 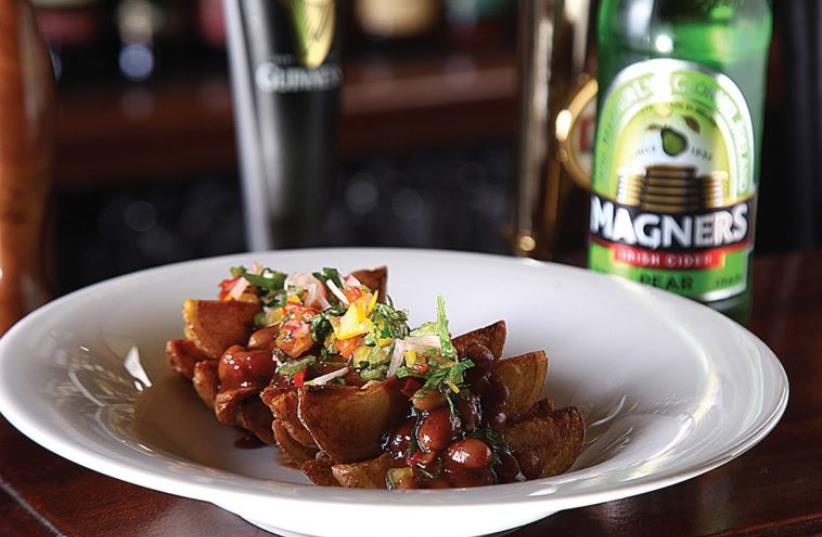 Molly Bloom’s restaurant
(photo credit: PR)
Advertisement
It’s safe to say that when Molly Bloom’s opened its first watering hole in Tel Aviv around 15 years ago, the pub culture in this part of the world took an incremental step in the right direction. Tel Avivians of a certain vintage may recall The Prince of Wales bar near the municipality, which was run by a British couple, and even had a darts board. That closed down around 35 years ago, and Israelis – especially of British extraction – looking for an authentic pub ambience had to wait some time before the Hayarkon Street green-fronted bar hove tastefully into view. With its faux oak-paneled interior and stained glass window elements, one could almost imagine oneself in a cozy local on the Emerald Isle or even the Sceptered Isle across the Irish Sea. The Guinness has flowed merrily ever since, and one can actually get chips (French fries for those who come from the western side of the Pond) and vinegar at the Irish taverns here. It was solid sustenance rather than alcohol that was on my mind when I recently visited the latest addition to the Molly Bloom’s chain, the Sarona outlet, which opened a year ago in a charming spot.As I sat outside the pub under a sun shade, the sound of trickling water wafting gently across from the nearby lily pond induced at least a sense of cooler climes while I awaited the arrival of my first dish culled from the recently introduced vegan section of the Sarona pub menu.The visit did not start out on the right foot when the vegetarian waitress informed me that Guinness is not vegan-friendly. A later Google search revealed that something called isinglass, which is made from the swim bladders of fish, is used in the production process of the black stuff. Although apparently there is no trace of “offending” substance left in the stout when it gets to its point of dispense, that makes Guinness off limits for vegans.And so to the food, which I eventually opted to wash down with a pint of Tuborg Red. I started off with the Belfast potato – a dish of slices of the eponymous vegetable, with smoked chipotle beans, topped with chimichurri sauce. The beans could have done with being cooked for slightly longer, but the fusion of textures and flavors evoked a slightly tangy effect that duly titillated the palate.Although I am not a big fan of vegan food that is designed to remind one of the original creations – hence I eschewed the vegan hamburger and French fries – I went for the shepherd’s pie. It certainly looked like the real thing, which is said to hail from northern England, but it turned out to be a letdown. The potato topping was not crusted, and the slightly spicy affair was an off-kilter damp squib of disparate textures and flavors.Having preceded my foray to Sarona with a long bike ride, I was happy to imbibe some more calories, and the tofu sandwich turned out to be a good choice. The whole-grain slices embraced a good blend of flavors and inviting textures, with the well-prepared tofu, lettuce, tomatoes, sweet potato and mayonnaise-liked sauce, with the deft addition of pickles, doing the job.I even managed to squeeze in a bit of the chocolate cream and coconut dessert. It is the kind of meal closer that makes you feel almost over-pampered, with a seductive combination of creamy chocolate, neatly augmented by desiccated coconut, with wild berries and zigzagged applied red sauce completing the gastronomic and esthetic delight. Naturally, the Sarona branch of Molly Bloom’s has a very well- stocked bar, which includes a generous selection of Irish and Scotch whisky and some amber nectar from the States.The writer was a guest of the restaurant.Molly Bloom’s Sarona 6 Mendler Street Sarona, Tel Aviv Tel:055-886-018 Not kosher