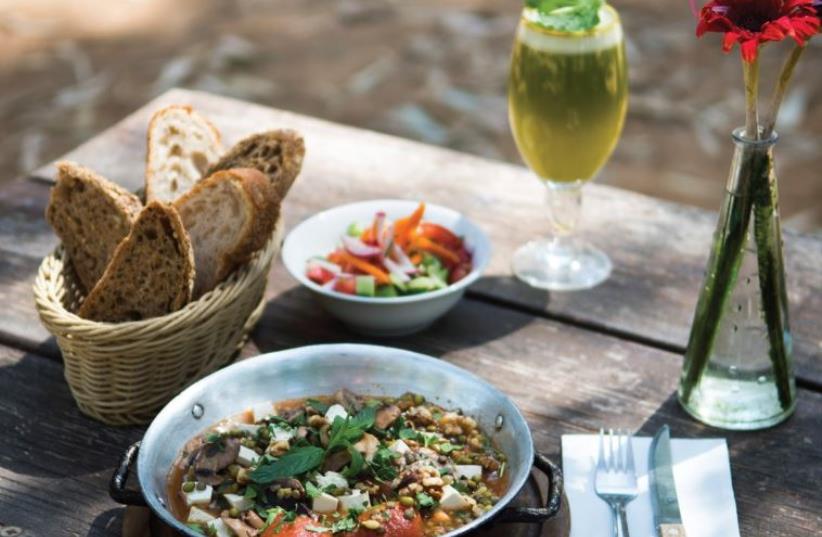 Tapuz Bateva
(photo credit: PR)
Advertisement
Summertime is al fresco season – preferably in nature and in the shade. That, along with good food, has been Tapuz Bateva’s winning formula, from its origins among the orange orchards of Moshav Batzra to its present location among the stately eucalyptus trees of Herzliya Park, where it is now celebrating its fourth year with the launching of a new summertime menu.The updated menu already exists in Hebrew, and we were told that the English one will be ready soon. In a major overhaul, the restaurant has scratched all its pasta dishes, while adding new vegan options. There is no meat on the menu, just one fish dish (salmon) and several chicken offerings. There are two breakfast categories: one is served until 1 p.m., and the other is served all day.The first choice we faced was which of the tempting fresh juice combinations to order (NIS 20). We settled on the purple (beet, apple and celery) and the red (red grapefruit, ginger and mint). The former had more body, while the latter had an extra bit of zing. Both were delicious.The house bread (NIS 36) was a hearty, chewy, multi-grain sourdough, with a variety of seeds coating the crust and studded throughout the loaf. It came with assorted dips: baba ghanoush, tuna salad, tehina and a cream cheese spread flavored with roasted red peppers. There was also Bulgarian white cheese and soft butter wrapped like a toffee.We were intrigued by the cheesy falafel (NIS 36): herbed balls of quattro formaggi – the classic blend of four Italian cheeses: mozzarella pecorino, ricotta parmigiano – served with a celery-scallion aioli dressing.Once bitten into, the crispy “falafel” balls oozed melted cheese that filled the mouth with rich flavor.The salads (NIS 52) at Tapuz Bateva are very large, plenty for two to share. The Lebanese salad consisted of finely chopped tomatoes, cucumbers, red onion, kohlrabi, mint and parsley, lightly dressed with an olive oil and lemon juice vinaigrette.But the ingredient with the most influence on the taste was feta cheese, so fans of the salty white cheese take note.The salad of root vegetables contained julienned beets, carrots, kohlrabi and radish, along with leaves of baby greens, seasonal fruit (black grapes and nectarine, in our case) and assorted nuts and seeds. The fruit was barely noticeable, and the presence of dressing even less so, but there was enough going on in the salad to satisfy.There were two noteworthy vegetarian patties (NIS 62), not least because they were airy, not dense, and especially because they tasted as good as fried, even though they were baked. The spinach patties were a pleasant mix of sun-dried tomatoes, pecorino and Parmesan cheeses and round grains of fluffy white rice. The patties, comprising primarily orange vegetables – sweet potato and carrot – with grains, were seasoned with just the right touch of curry. Both kinds of patties were accompanied by creamy, tangy sheep’s yogurt.Desserts (NIS 38) at Tapuz Bateva were not as healthful as the rest of menu; in fact, they were downright decadent, particularly the chocolate soufflé, whose crater was filled with warm, lava-like dark chocolate, which doubles as hot fudge sauce for the generous scoop of cookies-andcream ice cream.The cheesecake, topped with a thin layer of white chocolate mousse, was light and sweet, with a texture almost like sponge cake, on a crust that did the confection justice.The desserts went nicely with a frothy coffee granita (NIS 19), which looked and tasted like a coffee milkshake.Whether for a meal or just dessert and coffee, Tapuz Bateva is a welcoming place on a warm day or evening. With an adjacent wellequipped playground and plenty of room to run around, it is certainly recommended for families with children.

The writer was a guest of the restaurant.Tapuz Bateva
Not kosher
Herzliya Park B, Jabotinsky Street, Herzliya
TelL (09) 974-4050
Advertisement
Subscribe for our daily newsletter