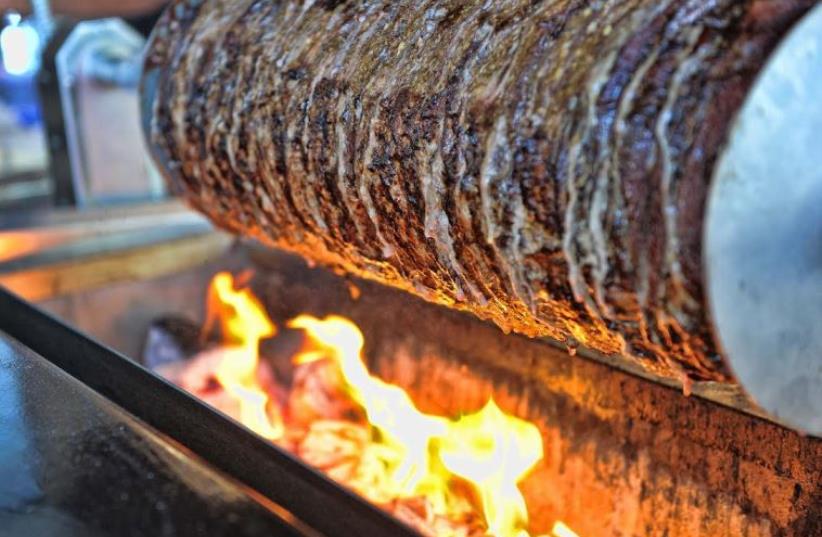 Shawarma roasting over coals at Bandura in Bnei Brak
(photo credit: ELAD GUTMAN)
Advertisement
When I was told that I would be going to eat shwarma in Bnei Brak, I definitely was a bit confused. What could be so special about shwarma?However, Bandura is shwarma with a twist; Shwarma shop 2.0. The place has a vibe closer to that of Chipotle (the hip yet fast tex-mex chain that Americans know well) than the grimey place on the corner hawking this mainstay middle eastern street food.Bandura, which is Arabic for tomato, is located at the beginning of a lovely pedestrian walkway, surrounded by sushi restaurants, cafes and busy business people looking to grab a quick bite. 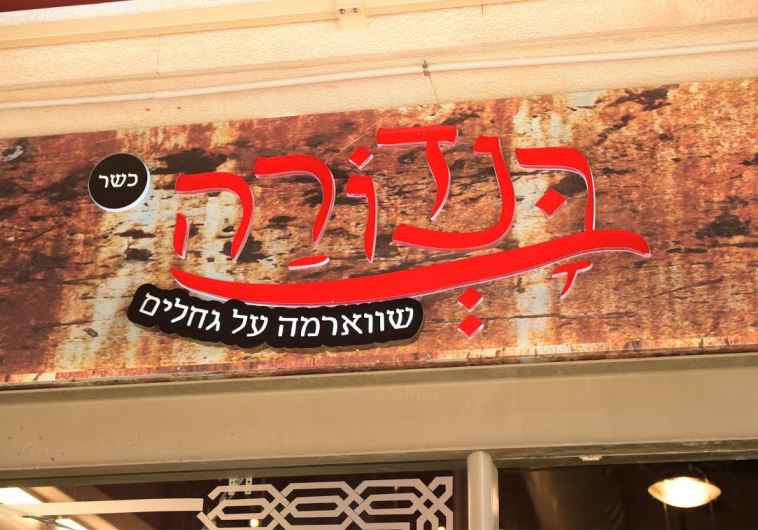 Owner Chaim Halfon said the idea for the restaurant, which was started in Kiryat Ata, came from his desire to shake things up a bit, while maintaining the traditional flavors he knew and loved."I wanted to take hummus and add something new,” he said. "Shwarma is one of the most loved foods for Israelis. It's part of their DNA. But it is very traditional and has hardly had any updates. We saw a chance to bring something brand new."One thing that stands out is Bandura's unique horizontal shwarma roaster that roasts the meat over coal fire. Chef Rubi Cordobi explained the reasoning behind this: it allows more of the meat's juices to stay inside the meat instead of falling to the bottom.The difference in taste was noticeable. I usually find shwarma to be overly salted but Bandura's offering had a great balance that allowed the flavors to come out without turning my body into a glorified salt mine.The first course started off with beef-filled Kubeh (NIS 10). This fried dumpling was generously seasoned with cumin, giving it a yellow tint like a ripe banana. It was crispy on the outside and soft on the inside.The next offering, which was my personal favorite, was the Bandura Roll (NIS 19). The sweet and savory dish consisted of soft, thin layers of lafa bread rolled up with perfectly-spiced veal shwarma. Even as other dishes were brought out, I could not stop munching on this one! The menu was right when it described it as something “to calm down your hungry state,” because the Bandura Roll certainly could have sufficed as a meal in itself. 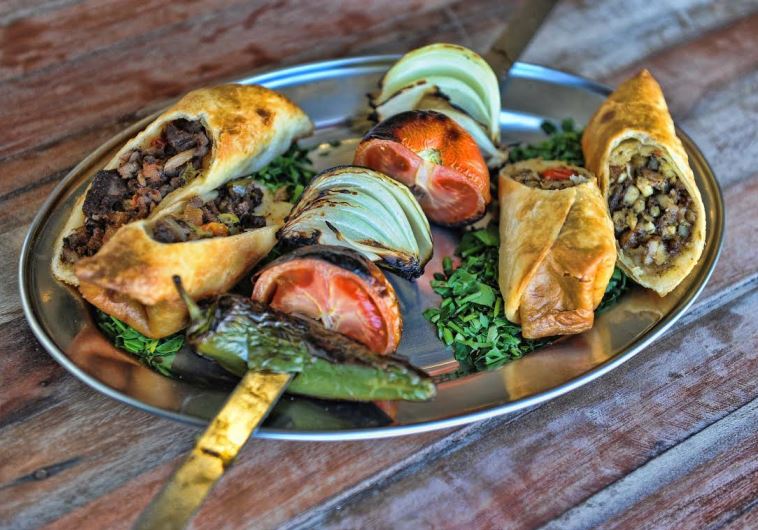 The Bandura Roll, the author's personal favorite.
(photo credit: Elad Gutman)Next was Hummus Bandura (NIS 39), the creamy chickpea dip which could also have been a full meal, given its well-portioned serving of veal shwarma, fresh onions and parsley served with piping-hot, freshly-baked pita for dipping. 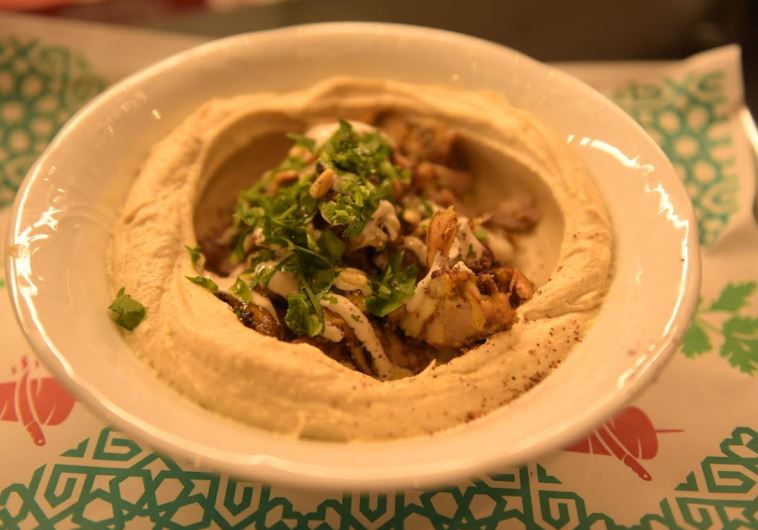 Hummus Bandura.
(photo credit: Elad Gutman)The meal ended with a sampling of the veal shwarma served in a pita (NIS 33). I topped my mine with Bandura's spicy tehina, cucumber-tomato salad and their special Amba Ta'aha sauce, their take on the beloved pickled mango sauce.The meal came with a variety of small salads, such as pickled cabbage, vegetables and eggplant, the de rigeur for any truly Mediterranean restaurant.I must say that I was impressed that the main dishes and appetizers were served on real plates and not the usual styrofoam or plastic (the salads still were in disposable bowls but served on a trendy metal platter.While there are a few seating options indoors, on the outside  there are more tables and a couple of picnic benches, enough accommodate 26 people. I ate at Bandura at the restaurant's busiest time the lunchtime rush, between noon and 1 o'clock p.m. People were standing in line and there was not an empty seat to be found.Bandura is definitely a great way to show off the traditional Israeli cuisine while still having a comfortable meal.Their Bnei Brak location is the latest of four in the chain, which are all kosher. Currently, six more branches are in the works, so there may be a Bandura near you very soon. The writer was a guest of the restaurant.Bandura
Kosher
13 Ben Gurion, Bnei Brak
03-560-7777