The Tel Aviv Hilton heats up winter with a hearty array. 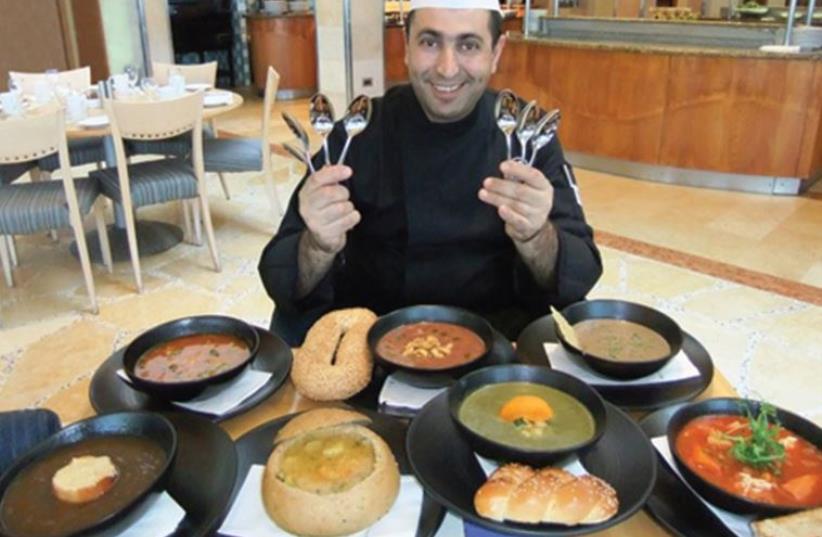 The Tel Aviv Hilton's restaurant
(photo credit: PR)
Advertisement
The winter months (between Hanukka and Purim) constitute low season in the tourism trade. When the occupancy rates of hotels drop, the more enterprising of them – like the Tel Aviv Hilton – will come up with creative ways to attract other customers.“Each winter, we run promotions designed to bring locals to our restaurants,” says Motti Verses,” director of public relations for the Hilton chain in Israel. “Last year, it was pastries and desserts, prepared by visiting chefs from Austria and Hungary; this year, it is a festival of soups, created by our new executive chef, Rafik Jabarin.”Jabarin, who was promoted from within the Hilton ranks and commutes daily from his home in Umm-el-Fahm in the Galilee, has drawn on the Arab cuisine of his roots in coming up with some of the recipes for the seven soups featured at the hotel this winter.All soups are priced at NIS 47, with the exception of the minestrone and the onion soup, which are NIS 42.“Each soup comes with its own bread pairing,” explains Jabarin, “although focaccia, served with dips of olive oil and tapenade, can be ordered separately.”As I waited for my first bowl of soup, I tried one of the Hilton’s eight specialty cocktails. They are also the subject of a current promotion: 25% off between noon and 6 p.m. The Green Hornet (NIS 67 before the discount) – lemon vodka, Amaretto, melon schnapps, sour mix, Southern Comfort and Sprite, with a garnish of a skewer of fresh fruit – was refreshing and sweet but not cloyingly so.The Turkish Sultan, evocative of this nation’s Ottoman past, was the most intriguing sounding of the festival’s soups. A thick orange lentil and vegetable soup, it comes in a bowl carved out of multi-grain rye bread. It was great and rewarding fun scraping the bottom and sides of the bowl to eat the bread that had absorbed the delicious soup.While the soup component of the Sultan comprises only vegan ingredients, the dish could not be labeled vegan because the bread contains eggs. The Vegan Goulash, however, does meet the strict vegan requirements. The menu highlights the spaetzle dumplings in the soup, but it is actually chunks of tofu that are the dominant ingredient. The goulash comes with a light and airy slice of garlic bread.The Winter Soup is primarily a bean soup: white and red beans, some of which are crispy, for a welcome change of texture. While the menu mentions wasabi, I could detect no trace of the Japanese condiment. On the other hand, there is the faintest hint of the chive-infused olive oil. Tasting like a vegetarian cholent, this selection comes with a Jerusalem bagel – a smaller version of the distinctive oval-shaped, sesame-encrusted treat.The Swiss Chard soup is paired with another unexpected bread partner – a mini-loaf of braided halla. Fans of spinach should enjoy this pungent, dark green broth, bulked up with chickpeas and topped with a dollop of a delicate carrot cream. Personally, I could have eaten a whole bowl of just the carrot cream.The Mushroom Cappuccino turned out to be my favorite: a rich, velvety soup, redolent with fleshy shards of fresh mushroom, on which float three islands of frothy sweet cream. A thick, crunchy Parmesan cracker serves as the perfect foil for this dish.The soup theme even carries over into the desserts, which include a chocolate soup.Unfortunately, it was already sold out by the time I ordered, so I opted for what chef Jabarin says is the restaurant’s most popular dessert: the chocolate soufflé (NIS 57). It is easy to see why the warm chocolate lava spooned over a generous scoop of Ben & Jerry’s vanilla ice cream has remained a top choice of patrons over the years.There is a whole showcase of tempting desserts that is a feast for the eyes, such as multiple choices of cheesecakes, chocolate pastries and one or two sugar-free and gluten-free options. The lemon pie, a European-style round tart, offers a nice balance of flaky crust, tart lemon and sweet, fluffy meringue.A good deal to keep in mind is the business lunch: three courses for NIS 95, including two hours of free parking. It’s like paying for one of these extraordinary soups and one scrumptious dessert and getting a main course for free! The writer was a guest of the restaurant.