Dining: The most important meal of the day 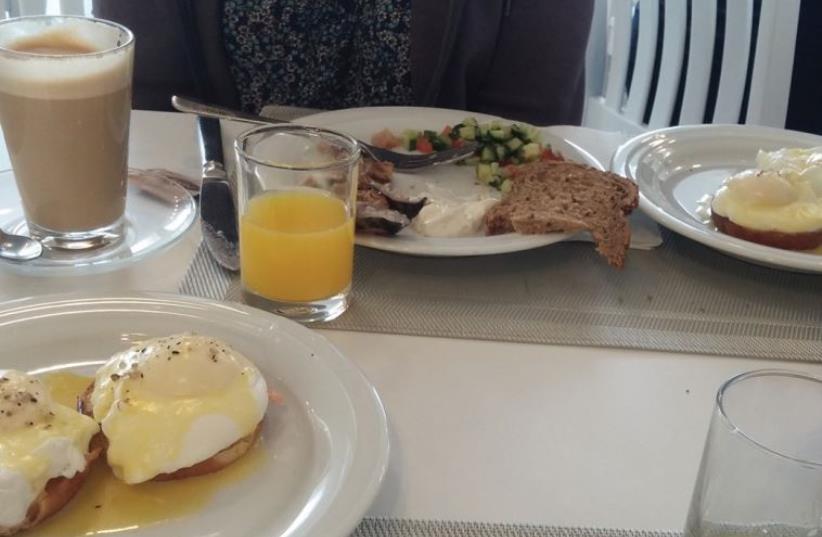 Le Petit Dejeuner Eilat
(photo credit: PR)
Advertisement
As desirable as Eilat is to spend vacation time, there’s a noticeable time lapse in the development of its culinary culture compared to larger Israeli metropolises like Tel Aviv or Jerusalem.Like a throwback to bygone days when tourism wasn’t as focused as it has become, soggy pizza, mealy burgers and runny eggs are still the norm for the cost-conscious travelers who aren’t dining at the increasingly upscale hotel restaurants.Maybe that’s why the expansive hotel breakfast buffet was invented in Eilat (according to urban legend, at the King Solomon Hotel). The wide selection and ample quantity enable guests to bulk up in advance of their action-packed day and help quell the anxiety-filled question “Where are we going to eat tonight?” But even at the sumptuous breakfast buffets, the noise and tumult – combined with the swarms of plate-holding diners crowding the hapless omelet maker – create a less than relaxing atmosphere or fulfilling culinary experience. That’s where Le Petit Dejeuner steps in with some big city style.Housed in the new Soleil Boutique Hotel (formerly the Dalia), conveniently situated between the airport and the promenade, the open-for-breakfast establishment caters to hotel guests, as well as the general public. Like the hotel, the restaurant exudes a personal touch, with the friendly staff behaving like they’re inviting visitors into their home.In addition to the usual spreads of salads and vegetables, smoked fish and piquant cheeses and fresh-baked good, both sweet and savory, the kosher restaurant’s secret weapon is its entrée menu.Instead of standing in line for your eggs or pancakes, diners are presented with an extensive menu with numerous options, each one better than the other. In addition to the standard omelets, scrambled and over-easy options, there’s a whole list of poached eggs, including the Florentine – two eggs served on a brioche with sautéed spinach and Hollandaise sauce – or the Poached Eggs Royale, substituting smoked salmon for the spinach. It rivaled the eggs Benedict I sampled at the Waldorf Astoria in Jerusalem.The shakshouka was perfectly serviceable and was presented in its own skillet. It also came in variations such as the green shakshouka with Swiss chard, spinach and tomatoes and the Balkan shakshouka with spicy tomatoes, peppers and grilled eggplant.If that’s not enough, special entrees include Yemenite calzone, Spanish frittata and sweet dishes like Belgian waffles, French toast and pancakes. And the best thing? Each dish is brought to your table piping hot.Well, maybe not the best thing.That has to be the made-to order coffee prepared by the hard-working barista. He makes some of the best cappuccino you’ll ever have, and it’s also brought to the table.At NIS 65 for Eilat residents or NIS 85 for out of towners (guests at the hotel naturally have their breakfast included as part of their room cost), the breakfast buffet is not to be missed.With Le Petit Dejeuner’s foray into fine dining, the cultural time warp between Eilat and the rest of the country has suddenly been greatly diminished.