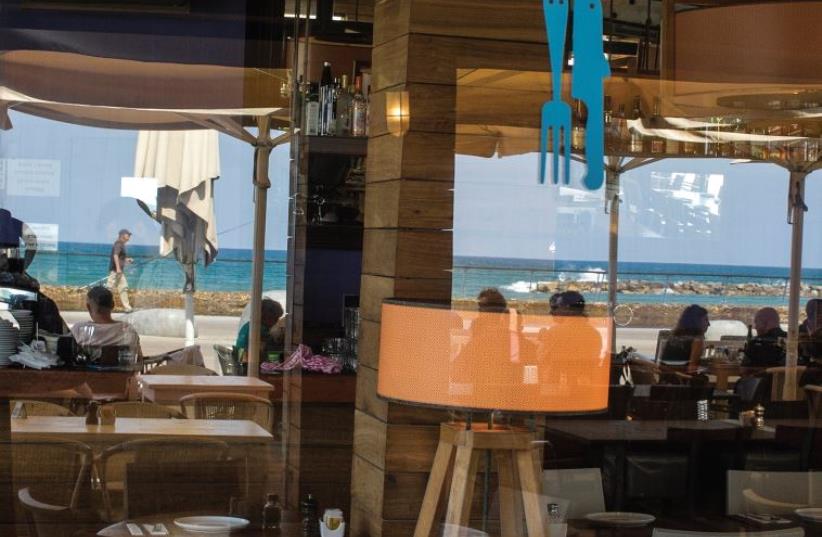 Yulia restaurant
(photo credit: PR)
Advertisement
Nestled in the Tel Aviv Port, Yulia not only offers delicious food, but it has a wonderful boardwalk atmosphere and is the perfect place to kick back and enjoy a sunset. The very welcoming outdoor seating area offers comfortable furniture and a scenic view of the Mediterranean Sea.Both Hebrew and English menus are available, and the day’s specials are detailed by attentive waiters. We perused the menu, which is minimal and interesting, offering an array of salads, pastas, fish and meat dishes.After nibbling on some fresh crisp focaccia (NIS 17) served with hummus, eggplant salad and roasted pepper tahini, it was time to order our appetizers. We started our meal with the cauliflower with tahini and date syrup (NIS 38). I don’t always love cauliflower but this was crisp, flavorful and cooked just right. Definitely a must have! This was followed by a Caprese salad (one of the specials of the day), which was not only attractive but also made from the freshest vegetables and very tasty.It’s amazing that so much flavor can come from such simple ingredients.Next up, we tried the fish kebabs served on black lentils, eggplants and raw tahini (NIS 63). The kebabs were nicely spiced and moist. This dish was flavorful, well cooked and perfectly seasoned.With a large stock of wine, Yulia’s choice is vast, so we left it to our attentive and knowledgeable waiter to recommend a lovely Israeli Cabernet Sauvignon that was equally comfortable with both the fish and the meat.After we took a bit of a breather, a series of main dishes were served. We had decided to try two dishes from the specials menu. First up was the grilled corvina fillet served with ravioli ricotta, and green beans in a light lemon-butter sauce. The fish was seared perfectly, holding its natural moisture, lightly seasoned and had a nice buttery, flaky consistency. The dish was accompanied by a lemon-butter sauce that complemented the fish well, and the ravioli and green beans added a heartiness to the otherwise light dish.This was followed by a 220 gr. sirloin steak served with chimichurri sauce on a bed of spinach. The meat was very tender and well prepared, but without the chimichuri sauce it lacked flavor (sirloin isn’t the tastiest cut, but even some salt/ pepper on top would have done well). Overall, it was a good dish but nothing special.After yet another breather, we were presented with dessert. First up was the phyllo fingers stuffed with halva (NIS 39). It was delicious. The phyllo was very light and flaky. This was followed by the hot chocolate soufflé (NIS 44). I wish I could have eaten more of it, but I was so full from everything else that I was going to start popping buttons if I continued. It came with vanilla ice cream in a small bowl next to the soufflé dish, and that helped cool the chocolate lava in my mouth and add to the richness and flavor. Make sure you order the soufflé ahead of time, as it takes a while to prepare.I would highly recommend Yulia to anyone who wants an elegant meal in a beautiful setting, with great food that is not too expensive.