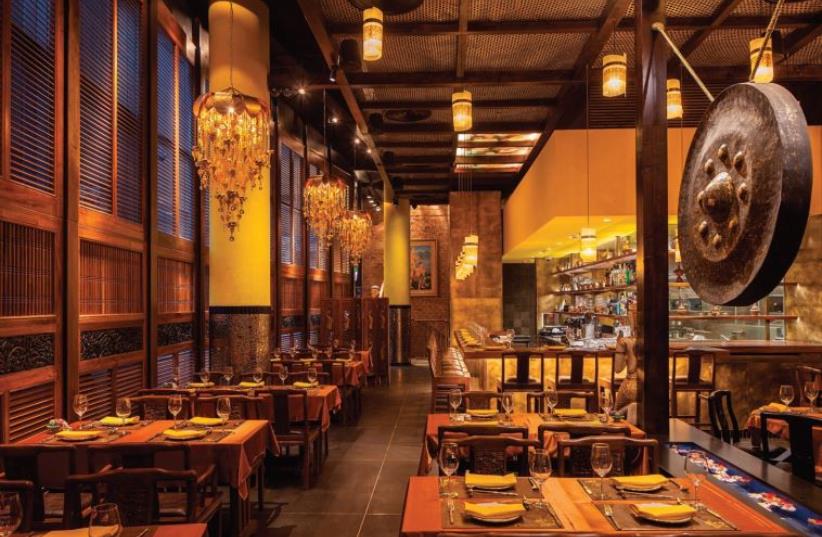 Nithan Thai restaurant
(photo credit: PR)
Advertisement
Since its inception a few months ago, Nithan Thai (which means “Thai legend”) has caused quite a buzz for being one of the most expensive restaurants to open in Tel Aviv. It was conceived by Naomi Hurvitz (nee Nam Pitkersaseri) who moved from Thailand to Israel 20 years ago “for love,” in her words, and simply ended up staying. Hurwitz, who grew up in a small village in northern Thailand near the border with Laos, says she’s happy to be able to share her love for Thai customs and cuisine with Israelis. Hurwitz spent some time exploring restaurants in Thailand and other parts of the world to gain inspiration for Nithan Thai.She ultimately wanted to create a place in Israel that serves royal Thai food.Upon entering, we were greeted with a warm welcome in Thai by three staff members and the hostess, all dressed in traditional Thai costumes. Walking into the main dining area, you can instantly sense the lovely aroma of Thai spices in the air, as the open kitchen showcases the chefs hard at work.Surrounded by enormous paintings and striking flower arrangements, and with a gigantic gong hanging in the center of the restaurant, the decor is interesting enough to keep your senses attuned but not crazy enough to create a distraction. It feels balanced - even down to the gorgeous restrooms.Attention to details is the keyword here.But as I’ve often said, you can’t eat atmosphere. What you can eat, at Nithan Thai at least, is truly delicious, well-seasoned, creative (and traditional) Thai cookery, served with a big smile, much efficiency and just the right amount of attention to your table.Upon ordering some exotic Thai cocktails, we were pleasantly surprised when a handful of waitresses came round to our table to carry out a traditional handwashing ceremony and blessing for success, love and health. This is a lovely touch before starting one’s meal.We began our culinary journey with the pla pla (NIS 66) – raw yellowtail, fresh pineapple, lemon vinaigrette, chili pepper, palm sugar and mint. The mix of citrus and sweet was impeccable and the texture of the yellowtail was soft and smooth.This was followed by nam tok (NIS 68), consisting of thinly sliced sirloin pieces tossed in chili, lemon grass, shallots, kaffir lime and mint. “Nam tok” literally translates into waterfall, which some say refers to the sound of the meat’s juices dropping into the fire. The sirloin had a tender, melt-inthe- mouth texture. If you’re really into bold flavors and like something with a kick to it, I would give this a try.Next up was the charcoaled chicken satay skewers (NIS 56). I would say that this was the most disappointing dish of the evening. I thought they were average at best and that is being generous. The chicken had a very rubbery texture and was pretty bland as well.We were then served the pla rad prik (NIS 118). Deep-fried fish is delicious enough on its own, but take the fried fish and baptize it in a spicy chili pineapple sauce as well as a ginger mint vinaigrette and you’ve got a recipe for ultimate tastiness.After a bit of a breather and another round of cocktails, we were served the beef massaman curry (NIS 84) with spicy mixtures of cloves, bay leaves and cinnamon. I have to admit, I’ve never had massaman curry before. Or if I have, I never paid much attention to the name. This was one of the tastiest curries I’ve ever had. The creamy curry is simmered in rich coconut milk as is usual with most curries, with tender potatoes as a filler. The beef was deliciously slow-cooked and tender.This went very well with the side dish of sticky rice, which soaked up all the yummy curry sauce.Equally delicious was the duck breast red curry (NIS 72) with grapes, cherry tomatoes and eggplant. It was a nice infusion of deep, earthy flavors without being overly hot.For dessert, we tried the green tea flan (NIS 48) as well as the golden chocolate mousse (NIS 48). Both were sinfully good and beautifully presented.

The writer was a guest of the restaurant.Nithan Thai
Not Kosher
Ha’arba’a Street 21, Tel Aviv
(03) 560-0555
Advertisement
Subscribe for our daily newsletter