Rimsky-Korsakov’s ‘The Tsar’s Bride,’ epitomozes the contrast between a man’s mechanical worldview and woman’s emotional and passionate one. 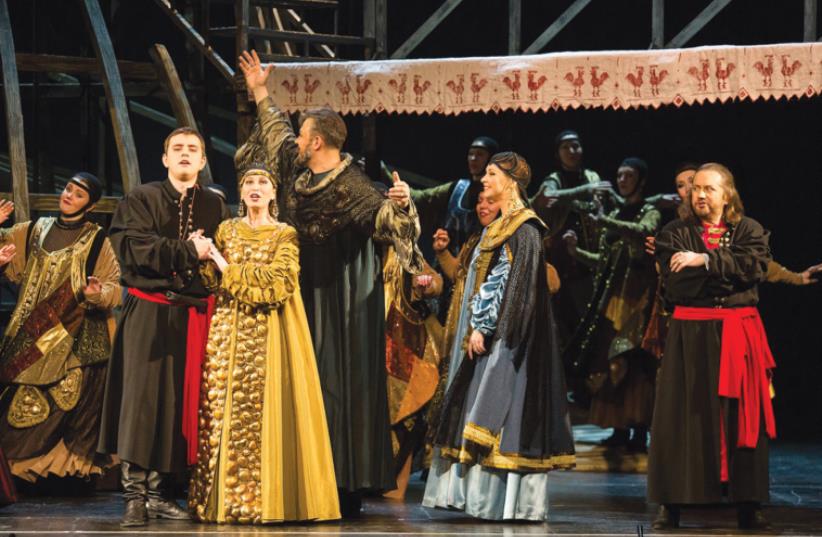 THE COMPANY of Rimsky-Korsakov’s The Tsar’s Bride performance at the the Israel Opera House
(photo credit: Courtesy)
Advertisement
Operas tend to comprise a heady mix of unabashedly sensitizing elements designed to get our juices well and truly going, and draw us in to the onstage action. But, as Mikhail Segelman notes, Rimsky-Korsakov’s The Tsar’s Bride has an extra contrary – possibly oxymoronic – element that is more than likely to up the interest of the audience at the Israel Opera House in Tel Aviv between May 8-19.Segelman holds the post of literary manager of the Kolobov Novaya Opera Theatre of Moscow, which will present its reading of the Rimsky-Korsakov work here for the first time. Segelman actually has quite a few feathers in his professional hat, including music historian, critic, pianist, educator and concert manager. As such, he is ideally placed to proffer his take on the opera’s subtext.“For me, the main idea [of the opera] is the contrast between the rude and mechanical man’s world and the world of women, full of emotions, passions and love,” he observes. “This is a very interesting view of Russian history, in a very interesting period of Russian history.”Segelman might also have added that there is an abundance of romantic interest, hatred and jealousy throughout the work.The era in question is not the temporal slot in which the opera was written – at the end of the 19th century – but the historic period featured in the work’s storyline. The work is set in the 16th century during the period when the aptly-named Ivan the Terrible ruled the Russian roost with an iron fist.The tsar may have thought he had the whole of the national house in order, however a member of his own cavalry retinue was busy causing a great deal of interrelation mayhem. Grigory Gryaznoy was not only a member of the Oprichniki – a force established by Ivan to terrorize and suppress people suspected of being opposed to the despot – he was also head over heels in love with Marfa, the daughter of a rich merchant who, much to the cavalry officer’s dismay, was already betrothed to a nobleman.The plot thickens when Gryaznoy’s mistress, Lyubasha, gets wind of Gryaznoy’s plan to get Marfa to fall in love with him, and things almost career totally out of control when the not inconsiderable matter of the ruler’s choice of bride-to-be complicates matters further.Interestingly, The Tsar’s Bride was written towards the end of the Tsarist period in Russia, during the reign of the last Tsar, Nicholas II. Although Nicholas committed all manner of atrocities, doing away with anyone he perceived as an opponent, encouraging pogroms and later engaging in disastrous military escapades, such as the Russo-Japanese War and the First World War, he was considered a weak ruler. As such, the creation of The Tsar’s Bride during that time could be construed as some form of political comment on the situation in Russia, and criticism of the Tsar’s regime. Segelman begs to differ.“I think it was just a time when people were interested in historical works,” he notes. “There were a lot of historical operas, for instance Boris Godunov (by Mussorgsky), and other operas that are not well known in the West.”Segelman notes that Rimsky-Korsakov did write the music for a later work that could well have been aimed at Nicholas II’s bumbling and catastrophic rule.“There is The Golden Cockerel which is directly connected with the idea of all this stupid totalitarianism,” says Segelman. “I would say that has a political content, but I’m not sure if The Tsar’s Bride is political. I don’t really think so.”At the end of the day, Segelman says that the opera is about entertainment. With its intoxicating mix of dramatic scenes, slots infused with unbridled merriment and not a little dancing, it seems the literary manager has a case.“This opera has a lot of bright music,” Segelman suggests.“There are a lot of bright symbols and a lot of bright choral sections.”Even so, the current show focuses primarily on the gripping storyline.“We pay attention to the main idea, to the several dramas within the opera, the women dramas” he continues.“The main drama is about Lyubasha, who is suffering because she is probably being abandoned by the main male character.”In fact, the Novaya Opera version is somewhat abridged, but great care was taken not to clip the core.“We cut around 25 minutes of the music, and some of the dancing episodes and the ethnic episodes,” says Segelman, adding that there is little danger of the Israeli audiences feeling short changed.“But we still retain the majority of the music – the choral episodes and the wonderful arias.”The latter will be performed by some of Russia’s finest operatic performers, including baritone Andrey Breus, who shares the role of Gryaznoy with Andjey Beletsky, and mezzo-sopranos Anastasia Bibicheva, Anna Victorova and Agunda Kulaeva as Lyubasha. Valery Kritskov will be on the conductor’s dais for all the shows and the logistics are the work of director Yuri Grymov, with set designer Vladimir Maximov and costume designer Maria Danilova helping to make the whole affair as lavish and visually alluring as possible.Interestingly, Rimsky-Korsakov’s operas do not generally get as much exposure in the West as works by, say, Tchaikovsky.“I think that is because Rimsky-Korsakov’s operas are not so dramatic,” muses Segelman, who also serves as conductor of the choir of the Moscow Choral Synagogue.“I think Western people have a special feeling for dramatic operas. I think there is quite a lot of drama in The Tsar’s Bride, but Rimsky-Korsakov’s approach to composing was to make big contrasts and picturesque scenes. It is a different approach to the Tchaikovsky one.”Considering The Tsar’s Bride has been doing the rounds of the world for around 10 years now, it doesn’t look like Rimsky-Korsakov’s singular take on portraying operatic storylines should be a problem for the Israel Opera audiences.

For tickets and more information: (03) 692-7777 and www.israel-opera.co.il.
Advertisement
Subscribe for our daily newsletter