Doughnuts around the world 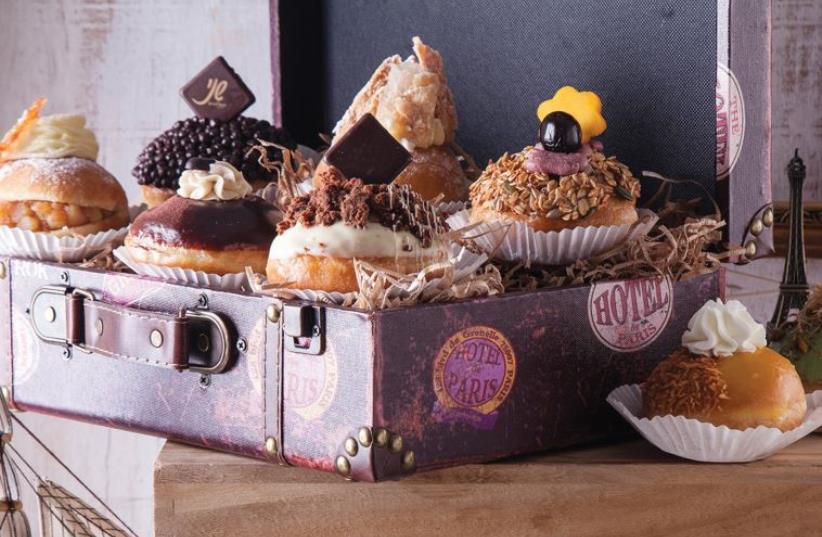 ITALIAN DOUGHNUT
Makes about 20 This is a savory doughnut, enriched with cream cheese, pesto, Parmesan and pine nuts – you don’t have to wait for dessert to eat this one.✔ 1 kg. flour
✔ 50 gr. fresh yeast
✔ 4 eggs
✔ 50 gr. sugar
✔ 70 gr. lightly roasted pine nuts
✔ ½ Tbsp. salt
✔ 150 gr. Parmesan cheese, grated
✔ 100 ml. olive oil
✔ 1 cup lukewarm milk
✔ Oil for deep frying For the filling:
✔ 250 gr. cream cheese (30%)
✔ 2 heaping tsp. basil pesto For garnish:
✔ Parmesan cheese shavings
✔ Roasted pine nuts Place salt, sugar, eggs and flour in a mixer bowl with a kneading arm.Place the yeast on top of the flour so it does not touch the salt. Start kneading, adding the oil gradually. Towards the end of the kneading add the pine nuts.Cover the dough and leave to rise for 30 minutes.Preheat oven to 35°. Using your hands make 50 gr. balls and place them on a greased baking sheet, leaving about 5 cm. between them. Spray or brush the doughnuts with canola oil so they do not dry. Place the baking sheet in the oven and leave to rise for 30 minutes.Heat the oil to 150° and fry the doughnuts 2 minutes on each side. Transfer from the oil to paper towels.In a bowl, mix together the cream cheese and the pesto, taste and adjust seasoning.Fill a pastry syringe with the cream cheese mixture and fill the doughnuts.Use the same cream cheese mixture to glaze the doughnuts and garnish with pine nuts and Parmesan shavings.HUNGARIAN PAPANASH
Makes 12 large doughnuts Called papanash in Hungary and papanasi in Romania, these dumplings can be either boiled or fried. Filled with sour cream and cherry jam, and topped with an almond tuile they are a real treat. The recipe was passed on to Abramovitz from his mother who came from Hungary. The tuile is his modern-day adaption to the traditional recipe.✔ 1 kg. ricotta cheese
✔ 350 gr. flour
✔ 4 eggs
✔ 100 gr. powdered sugar
✔ 100 gr. semolina (solet)
✔ 30 gr. baking soda
✔ Pinch salt
✔ Zest of 1 lemon
✔ 2 Tbsp. sugar For the filling:
✔ 400 gr. raspberry or other jam
✔ 300 gr. sour cream For the almond tuile:
✔ 160 gr. butter
✔ 200 gr. sugar
✔ 200 gr. slivered almonds, chopped
✔ 70 gr. flour
✔ 60 ml. waterPlace cheese, eggs, salt and baking soda in a mixer bowl and knead for 3 minutes. Add the flour, semolina and lemon zest. Knead for 8 minutes and refrigerate for 30 minutes.Remove from the refrigerator and place dough on a lightly floured work surface.Roll out to until the dough is 5 cm. thick and even.Using a glass cut rounds and using a small glass cut a small hole in each doughnut, to make smaller doughnuts.Let the doughnuts “rest” for 5 minutes.Heat oil in a pot and fry the doughnuts and the small doughnuts 2 minutes on each side.Transfer to paper towels or place on a rack to let oil drip.To serve: Smear a Tbsp. of sour cream on each plate, place the large doughnuts on the plate and spread jam on them. Finish by placing the small doughnut in the middle of each one. Garnish with the tuile pieces around the papanash.To prepare the tuile: Preheat oven to 190°.In a pot heat together the sugar and butter until the sugar dissolves. Remove from heat, add the water and stir. In another bowl mix together the almonds and flour and add into the sugar mixture. Quickly mix and transfer to a small greased baking pan.Bake for 10 minutes until golden. Cool, remove from the pan and break into large pieces. ■ Recipes and photos courtesy of Arie Abramovitz, Shany Bakeries, Haifa.FROM SCANDINAVIA
Makes 20-25 Doughnuts are eaten in the Nordic countries around Christmastime.The doughnut is injected with raspberry jam before frying – adding deeper flavor. The topping is simple – sugar. Ava Hanssen, the chief baker of Lehem Yayin Bakery, came here from Denmark in 1993. He studied baking in Copenhagen and specializes in European-style breads.Alongside him works Yasmin Nimrodi, who moved with her parents to Denmark as a child and came back here after studying baking there. The two gave us their recipe for traditional Scandinavian doughnuts that is more interesting than it looks.✔ 6½ cups flour
✔ ½ cup sugar
✔ ½ Tbsp. salt
✔ 30 gr. dry yeast
✔ ¼ cup amaretto almond liquor
✔ 1 egg
✔ 1½ cups water
✔ ½ cup oil
✔ Good quality raspberry or strawberry jam In a mixer bowl knead all ingredients together until smooth. Leave dough to rise until double in size (about 30 minutes).Cut balls out of the dough. Try to make 20 gr. balls. Place the balls on a greased baking sheet.Using a pastry syringe, inject each dough ball with jam. The Scandinavians prefer reduced-sugar raspberry jam because it is tart. But strawberry jam works just as well. Make sure the ball is closed on all sides after injecting it with jam.Place the doughnuts in a 30° oven to rise until double in size.Meanwhile heat the frying oil to 150°.Gently drop the doughnuts in the hot oil and fry until golden on all sides.Transfer to a deep plate with sugar, roll until covered on all sides, and place on a serving dish.Recipe and photo courtesy of Lehem Yayin Bakery.
Advertisement
Subscribe for our daily newsletter