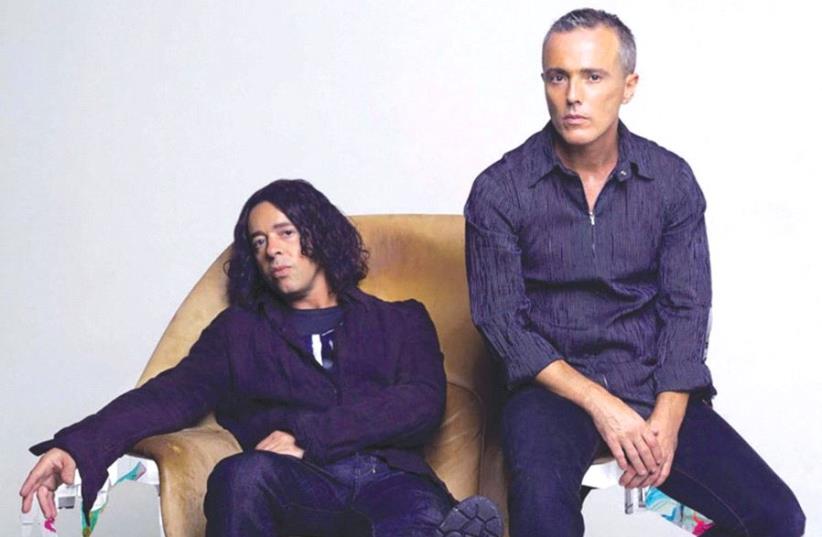 TEARS FOR FEARS founding members Roland Orzabal (left) and Curt Smith
(photo credit: Courtesy)
Advertisement
Iconic ’80s pop band Tears for Fears will be “Sowing the Seeds of Love” as they perform at Tel Aviv’s Menora Mivtachim Arena on July 5.Formed in 1981 in Bath, England by childhood friends Roland Orzabal and Curt Smith, Tears for Fears first tasted success with their 1983 debut album The Hurting, which featured the hit single “Mad World.”While the group found success at home in the UK, success in the States didn’t happen until the duo’s second release, 1985’s Songs from the Big Chair, which reached number one on the US Billboard 200, achieving multi-platinum status in both the UK and the US. It contained two Billboard Hot 100 number ones: “Shout” and “Everybody Wants to Rule the World,” the latter winning the Brit Award for Best British Single in 1986.The duo’s partnership would last only one more album, 1989’s Seeds of Love.Featuring soulful vocals from Oleta Adams, who dominated the hit “Woman in Chains,” the album became a hit, while the single “Sowing the Seeds of Love” reached number two in the US.Throughout the ’90s, the two founding members kept busy on their own projects until Smith was approached by Orzabal’s then manager in 2000 about working together again. That led to their reunion album, Everybody Loves a Happy Ending, released in the spring of 2005.Some of their other biggest hits include “Head Over Heels,” “Pale Shelter,” “Change” and “Advice for the Young at Heart.”