Festival: Churning out them vibes

Local ethno-rock star Mosh Ben-Ari is looking forward to performing his own mix of soul, rock and reggae at this year’s Tamar Festival. 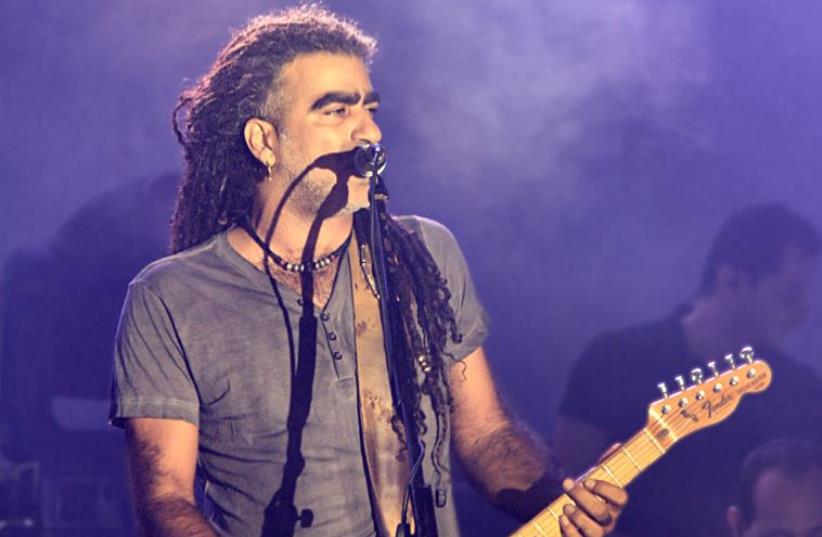 Mosh Ben-Ari
(photo credit: NEUKOLN/WIKIMEDIA COMMONS)
Advertisement
Mosh Ben-Ari has been around a while. Fast approaching his 45th birthday, the rocker with trademark dreadlocks and definitively stirring trill in his voice has been packing them in at venues up and down the country for a decade and a half. No doubt his show at this year’s Tamar Festival, which will take place at four stunning locations near the Dead Sea between September 28 and October 2, will be sold out too.I first came across Ben-Ari around 15 years ago, when he was the youngest member of the highly successful New Age band Sheva. All the group members lived in and around Moshav Amirim in the Upper Galilee and met for rehearsals, and just to hang out, at the spiritually oriented Amirei Hagalil guest house just down the road from the moshav.At the time he was taking his first steps toward a solo career, and his debut offering, Ad Elai, was hitting the record stores – this was back in the day when people actually went to stores to buy CDs. Ben-Ari’s sophomore effort, Derech, came out in 2004 and went gold and there have been half a dozen more albums, including one live recording and a compilation.When I caught up with him Ben- Ari was about to take the stage at Kibbutz Kfar Blum in the Upper Galilee, but his thoughts had begun to turn to his forthcoming grand gig at the Heichal Masada.“We have been doing a bunch of summer shows for the past few months, and the show at the Tamar Festival will be a kind of summation of all of that,” said the rocker.“After that we’ll start thinking about the next shows, and what we are going to play.”One thing is certain: Ben-Ari is a mover and a shaker. His last album, Kmo Bachaim (Just Like in Life), came out in 2013 and the next one is already bubbling.“We’ll play all kinds of numbers from right through my solo career to date,” says Ben-Ari. “We may do some new stuff as well at Masada.I’m not quite sure yet.”While Ben-Ari seems to know where he is heading, he never forgets whence he comes. Before he became a star in his own right he spent several years as a member of the leading proponent of New Age-oriented music and vibes in the country. Sheva was a fixture at all the major festivals of the genre, like Shantippi and Beresheet. A show they performed at the HaUman 17 club in Jerusalem around 2000 was suffused with positive energies, and there was an unmistakable vibe of togetherness and palpable plain old goodness. The high point of the concert was an emotive rendition of one of the band’s most popular numbers, “Shir Lamaalot,” with Ben-Ari on vocals. “That was a wonderful time and that’s where I come from, that where it all started for me,” he recalls. “That is something I always take with me.”Naturally, though, Ben-Ari has come a long way artistically since those heady days with the Sheva septet.“I have been through lots of different styles since then,” he notes.“But it is all one amalgam of a true path.”The latter epithet comes up frequently in our conversation, and it seems that Ben-Ari is at pains to convey the sincerity and honesty of his professional ethos.“I don’t look for shortcuts. You have to go through all the trials and tribulations if you want to be creative.”It sounds like Ben-Ari subscribes to the clichéd image of the suffering artist.“I’m not sure about that,” he posits with alacrity. “But an artist cannot know that shortcuts, if he takes any, will really produce the desired results. You have to be careful about how much you are really into what you are doing, and how much attention you pay to detail.You can’t just let things ride. That’s not the way of a true artist. You have to go for broke every time, and you can’t expect anyone to do the work for you, to make your job easier.That simply isn’t the way to go.”Ben-Ari has indeed paid his dues over the years, and has always given his all regardless of the venue or the size of the audience. A couple of years or so after that memorable gig at HaUman 17 I caught Ben-Ari’s performance at a far more compact joint in downtown Jerusalem.There couldn’t have been more than 60 or 70 people crammed into back room of the bar, but there was no drop in intensity or intent from the singer-guitarist. He could just as easily have been playing to a stadium crowd.A decade-and-a-half into his solo career, with countless sellout gigs across the globe behind him, and a bucketload or two of accrued savoirfaire, presumably Ben-Ari brings more seasoning and street-level wisdom to his output than in those early days.“Of course I feed off all the experience I have gained,” concurs Ben- Ari. “It is like a wine after some aging. I don’t know if I have ripened like a good wine but I am less obstreperous. And, you know, you can’t restore your innocence, and that’s fine too. I am who I am, and I try to give my all to my audiences, in the purest way I can.”Elsewhere on the Tamar Festival roster you can find an impressive slew of heavyweight acts, including the likes of the Idan Reichel Project, The Angelcy, Asaf Avidan, Ehud Banai, Balkan Beat Box and Hayehudim, to mention but a few.The normally placid saline-heavy waters of the Dead Sea may be a little choppier than usual at the end of the month.

For tickets and more information: http://tamarfestival.com.
Advertisement
Subscribe for our daily newsletter