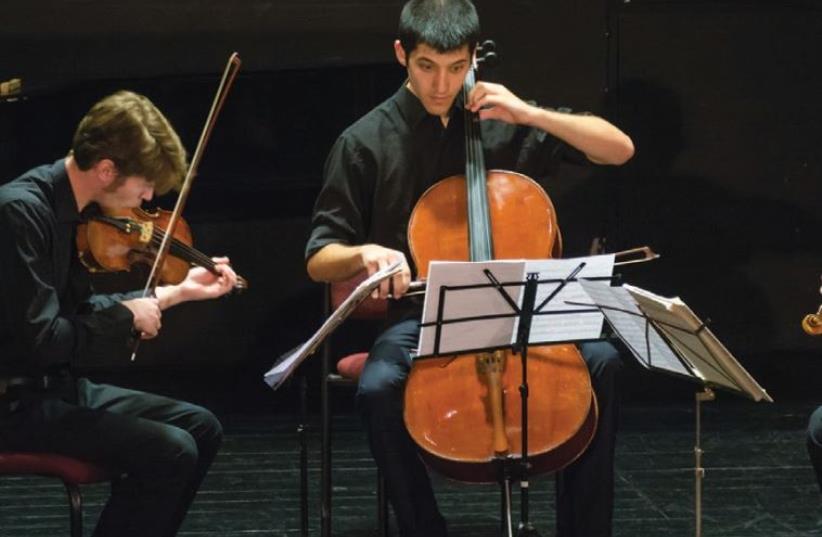 THE MUSETHICA trio performed works by Schubert, Bach and Beethoven at this year’s Voice of Music Festival.
(photo credit: GUY KROCCI)
Advertisement
The Voice of Music Festival is one of those rare fixtures on the national cultural agenda – an event that appears to get better over time, like the proverbial fine wine.The 32nd edition of the now venerable festival, which closed at Kfar Blum on Saturday, left the packed audiences suitably pleasured, and with food for thought and some high emotion. The latter was certainly provided by the flagship slot, the Violins of Hope concert which took place on Thursday evening. The title for the show came from the fact that the string section featured two violins that survived the Holocaust, and were lovingly and painstakingly resuscitated by Tel Aviv master instrument builder Amnon Weinstein. A couple of Weinstein’s celli were also pressed into service for the occasion.The emotional content of the performance was further heightened by the deftly delivered MC spot filled by popular radio presenter Benny Hendel, who enlightened the audience about the original owners of the revived instruments, as well as about the works themselves. The latter included compositions by Mahler, J.S. Bach and Beethoven, and more contemporary works by Max Bruch and Joseph Achron, and the Israeli premiere of the eponymous composition, written by Ohad Ben-Ari. Ben-Ari was also on the conductor’s podium for the entire concert.The trio and quartet lineups included Guy Braunstein and Natasha Sher on violins, French harpist Marie-Pierre Langlamet and cellist Zvi Plesser, who has also served as the festival’s artistic director for the past few years. All the instrumentalists excelled, delivering melodic passages, delicate excerpts and powerful sections with the requisite skill and sensitivity. There was an enthused audience response for all the works, and particularly for Ben-Ari’s closing piece which was both thrilling and sinister.Other highlights of the festival included a delightfully rendered program of works by Schubert, Bach, Beethoven and 20th-century Czech composer Bohuslav Martinů, by a trio of violist Avri Levitan, violinist Edi Kotlyar and cellist Haran Meltzer. The early Friday morning concert formed part of the ongoing Musethica program, which brings quality classical music to sections of the population, across the globe, who would not normally get to a concert hall. The Musethica (the name comprises a hybrid of “music” and “ethics”) listeners include senior citizens, children with special needs and prison inmates.There was some fun on Friday evening, when Matan Porat provided suitably stirring live piano accompaniment to a 1928 silent movie called Steamboat Bill Jr., starring the inimitable Buster Keaton. And Porat’s Mizmorim for clarinet and string quartet was given its world premiere at the closing concert on Saturday, with Chen Halevi on the wind instrument, with Ravel’s Introduction and Allegro for harp, flute, clarinet and string quartet, and Brahms’s String Quartet in A minor also on the program. The latter was performed by the Arp Quartet.The Voice of Music Festival tends to incorporate some non-classical fare too, and Friday evening’s Man of the Next World show, at the newly built Galilion Hotel just down the road from Kfar Blum, provided some quality pop and rock entertainment, with the odd bit of jazz seasoning thrown in for good measure. The concert starred veteran bassist-vocalist Eli Magen who has just released a retrospective double CD set.