Dining: A meal with a view 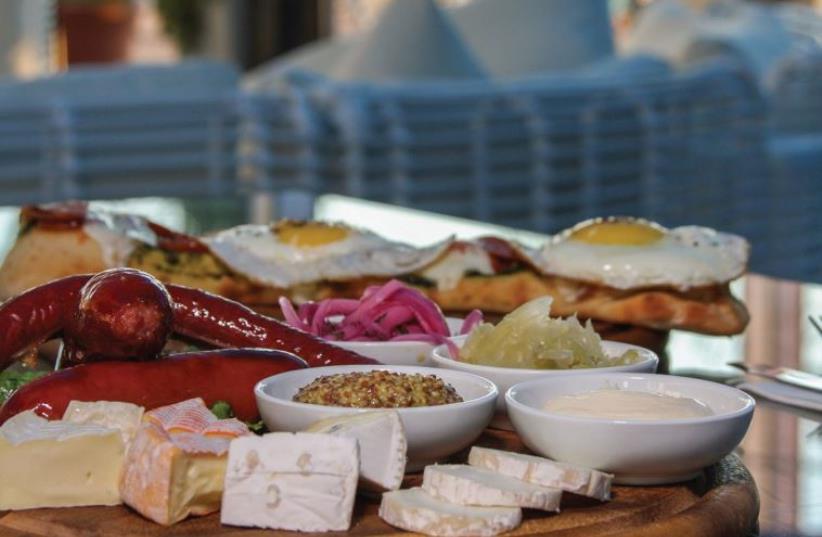 Gordon Balcony restaurant
(photo credit: PR)
Advertisement
In the middle of a hectic work week, nothing sounds better than a relaxing evening by the seaside. Thankfully, Gordon Balcony, situated by Tel Aviv’s Gordon Beach, is a soothing mix of calm and class, with rolling waves just beyond your table.The beach and the waves beckon, and the sea air envelops you as you sit in the open-air restaurant. At the restaurant’s bar, you can sit and watch the sea while savoring delightful cocktails or sipping on a cappuccino.Gordon Balcony is run by chef Gal Keren. The menu is quite extensive, with a wide array of salads, pastas, seafood and meat dishes.Before the appetizers appeared, my dining companion and I enjoyed a couple of refreshing cocktails prepared by head bartender Noam Priel, who also works his cocktail magic at Tel Aviv’s popular Imperial Bar. We were treated to the strawberry and peach margaritas. Both drinks had great flavor and were not too sweet; the perfect blend.We were both going to start with the Greek salad, but the waitress talked us into sharing the Italian salad (NIS 64). She was spot-on in her recommendation. It was a great salad, chock full of crisp lettuce, fresh basil leaves, roasted pepper strips, roasted eggplant, mushrooms, shredded mozzarella, shredded prosciutto, cherry tomatoes and purple onion strips, topped with the just the right amount of balsamic dressing. It had a lot of good flavors that melded together well.It was the perfect start to the meal.This was followed by the merguez sausage served on an open roll with aioli, mustard and cabbage (NIS 38). The texture of the dish was excellent, and the blend of spices, meat and sauces played perfectly on my tongue like an orchestra performing a concerto.Next up was the Italian pizza (NIS 56). The pizza was very fluffy, and the crust had just the right amount of crispness, not one of those crusts that are a fight to eat.And there was a good amount of sauce and cheese without making the pizza soggy. The pepperoni was delicious, with just the right amount of spiciness.After a bit of a breather, it was on to the mains. We were served the grilled salmon steak (NIS 79), which was very tasty. I am not much of a fish person, but lately I have made myself eat more fish, and this dish helped me with wanting to continue to branch out into the fish domain.Next up was the 250 gr. Gordon burger, which comes with a wide choice of toppings (NIS 59). This is definitely not a hamburger for the dainty or the weak! The patty was thick, and the meat was juicy and flavorful.After another breather, it was on to dessert. We first tried the chocolate soufflé (NIS 39), which had a lot of lovely textures and the right level of sweetness. Every bite was light, fluffy chocolate mixed with molten oozing chocolate.This was followed by the mixed berries Pavlova (NIS 38). The airfilled, crispy orbs of meringue were delightful, especially when crushed into the pools of white chocolate cream and mixed berries sauce that garnished the plate.Overall, it was a delicious dinner. The location alone is enough to make for a supremely relaxing experience, and the food is as enticing as the view.