For the love of Latin

Uruguay-born Israeli conductor Gisele Ben-Dor speaks to the ‘Post’ on studying with Leonard Bernstein and being known as the champion of Latin American music. 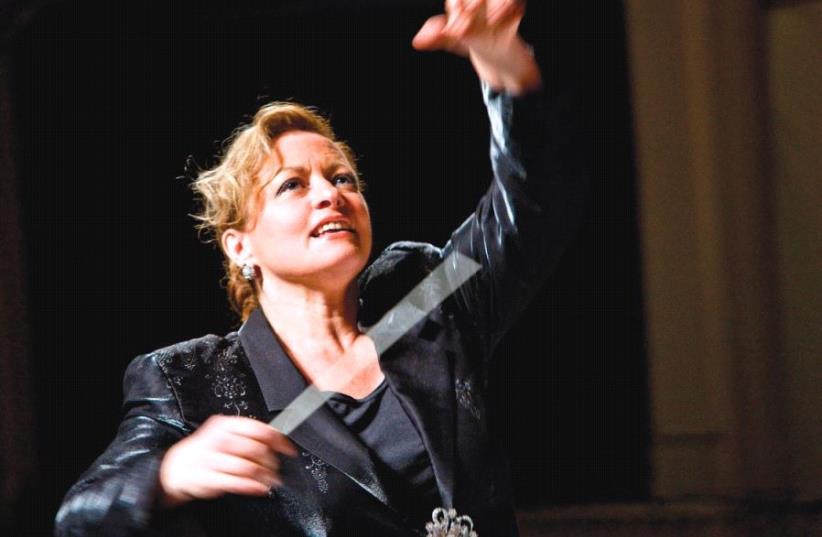 MAESTRO MAGIC: ‘You can’t see the audience, but you can feel their attention,’ says classical conductor Gisele Ben-Dor.
(photo credit: HENRY FAIR)
Advertisement
The image of a classical conductor is that of a serious person, a person addressed with respect and silence, a leader and an expert. It is the conductor who unifies the orchestra, who finds the perfect balance among thousands of notes, who takes individual instruments and turns them into a harmonious whole.“You can’t see the audience,” says Gisele Ben-Dor, “but you can feel their attention.”Seated at a table in Café Noir, sipping Sprite and nibbling cake, conductor Ben-Dor speaks of her life at the helm of the orchestra pit. Her visit to Israel coincides with the 100th birthday of Argentinian composer Alberto Ginastera. This week, she will conduct the Israel Chamber Orchestra in Ginastera’s ballet La Estancia in its entirety, marking the first time this work has ever been performed in Israel. Two performances will be given at the Tel Aviv Museum of Art.“We had to memorize parts of Jose Fernandez’s Martin Fierro when I was in school. Ginastera took some of these verses and put them in his music. The first time I heard Ginastera, I was so surprised to hear these lines in classical music, it felt like coming home,” says Ben- Dor with a smile.“He wrote La Estancia in the first period of his creative life. It was his eighth opus, which is very early. It was during his nationalistic phase; he wasn’t trying to be universal. It is a period for most composers where it is very clear where they come from and what they have heard. And these pieces are often very audience friendly, very honest and attractive.”Ben-Dor is blond with bright blue eyes. Her flawless, rich English is peppered with an accent.English is her fourth language following Spanish, Italian and French, and preceding Hebrew and a few others. She is the mother of two boys and a player of many instruments. She goes by “maestro,” as the largely acceptable “maestra” bore too many childhood classroom associations. “‘Maestra’ is what we call a schoolteacher in elementary school. It didn’t feel right.”“I was an obsessive kid,” she says, “I asked my parents to let me play the piano and I spent a lot of time with it.I was very attracted to the range of the instrument. At 13, still in Uruguay, I started to conduct choirs. I really liked the polyphony of it. I played anything I could get my hands on.” Ben-Dor occasionally performs on the guitar but finds it nerve-wracking as compared to leading an orchestra.In her last two years of high school, Ben-Dor was asked to choose a major.“I was meant to be an accountant. Strangely, as part of some archaic system in Uruguay, as an accountant you had to study Italian and French. Those languages wouldn’t have helped me at all as an accountant but they were very handy as a musician. In any case, when the time came to enroll to university, I could not commit to accounting. I knew I wanted to conduct but I had no idea how to become a conductor.”In 1973, Ben-Dor immigrated to Israel with her entire family.“Everyone came. My parents and grandparents...everyone. At that time, moving was not easy. My main activity was to learn how to live here,” she recalls.Though the drive to music was still strong, Ben-Dor put her plans on hold to acclimate. Eventually, she attended an audition for a prestigious school in Berlin.“It was a week-long audition with every exam imaginable.In the end, I was accepted. I came back to Israel and turned down the offer. For three years after that I studied privately with teachers in Israel. And then I was offered to go to the United States. It felt right and it was a success. I was given a lot of opportunities and I used them.”It was in the States that Ben-Dor came to know Leonard Bernstein.“He was an educator,” she remembers. “He had this great passion for sharing music. I remember this one time, we were at a festival of Bavarian music and he was going to conduct that evening. He was meant to be resting. He called us students and he opened the score. He sat down at the piano and sang the entire thing from start to finish. They had to drag him away from the piano, throw a jacket on him and put him on stage.”In the international community, Ben-Dor is known as the champion of Latin American music.“It’s always obvious that a French conductor will play French composers and a Russian conductor will play Russian music. As a Latin American, how many composers do you have to choose from?” While there may not be as many big names as Western Europe boasts, Latin America has produced a wealth of classical music, much of which Ben-Dor has had a hand in purveying.“I have to hustle,” she smiles. “When a festival calls me and asks to play Ginastera’s La Estancia, they ask for the suite. And I tell them, ‘You know, there’s a whole ballet.’ I want to make sure that the music gets heard.That is always a challenge.”To give a taste of the original, two local dancers will perform sections of the original ballet.Pasion Latina: Israel Chamber Orchestra will be performed today and tomorrow at 8:30 p.m. For more information, visit www.classictic.com.