Four directors walk into the Old City – and make a film

The Quarters project, an anthology movie composed of four short films about the Old City of Jerusalem was officially launched on Sunday at the 34th Jerusalem Film Festival. 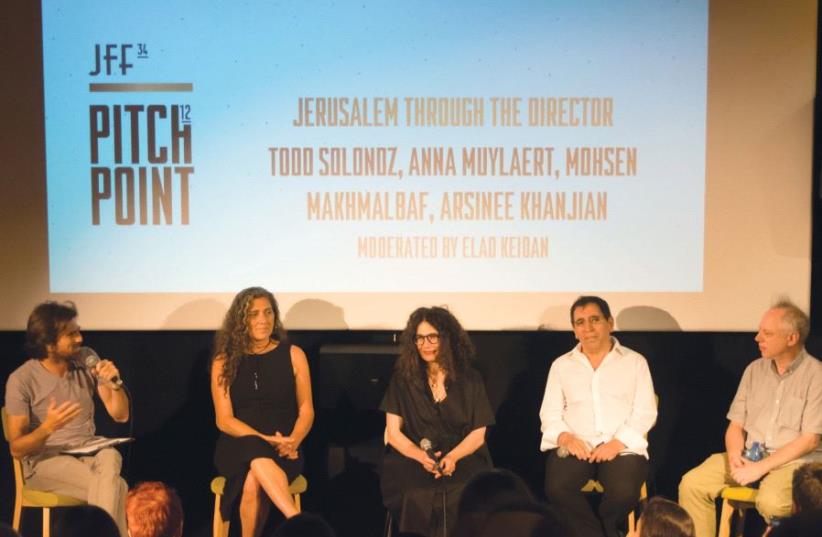 INTERNATIONAL FILMMAKERS (from left) Elad Keidan, Anna Muylaert, Arsinée Khanjian, Mohsen Makhmalbaf and Todd Solondz participate in a panel discussion at the Jerusalem Cinematheque
(photo credit: OREN MYERS/JFF)
Advertisement
The Quarters project, an anthology movie composed of four short films about the Old City of Jerusalem by four international directors – Todd Solondz, Mohsen Makhmalbaf, Anna Muylaert and Arsinée Khanjian – was officially launched on Sunday at the 34th Jerusalem Film Festival at the Jerusalem Cinematheque.These directors are set to start shooting in 2018. The movie is being produced by Green Productions, in collaboration with Six Island Films and Migdal Films, and with director/producer Eran Riklis (Dancing Arabs, The Syrian Bride).Based on the discussion among the directors at the launch, the project is likely to be as lively, contentious and complex as the Old City itself.The four directors, in a panel led by Israeli director Elad Keidan (Afterthought), agreed only that they would do their best to tell original stories set in the Old City.As to whether these stories would be linked, well, like much of what happens in Jerusalem, the final decision will be subject to negotiations.The Lebanese/Canadian actress Khanjian (Lost in Armenia, Ararat) who will be making her directorial debut with her film about the Armenian Quarter, asked the audience at the event whether they felt they would need some central figure or plot device that would connect the films.“Let’s not ask,” said Solondz, the American indie director known for such dark looks at the human condition as Welcome to the Dollhouse, Happiness, and, most recently, Wiener-Dog.He said that his film would be about an American boy having his bar mitzva at the Western Wall, and that it would be cast mostly with actors from the US.Solondz said he spent two summers with his family in Netanya in the late Sixties and early Seventies, but that, like all the directors on the project, he did not know the Old City well and has been learning about it on his recent visits. His film will not be autobiographical: “I didn’t have a bar mitzva here. We had a catered affair in the suburbs, in New Jersey.” But while visiting the Old City, he realized that bar mitzvas in Jerusalem are “a big operation.” A lot of people have their bar mitzva here, he said. “It’s all material.”Mohsen Makhmalbaf, the Iranian director who has lived in exile in Europe for many years and who has made more than 40 films, among them Kandahar, The President and the documentary about the Bahai Gardens in Haifa, The Gardener, said his film about the Muslim Quarter would be in Arabic and would use mainly local, non-professional actors. He spoke about getting beyond the “touristic layer” to find the true identity of the Old City, and said that his own life had given him insights into this area.At 17, during the shah’s regime, he attacked police with a knife and spent years in prison. “I thought violence could change the situation,” he said. He used that time to educate himself and became disillusioned with politics. “I realized we all have a dictator in our brain.” A frequent visitor to Israel, he feels passionately that movies have the power to affect change, and said his documentary, Afghan Alphabet, about Afghan refugee children in Iran, helped half a million children gain access to schooling.“We have cinema tools and we have desire for change, why not?” he said, a comment that drew applause.Khanjian, who is of Armenian descent, talked about the Armenian heritage of bringing photography to the Middle East, and said that her film on the Armenian Quarter would be partly about a photographer, and that it would be mainly in English.Muylaert is a Brazilian writer/director whose films include The Second Mother and Don’t Tell My Son, which focus on class struggle. She also wrote the screenplay for Cao Hamburger’s The Year My Parents Went on Vacation, about a boy whose parents leave him with his grandfather in the Jewish neighborhood of Bom Retiro in Sao Paolo when they are wanted by police for political activities, but said that the neighborhood is now “a little bit Jewish but mostly Korean.” A Christian who is not religious, she said she was finding her way to an understanding of the Christian Quarter.“I don’t have a religious background, but I wanted to discuss faith,” she said. Touring the Old City recently on a sweltering day, “I was feeling, I am Brazilian, what am I doing here?” But she became intrigued with what she saw as she walked, and thought, “I’m Brazilian, but I’m human.” Her film will be mostly in Portuguese.As usual at panels in Jerusalem, those who asked questions were quite opinionated, including one woman who seemed not to understand that each director was writing his or her own script independently, and derided the project as “propaganda.”Solondz seemed amused by her statement, saying, “If I’m doing a propaganda movie, for me, it’s something really fresh! It’s very good to try something new.”Makhmalbaf seemed to resolve the conflict, saying, “Let’s see the film and then judge.”