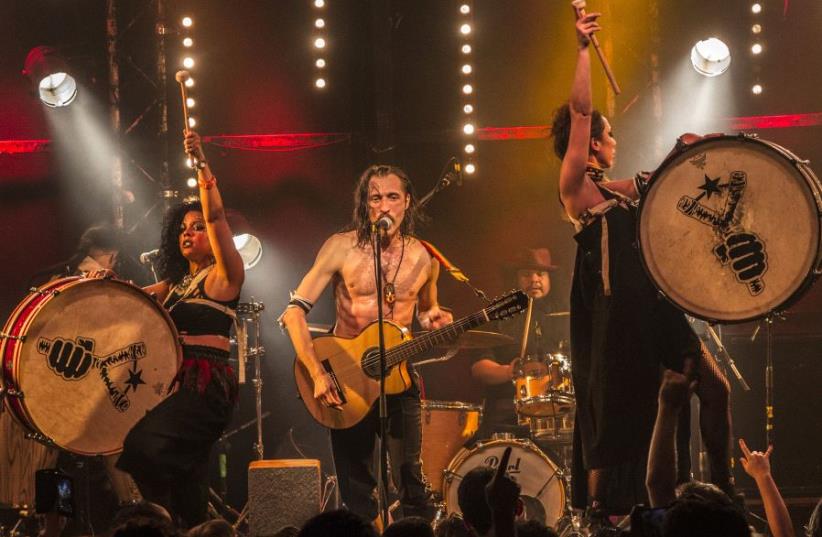 Gogol Bordello live in Tel Aviv- June 16, 2017
(photo credit: ROY DANIEL)
Advertisement
“I’m not a Jew, but something like one,” Gogol Bordello frontman Eugene Hutz sang in the hit “Wonderlust King,” as the 9-member self-proclaimed  “Gypsy Punk” extravaganza stunned a sold-out crowd at Tel Aviv’s Barby Club Friday night.It’s not obvious what he might mean by that lyric, though little is obvious about the transnational musical group that was founded  in 1999. Perhaps calling on the age-old image of the ‘wandering Jew,’ there were many moments of visceral connection between Hutz and his eager Israeli crowd. Hutz, born near Kiev, Ukraine, fled as a refugee to the United States at age 14, and draws on the Romani roots from his mother’s side in his musical masterpieces. The raucous crew took the stage, Hutz swinging wine bottle in hand, and opened with “Break into your higher self.” The crowd was with them from beat one, jumping, singing along, and completely engaged with the show. In 2017, it was amazing to see an entire songs go by without a raised cell phone in sight.Photo by: Roy DanielBut why would anyone need to take out their phone when there was so much to experience right in front of them? Gogol Bordello put on a non-stop, all-singing, all-dancing circus for the senses. They made use of every inch of the stage, playing to every onlooker, band members weaving in between each other, standing on amps, standing on top each other, and engaging in one stunt after another.   Each performer was memorable, from the full green beard of bassist Thomas Gobena, to the strings fraying off the bow of relentless violinist Sergey Ryabstev, to the rapid Spanish rapping by percussionist and MC Pedro Erazo, to the entrancing dancing and harmonizing by percussionists/vocalists Elizabeth Sun and TOBI. Each member of the ensemble had jaw-dropping moments, which was no easy feat when sharing a stage with Hutz while he drenched himself and the audience in red wine, or had the front of the crowd hold a giant marching drum up so he could stand on it and continue to sing.But underneath the spectacle was serious, shake-the-walls-down music. Favorites like “Pala Tute” had the audience pulsing and screaming along, and the crowd went wild for particular lyrics, like when he adapted “Trans-Continental Hustle” to say “When death comes in, in fact I will not be found anywhere… not in Chicago, not in Nevada, not TEL AVIV, or Guadalajara!” or the crowd pleaser line from the same song, “We gonna build new kind of globalizer, without a Panzerfaust or a Schmeisser, and may the sound of our contaminated beat sweep all the Nazi purists off their feet.” Photo by: Roy DanielThe whipped up, frenzied energy on and off stage perhaps met its peak when the beat dropped and the accordion came in (you don’t hear that every day) during the hit “Start Wearing Purple.”“Ain’t no party like a Gypsy party, ‘cause a Gypsy party don’t stop,” the group boasted on stage. Speaking of Gypsy, Hutz had this to say to Time Out Tel Aviv: “The word gypsy is subject to a horrendous amount of misinterpretation. Another meaning is that it’s somebody who embraces the lifestyle of constantly relocating. That really resonated and spoke to me, and I became an expert in that field in an ethnomusicological sense. At this point, what does it mean? All my Romani friends are laughing at me because they are like, ‘You motherf**ker!’ You are still living that life while we are all sitting in one place.”Whether that makes him “something like a Jew” or not, for a few hours, he convinced Tel Aviv they were part of the adventure, too.  It’s unlikely that Tel Aviv has seen this level of fully committed, non-stop artistic antics since the group’s last Israel shows in 2009 and 2011, and if you don’t want to wait until their next tour to join the fun, there are still a few tickets left for their final performance this visit on Sunday. For info, visit: https://www.barby.co.il/