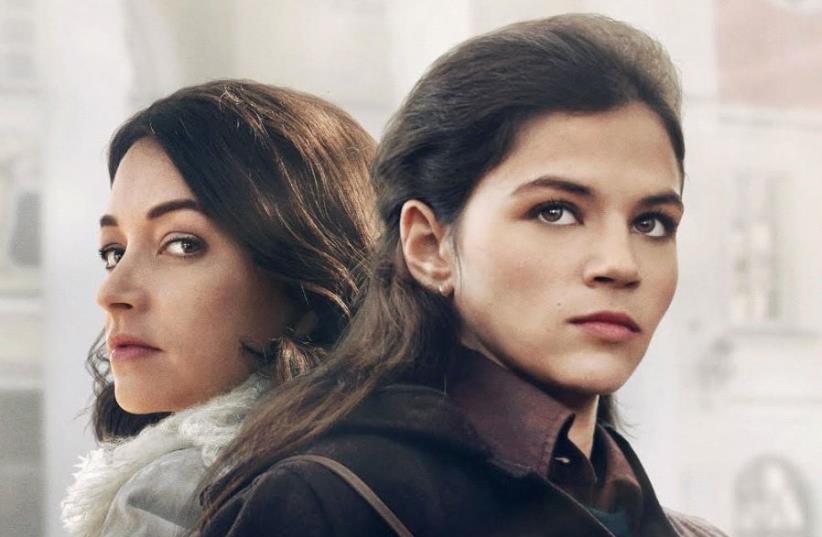 The film 'Past Life' with Nelly Tagar with Joy Rieger.
(photo credit: SAMUEL GOLDWYN FILMS)
Advertisement
Some of the year’s quirkiest, most quintessentially Israeli movies have just opened or are about to open in the US, and it will be interesting to see how they are received.These films – Rama Burshtein’s The Wedding Plan (its English title in Israel was Through the Wall, a literal translation of its Israeli title), Emil Ben-Shimon’s The Women’s Balcony and Avi Nesher’s Past Life – were big hits in Israel. Altogether, they sold around 800,000 tickets locally, with The Women’s Balcony, the highest-grossing Israeli movie in three years, selling 450,000.But with Israeli films, what is most popular at home does not always translate into success abroad.All three are set completely or mostly in Jerusalem, a change from much of what Americans have seen, since in the past, almost all Israeli movies took place in and around Tel Aviv.The Wedding Plan and The Women’s Balcony are both about different sectors of the religious community, and undoubtedly some of the nuances that resonate here will be lost on American audiences. Past Life deals with how Israelis deal with the Holocaust, sexism in the Israeli music establishment and Israeli politics in 1977.But if the plots, characters and actors captivate US audiences, it won’t matter if the viewers don’t catch every reference, and early indications are that these movies will indeed strike a chord with Americans.The Wedding Plan, which opened in New York on May 12, tells the story of Michal (Noa Koler), a young woman who became ultra-Orthodox as an adult and longs to get married. She finally gets engaged, but suddenly her fiancée breaks it off. She decides that since the hall is paid for, she will find a groom in three weeks and she embarks on a period of frantic dating.One man she meets outside the dating realm, Yos (Oz Zehavi), a secular Israeli pop singer exploring his spiritual side, starts talking to her on a pilgrimage to Uman, the birthplace of Rabbi Nahman, in the Ukraine. Will casual US viewers understand why they are there? No, but Burshtein’s fast-paced script and Koler’s appealing performance – both of which won Ophir Awards – will captivate them sufficiently so that they won’t spend time wondering.Ben Kenigsberg wrote in The New York Times that this “prickly, delicately layered film from Rama Burshtein...has the tangled ambiguity of a Talmudic lesson... [and] manages to be respectful of traditions while at the same time feeling modern, even progressive.”It received similarly enthusiastic reviews in all the cities where it has played.The Women’s Balcony, which is opening in several US cities, would seem to face an even steeper uphill battle to explain its basic premise to Americans.It’s based on the childhood memories of its screenwriter, Shlomit Nehama, who grew up in a traditional Mizrahi community in Jerusalem, the kind of place where everyone goes to synagogue together and keeps kosher and Shabbat, but where women generally don’t cover their hair or wear long sleeves, and where there is generally tolerance for differing levels of religious observance.The movie tells the story of a congregation in this community that weathers a crisis when the women’s balcony collapses and several congregants are injured. A charismatic young rabbi, who is on the fringes of ultra-Orthodoxy, convinces the men to rebuild the synagogue without a section for the women, effectively banishing all the females in this community from public life. The film finds gentle comedy in how the women stage a protest to reclaim their place at the heart of their community.There are aspects of this movie that even secular Israelis might not understand in depth. Certainly, few Americans know about the separation of the sexes in Orthodox synagogues, among many other elements of the film. But the specificity hasn’t stopped Americans from embracing the film. It got rave reviews at the Toronto International Film Festival.Kenneth Turan, the film critic for The Los Angeles Times, called it “an unapologetically warmhearted comedic drama, a fine example of commercial filmmaking grounded in a persuasive knowledge of human behavior.”Avi Nesher’s Past Life, based on the real-life story of Israeli composer Ella Milch-Sheriff’s struggle to find out the truth about her father’s Holocaust experiences, opened in the US on June 2 (the same day that another film starring an Israeli actress, Gal Gadot, a little movie called Wonder Woman, hits theaters).Past Life features scenes such as one in which nude models pose for a Tel Aviv tabloid on the Mount of Olives, and US viewers may not fully grasp how shocking this was in the still very conservative Israeli society of 1977 (or even today). But they will likely warm to its depiction of discrimination against female music students, which is as relevant now as it ever was.The film was a big hit in Israel, and at film festivals abroad such, as Toronto.Alissa Simon of Variety called it “profoundly moving,” “gripping” and “his best film yet.”The original classical music soundtrack will be available on iTunes, Apple Music, Google Play, Amazon and other outlets, starting the same day the movie opens.These three are following in the footsteps of the recent Israeli/American hybrid, Norman, directed by Israeli Joseph Cedar and starring Richard Gere as a hustler who ingratiates himself with an Israeli prime minister (Lior Ashkenazi).This movie, which opened in mid- April in the US, received a great deal of acclaim, both for its complex Israeli- American story and the performances, especially by Gere in the title role.Although the bulk of the movie takes place in New York, with the rest set in Jerusalem, viewers might not realize that some of the scenes that are supposedly in the US were actually filmed in Israel. These include the key scene where Gere meets Ashkenazi and buys him an expensive pair of shoes that creates their bond.These films’ reception in America represent great strides for the Israeli movie industry and may be the beginning of a trend.