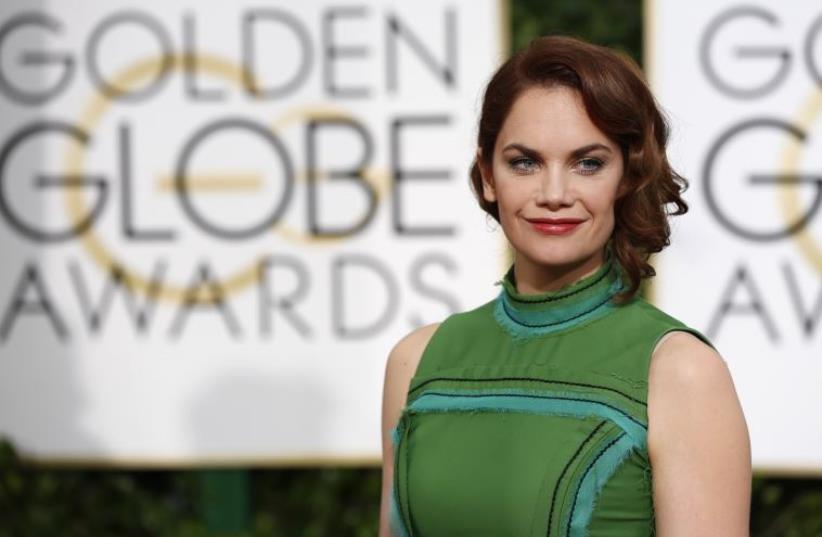 Actress Ruth Wilson arrives at the 72nd Golden Globe Awards in Beverly Hills, California January 11, 2015.
(photo credit: REUTERS)
Advertisement
Ruth Wilson, the winner of this year’s Golden Globe for Best Actress in a television drama, will star in Avi Nesher’s latest movie, Past Tense, which will start shooting in Jerusalem in the fall, The Jerusalem Post has learned. Wilson, a British actress, won the Golden Globe for the Showtime series, The Affair, which also received a Golden Globe for Best Television Series - Drama. The Affair was co-created by Hagai Levy, one of the creators of the Israeli show, Be’Tipul and its American adaptation, In Treatment. Wilson just flew to Israel and toured locations in Jerusalem with Nesher. In addition to The Affair, in which she plays a waitress who has a romance with a married writer, Wilson is known for the television series, Luther, and the movies Anna Karenina and The Lone Ranger. She has also worked a great deal in theater and received a Tony Award nomination for Best Actress for her Broadway debut in Constellations with Jake Gyllenhaal, which ran earlier this year. Nesher’s upcoming English-language film, which is being produced by US indie producer Anthony Bregman (Eternal Sunshine of the Spotless Mind), is the fact-based story of an American psychologist (Wilson) fighting her own past trauma who comes to Israel to attend a conference. Once there, she meets an old friend now living in Jerusalem, whose wife has joined a bizarre pagan cult. The couple is embroiled in a bitter custody battle over their child, whose life may be at stake if the wife remains with the cult. The character played by Wilson helps the man with the battle, and gets more emotionally involved in the case than she planned to. The movie, which will be filmed in and around Emek Refaim and the German Colony in Jerusalem, was co-written by Noam Shpancer, a psychologist, novelist and professor, and Kate Walbert, an author whose latest novel is The Sunken Cathedral.Nesher is a veteran Israeli director, who made the classic film, The Troupe (Halahaka) in the Seventies, then went to Hollywood, where he made mostly genre films. In the early 2000s, he returned to Israel and made such critically acclaimed hits as Turn Left at the End of the World (2004), The Matchmaker (2010) and The Wonders (2013).This will be the second movie with an international star made in Israel this year. Joseph Cedar’s latest film, Oppenheimer Strategies, which stars Richard Gere, was filmed both in Israel and the US, and is set to be released later this year. Last year, Natalie Portman filmed her directorial debut, an adaptation of Amos Oz’s A Tale of Love and Darkness, in Jerusalem. The movie premiered at the Cannes festival this year.