Gotta catch 'em all, even in the Knesset

Pokemon Go is a massive trend, but has it gone too far? 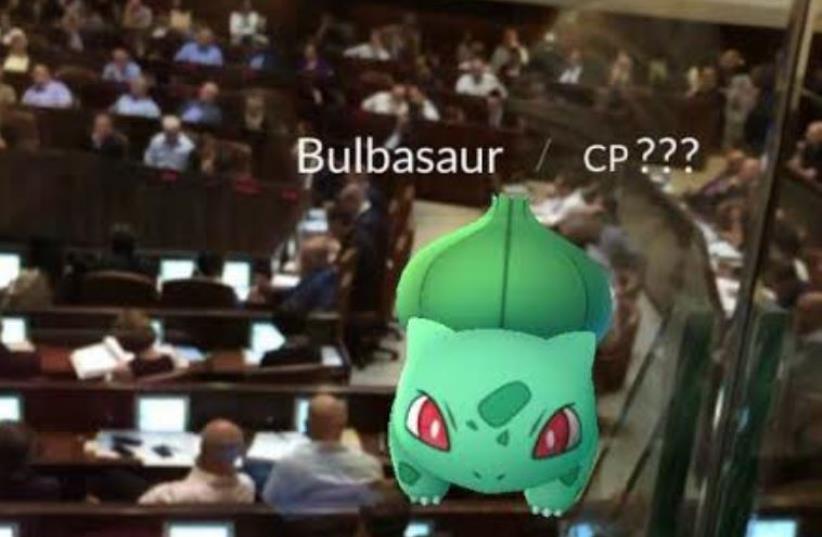 Pokemon Knesset
(photo credit: Lahav Harkov)
Advertisement
I was sitting in the reporters’ mezzanine in the Knesset on Monday evening, waiting for the debate on the contentious NGO transparency bill to begin, when I noticed something strange slightly to the right of Prime Minister Benjamin Netanyahu. It was a greenish creature with what looked like a tulip bulb on his back, and he somehow made it through security and into the Knesset. “Bulbasaur!” I shouted. “I choose you!”I tossed a Pokeball in his direction, and snapped him up, then quickly shared my achievement on social media.If you’re confused, then you’re probably at least a few years older than I am, and maybe haven’t been reading up on the last week’s biggest trend: Pokemon Go.Pokemon, as you may remember, was a Nintendo video game released 21 years ago. It’s considered the second-most lucrative video game franchise of all time, after Mario the princess-saving plumber. The most famous Pokemon is the adorable yellow mouse-like creature Pikachu. Like many in the US, I became aware of the phenomenon as a kid through its TV show, which was on after school on the now-defunct WB network. As a lover of Japanese animation (my favorite, Sailor Moon, about a klutzy schoolgirl by day, superhero dating a handsome prince by night, also had a revival in recent years), my fandom was mostly conferred on the TV show. I still remember the theme song by heart. My younger sister collected Pokemon playing cards to battle her friends on Shabbat, when she couldn’t use her Game Boy (portable Nintendo).Pokemon Go, released last week on smartphones, is an augmented reality video game. Using a player’s cellphone, built-in camera and GPS, Pokemon characters are scattered throughout the real world – appearing to users on the screens of their smartphones – and players must follow a map leading them to catch “pocket monsters,” aka Pokemon, and battle other players' monsters. The game caught on like wildfire among dorky millennials, like my sister and myself. According to Israeli data tech company Similarweb, Pokemon Go has been downloaded more times than the dating app Tindr, and it already surpassed Whatsapp, Facebook Messenger, Instagram and Snapchat for most usage per day.I tried to resist its pull, since I am, ostensibly, an adult these days, but after seeing the umpteenth article and social media post about how cool the game is, I gave in to temptation. (Technically the game is not available in Israel, but there are easy workarounds.)The key thing that makes Pokemon Go cooler than the 8-bit video game – and more enjoyable than the TV show’s repetitive plot lines and weird proliferation of sexy nurses – is its blend of reality and fiction; catching the cartoon, Japanese critters on the road or in your home, or adjacent to the prime minister’s head.Social media is now full of pictures of Pokemon in funny places. The Home Front Command encouraged its followers on Facebook to find the nearest bomb shelter by looking to see if there are any Pokemon in it. Historical sites and landmarks are often “Pokestops,” where one can find gear in the game, and I’ve seen gaggles of people with smartphones gathered at night outside the small museum two doors down from my home, which is usually desolate after 4 pm. I asked a Knesset guard if there’s an issue with people gathering by the iconic Menora (I caught a Growlithe there) but he hadn’t heard of the game.Some agoraphobes have even reported that the game encouraged them to get out of the house.On the other hand, offices and cafes have banned the game, and muggers have targeted distracted Pokemon-players.Perhaps the most horrifying story about Pokemom Go was in The Washington Post, about how the Holocaust Museum in Washington D.C. had to ask visitors to stop playing the game.“It’s not like we came here to play, but gotta catch ‘em all,” one woman at the museum told the Post.It would never occur to me to play a video game in Yad Vashem or Mount Herzl. In fact, I am enough of a grown-up to shut off the game when the NGO bill discussions began and I had to start working. And no, I did not really shout “I choose you!” in the Knesset.Other people, however, seem to not have minimum impulse control.So I want to wish my fellow Pokemon Go fans that they can “catch ‘em all” in augmented reality, but don’t lose sight of actual reality. The game will get boring soon enough, and you’ll still have to live with yourself and your choices.The writer is The Jerusalem Post’s Knesset reporter.