Guys and Dolls 'rocks the boat' in Tel Aviv

The much-loved musical based on Damon Runyon’s New York stories about gamblers, hustlers, and the city’s small – time gangsters hits the stage in Tel Aviv. 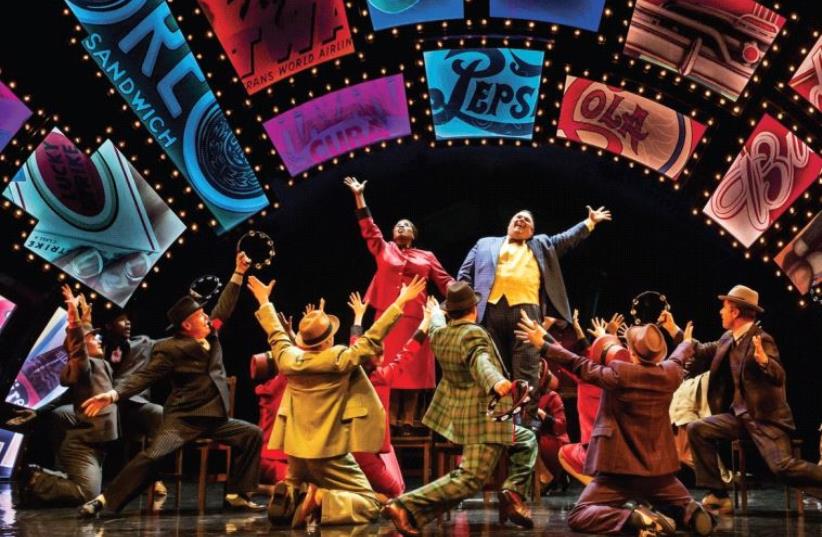 Guys and Dolls
(photo credit: PR)
Advertisement
Guys and DollsMusic and Lyrics by Frank LoesserBook by Jo Swerling & Abe BurrowsDirected by Gordon GreenbergChichester Festival Theater productionTel Aviv Performing Arts Center, 14/9/16Thing is, unless Nathan Detroit (Simon Lipkin) pays $1000 upfront to Joey Biltmore, Joey won’t let them use his garage for ‘the oldest floating crap game in New York’. That’s the slender premise that underpins this much-loved musical based on Damon Runyon’s New York stories about gamblers, hustlers, and the city’s small – time gangsters.To get his $1000, Nathan, who’s promised Miss Adelaide (Lucy Jane Adcock), his fiancée of 14 years that no way is he shooting craps anymore, makes what he thinks is a sure bet with serial gambler Sky Masterson (Oliver Tompsett). Sky has to take strait-laced Sarah Brown (Siubhan Harrison) from the Save – a-Soul Mission to dinner in Havana, Cuba.Well, we all know the saying about “the best laid plans of mice and men…” and that’s just what happens here right up to the happy end that sees Sky wed to Sarah and Nathan – who now tamely runs a newspaper kiosk – united with Miss Adelaide.It all happens under Peter Mcintosh’s great subway-station arc of lit up ads - the lights form the skyline of New York – whose configurations change to accomplish the various settings such as the Mission, a Havana nightclub and the second-rate Hot Box, which is where Miss Adelaide struts her stuff nightly.This is the touring company from a successful West End run, so you’d expect costumes, lighting, music and choreography to be inventive, and so they are. And for us English speakers it’s a treat to watch a great musical in the language in which it was written.Except that Damon Runyon’s English is special. It’s a meld of formal utterance and Midtown/Brooklynese slang; Guys and Dolls can’t work unless the performers can get inside its particular energies, rhythms and intonations, and, except for Ms. Adcock’s Adelaide, they didn’t, to the show’s detriment.Adcock’s Adelaide was delicious. She was saucy, brassy, vulnerable and lovable, most neatly delivering (among the rest), her ‘Lament’ and ‘Take Back Your Mink’. Tubby Jack Edwards, light on his feet as Nice-Nicely Johnson also seemed to have a Runyon inkling. He and sidekicks Benny (Marl Snagster) and Rusty (Ross Lee Fowkes) twinkle nimbly through their numbers.Simon Lipkin’s Nathan lacked impudence, but the charm was there. You could see why Adelaide loves him, despite everything.What didn’t work was the romance. There seemed to be little onstage chemistry between Ms. Harrison and Mr. Tompsett – whose hair needed cutting, a detail that jars. They seemed to be going through the motions rather than creating a Sarah and Sky we could root for. A pity.So all in all, this is an uneven Guys and Dolls, rescued at the last minute by a rousing “Siddown, you’re rocking the boat.”And after all, aren’t the great songs what the musical’s all about?