Hassidic hipster band Zusha takes nigunim to the next level 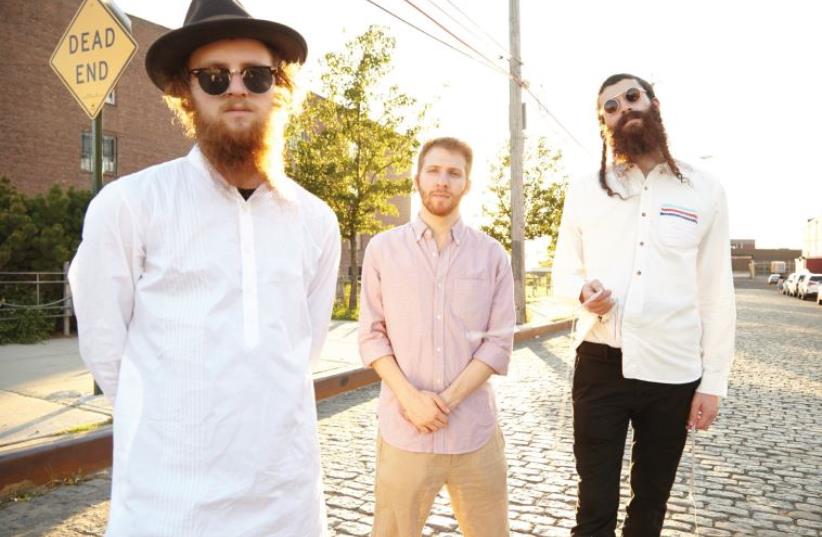 Hassidic hipster band Zusha.
(photo credit: MARKO DASHEV)
Advertisement
Zusha is a band of holy hassidic hipsters. Zusha is Carlebach-style for the new generation. Zusha is the future of Jewish music. Truthfully, the trio, comprised of Shlomo Ari Gaisin, Elisha Mendl Mlotek and Zachariah Goldshmiedt, is all of these things and infinitely more. They are as indescribable and undefinable as the nigunim they so beautifully sing. They are the humble shepherds of the wordless melodies alive in all of us. After bursting onto the music scene with their top 10 Billboard- charting, self-titled debut album in October 2014, they are now preparing to release their first full-length album on November 1. Fans in Jerusalem had a chance to see them live at their sold-out show at the Yellow Submarine on August 29. In between it all, they sat down with The Jerusalem Post to talk music, Torah and inspiration.

What’s your background story; how did you guys come together to form Zusha? We started singing Reb Shlomo [Carlebach] nigunim together at a friend’s apartment one night, and it turned into our own nigun. That became our first song, “Beis.” Slowly but surely, it became something. We started recording every time that we would jam, just on the iPhone voice memos. Our friends and family encouraged us to take it to the next level. It really started from friendship and came to something that we’re endeavoring in professionally.Every time we forget why we’re doing this, the people who love us remind us. In terms of background, we were all involved in different musical projects before we formed Zusha. We all come from different places musically, which adds to the melting-pot sound that we have. We learn from each other, which allow us to learn from other people as well. Our music continue to evolve. We get inspired by other musicians that we’ve played with, or by events in life. The best songs come when you’re not trying to write a song. When something is real about a moment, then that translates into a song. For those who speak beyond the words, they want to say something but they don’t know how to verbalize it and fine tune it. We put it into the wordless songs and all of sudden, you can express things that end up having a million meanings, but it all started as one true feeling or one honest thought. One moment becomes a world of sound. Then every time we play it, we collect those moments. All these songs of the moment come together and it’s very deep.There is a quote on your website that really stood out to me. ‘Music is Torah. Torah is life.’ How is music Torah? We don’t see them as different. Torah is a way to understand the world and a way to understand ourselves, and music is the same thing. Torah is a window to look out onto the world, and music is a window with which to look both in and out; into your own world and out into the world at large. They are both lenses. It’s said that God looked at Torah and then made the world, and we look at the world and see Torah. Before creation, there was that space, where there was mamash [truly] infinite potential. To sing nigunim, is to go back to that place before creation, where it’s clear that we’re all one. All the moments come back together again.Really, we’re living one moment, but everyone tastes it differently.

What was the reception like to your debut album, and how did it compare to your expectations? We didn’t really have expectations. We had no idea what was going to happen.We put it out and it was basically a flood of love in return. We got an email from Billboard, saying that we were charting and that they needed info from us. Shlomo called the rest of us really early in the morning to share the news. But we didn’t understand at the time what was happening.We were in the Billboard magazine with Nicki Minaj on the cover. She was doing well that week, probably a little bit better than us (laughing).But that moment was a tremendous blessing, and we’ve basically been riding that wave since last year. We put out a single, but that album was only six songs and we got all this love from it. We have so many tunes that we wish we could put out a new album every month! But we’ve gotten some amazing responses.Someone messaged us that they were listening to our album while giving birth, which was beautiful to hear. A friend of ours was having brain surgery and he said that he was humming our tunes in his head the whole time. So that was powerful.Then we get all these kid videos: Zusha youth! They’re all these kids dancing to our music. Since there are no words, it’s so accessible. Parents have reached out and said that their kids won’t go to bed unless they sing one of our tunes. When people take our work seriously, it makes us take it more seriously.

Can you talk about the creative and recording processes for the new album? Two of the deepest nigunim came from fights or struggles. The very nature of a nigun is to go on and on, so it makes the recording process difficult; condensing something that’s not meant to be condensed.It’s almost a painful experience of tzimtzum [contraction] to record and set them in stone. It’s nice to record with a band and it’s also nice to record acoustic.Sometimes we wish we could do both at the same time.We’re working with a very talented producer/ music collective called Mason Jar Music. We’re also working with amazing musicians. This album is a much bigger sound. It’s also been about giving over the music to someone else to let them do their thing on it, which is all about trust. By definition, nigunim can’t really be defined. So it’s weird to try and structure a nigun. But we’ve been able to really coauthor these songs together. Mason Jar Music was drawn to the different musical inspirations for each song; some are more funky and hip hoppy; there is one that’s very much like a tango.It’s said that if you can’t sing a song forever then it’s not worthy of singing, so we very much go by that and it pushes us to sit with these songs forever. We didn’t grow up studying music or knowing that this would be our path, so when we’re recording, we’re experimenting. We had a vision, but at the end of the day, Hashem puts it all together and we work with what comes in at a particular moment. We appreciated the choices in recording this album; what sounds and layers to add on and what to take out.Which Jewish musicians inspire you? Bob Dylan, Damien Marley (he’s a Zionist), Reb Shlomo Carlebach, early Matisyahu, and Raz Hartman. [Yossi] Piamenta, who just passed away, was an inspiration.He had a family and was also successful.Anybody who’s Jewish and a musician is an inspiration because it’s such a high thing to do. Jewish music is what helps you bring yourself to your unique future and to do what’s best for you and the world.

What does your music smell like? Hopefully, it smells like ketoret [incense offered in the Temple]. What’s the special thing about ketoret? It’s 10 incredibly beautiful scented things, and then one terribly scented thing. So we hope our music sounds like that; all the wonderful things about us that we love, and even that one thing which you don’t want anyone to know about. Mixing all the goodness with the bad until the bad even smells good.For more tour dates and information about the band, visit www.zusha.com
Advertisement
Subscribe for our daily newsletter