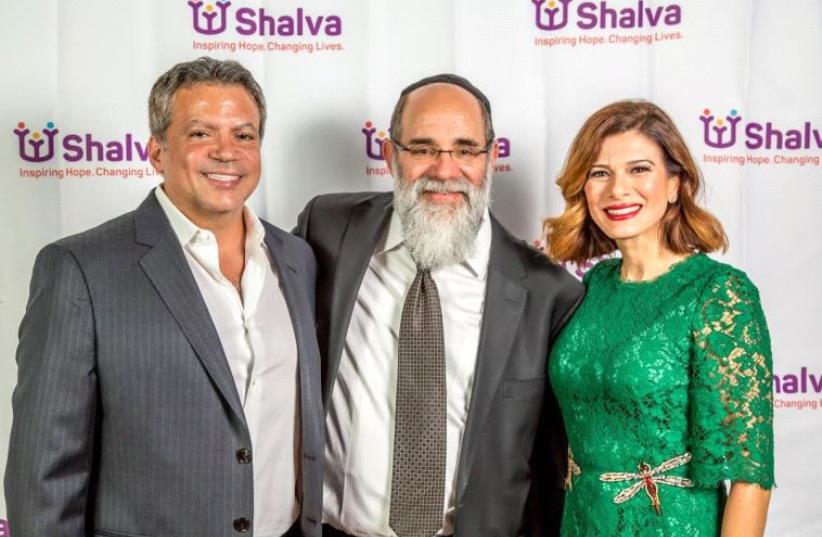 (L-R) Oscar nominated movie producer Michael De Luca, Kalman Samuels and Ms. Angelique De Luca enjoy the moment at SHALVA'S inaugural fund-raising event in Los Angeles, which attracted the creme de la creme of Hollywood society
(photo credit: LINDA KASIAN)
Advertisement
Some of the biggest names within Hollywood’s movie and TV industries including Amy Pascal, Brett Ratner Adam Berkowitz, Howard Rosenman and Dawn Hudson honored movie producer Michael De Luca and his wife Angelique, at the inaugural SHALVA “Spirit of Hope” fund-raising soiree in Los Angeles this week, which was held at the home of noted businessman and philanthropist Stanley Black. Michael is a three-time Academy Award- nominated movie producer for “The Social Network” “Moneyball” & “Captain Phillips.”Jeremy Garelick, the fast-rising movie & TV producer, who has worked with the likes of Jennifer Aniston, Cate Blanchett and Anthony Hopkins, emceed the event, which  also drew many renowned members from Los Angeles’ Jewish community, as well as local politicians.The De Lucas have worked diligently to spread the gospel within Hollywood about SHALVA’s ground-breaking outreach services to special needs children in Jerusalem and across Israel. SHALVA recently opened a state-of-the-art facility in Jerusalem, in order to service the growing needs of the community. The goal of the dinner was to create additional awareness, as well as raise critical funds to support the new center. “We feel privileged to be the Honorees at SHALVA’s ‘Spirit of Hope Dinner.’ SHALVA is an incredible organization that we have supported and been a part of for a number of years. It’s important that children with disabilities and their families get help and support tailored to their individual journey, so that they are able to reach their full potential. We look forward to the incredible success the program will continue to achieve,” said the De Lucas.Kalman Samuels, SHALVA’s Founder & Chairman, lionized the De Lucas and Black for their efforts on behalf of the organization. “That which bonds our host Stanley Black and our honorees, Michael and Angelique, is the timeless value of wanting to help people in need. Via this inaugural dinner in Los Angeles, they together with many dear friends are creating miracles for those who are unable to dream it for themselves. As a West Coast child of the 60’s, I am humbled to have established SHALVA in Jerusalem and to partner with such extraordinary, caring human beings to inspire hope and change lives,” said Mr. Samuels.Garelick added, “When Michael asked me to MC this event and discovered what SHALVA is all about, I was proud to be a part of this special evening. My family is constantly involved in assisting charitable causes and SHALVA is truly something special.”