House of Prayer in the holy city

Christians, Muslims and Jews to build joint house of worship in Jerusalem. 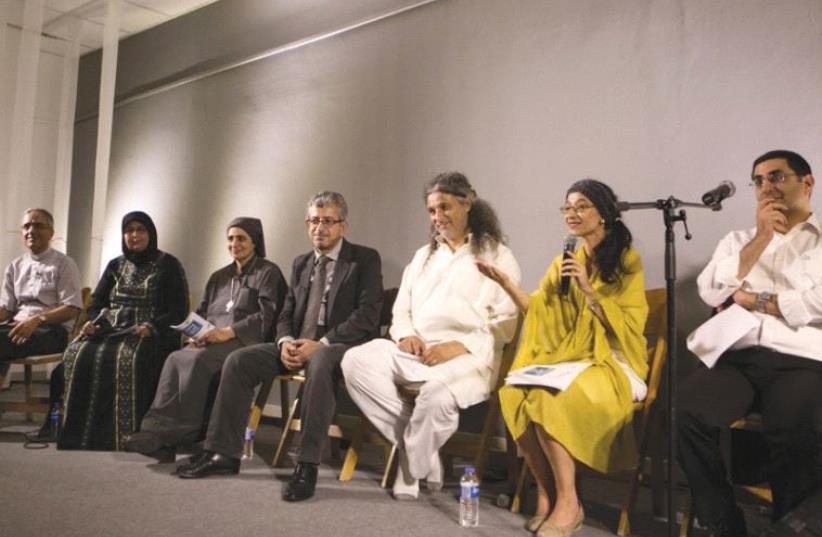 CHRISTIANS, JEWS and Muslims unite in an interfaith prayer and spiritual gathering called ‘Amen – A House of Prayer For All Believers.’
(photo credit: MICHAL FATTAL)
Advertisement
This year’s Mekudeshet Festival is now underway, and takes in an expansive array of artistic and other cultural items.Some of the slots feed off Jerusalem’s special status as a sacred site for the world’s three major monotheistic religions, such as the Amen program which started at The Alpert Youth Music Center of Jerusalem, Valley of Hinnom, on Monday, and will run through to Sunday.The event’s full title, Amen – A House of Prayer for All Believers, conveys the idea of an interface between the various faiths, and the organizers say that the project’s “primary purpose is to show that it is possible. To prove that despite all the difficulties, Jews, Christians and Muslims can meet in one place, seek out commonality and partake, together, in one of the most basic religious practices shared by all three faiths – prayer.”Each day of the week long event will be devoted to a different subject. Every morning, a workshop will be held on a specific subject, and from the afternoon to the early evening hours, the House of Prayer will invite all and sundry to join the fray, to discuss and support the idea behind the project. Preparations for the prayer services will take place 6 p.m.to 8 p.m., with a different religion hosting the discussions and overseeing the music and prayers, which relate to the selected subject of the day.Today’s discourse theme is supplications, followed by the topic of love tomorrow.At the end of the week participants will be hosted by different temples and communities. On Friday morning, guests will take part in Muslim morning prayers, on Saturday evening Kehilat Zion will host a Kabbalat Shabbat and on Sunday they will be invited to participate in a Mass.The project was initiated by Rabba Tamar Elad-Applebaum and Yair Harel, and features a slew of religious leaders including Sheikh Ihab Balha, Rabbi Dov Zinger, Hacham David Menachem and Sister Esther Salib.