The band, fronted by Adam Lambert, will play at Hayarkon Park. 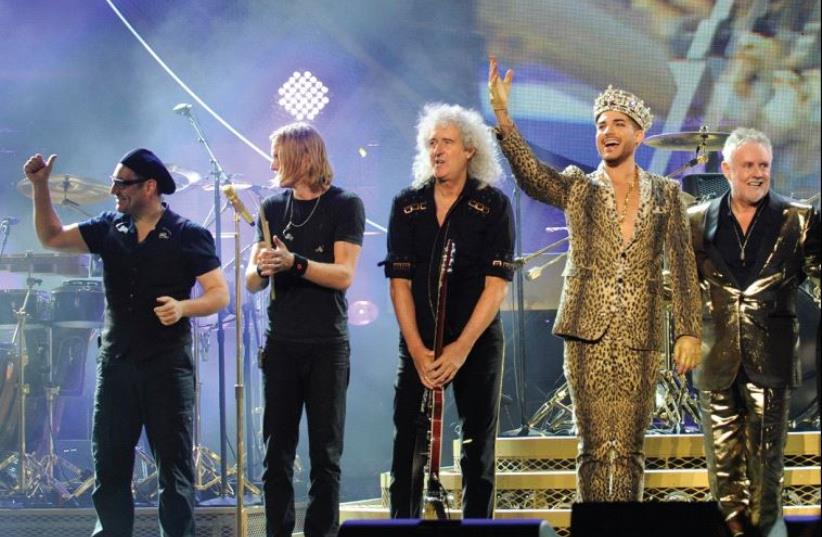 The band Queen, fronted by Adam Lambert
(photo credit: Courtesy)
Advertisement
‘You guys should go out and play again. It must be like having a Ferrari in the garage waiting for a driver.” That was the advice given to Brian May, Roger Taylor and John Deacon, the surviving members of British rock greats Queen, by Elton John after he performed with them in 1997 at a Paris tribute concert for Freddie Mercury, the band’s grandiose lead singer, who died of AIDS in 1991 at age 45.It was only the second time the trio had performed together since Mercury’s death, and the engine did indeed roar, with the power of Queen’s anthemic songs and May’s wailing, trademark guitar sound leading the way.The years have been kind to Queen’s legacy, as their catalogue of epic tunes that blurred the boundaries between radio-friendly pop rock, heavy guitar histrionics and complex vocal chorales have ossified into a monument of an era.The long-running musical We Will Rock You has introduced a new generation to the band’s music, and Mercury’s grandiosity is still seen as the yardstick by which all rock front men are measured. And, of course, don’t underestimate the influence of that iconic scene in Wayne’s World, where Wayne, Garth and posse pop “Bohemian Rhapsody” into the tape deck and headbang their way to nirvana.Since taking that driverless Ferrari out of the garage 19 years ago as John suggested, May and Taylor have resurrected Queen a number of times (Deacon retired from performing after that 1997 show).Everyone from Luciano Pavarotti and Robbie Williams to George Michael and Paul Rodgers (from Free and Bad Company) has attempted to fill Mercury’s giant shoes for shows, tours or recording sessions. But it wasn’t until May and Taylor performed on the finals of the 2009 season of American Idol with runner-up Adam Lambert that they, like the prince in Cinderella, discovered the perfect fit.Lambert’s extroverted showmanship, nearly operatic voice and combination of bravado, camp and charisma offered a close facsimile to Mercury’s over-the-top persona. After Lambert joined Queen two years later at the 2011 MTV Europe Music Awards for confident versions of classics “The Show Must Go On,” “We Will Rock You” and “We Are the Champions,” May and Taylor said they felt the energy of the old band.Since then, the Queen-Lambert combination has hit the road for more than 70 sold-out shows before a million fans around the globe. Amid detractors who decry the karaoke vibe of a Mercury fillin, the Lambert-led Queen has generally been well received for capturing the glitz and spectacle of a Queen show in its prime. And the 34-year-old Lambert, who has fared moderately in his own post- American Idol career, is one of the few performers who are able to pay tribute to Mercury without sacrificing his own stage presence and personal flair.“It’s wonderful that we have Adam…You need an extraordinary figurehead, and we do have it in Adam. So it’s a gift from God,” said May in an interview posted on YouTube ahead of a tour earlier this year.“He’s a nice person to work with, which is vital because you can’t possibly tour the world with someone you don’t like. He has that camp thing, too,” May added in a recent interview with Timeout magazine in China. “He has that delightful kind of lightness that people warm to, and it really fits so well with us because we spent a load of years with Freddie, who also had that kind of lightness.”Lambert, in an interview last year with NME, demurred when asked what it was like to replace Mercury.“There’s never going to be another, and I’m not replacing him,” he said. “That’s not what I’m doing. I’m trying to keep the memory alive and remind people how amazing he was, without imitating him. I’m trying to share with the audience how much he inspired me.”A review of Queen’s show in June at the Isle of Wight Festival in England opined that “This was the closest we will ever get to seeing the band in their pomp,” before adding, “The sheer quality and enduring appeal of the songs trounced all cynicism.”Israeli audiences never got to experience Queen live in their heyday, but their autumn world tour is going to find the revamped group performing on September 12 at Hayarkon Park.“I feel so privileged that we can still do this. We spent half our lives building this legacy of songs and contact with an audience, and we can still be out there and doing it,” says May.Queen will perform on September 12 at Hayarkon Park in Tel Aviv.