Revered musical maestro strips to piano and voice for a new series of shows. 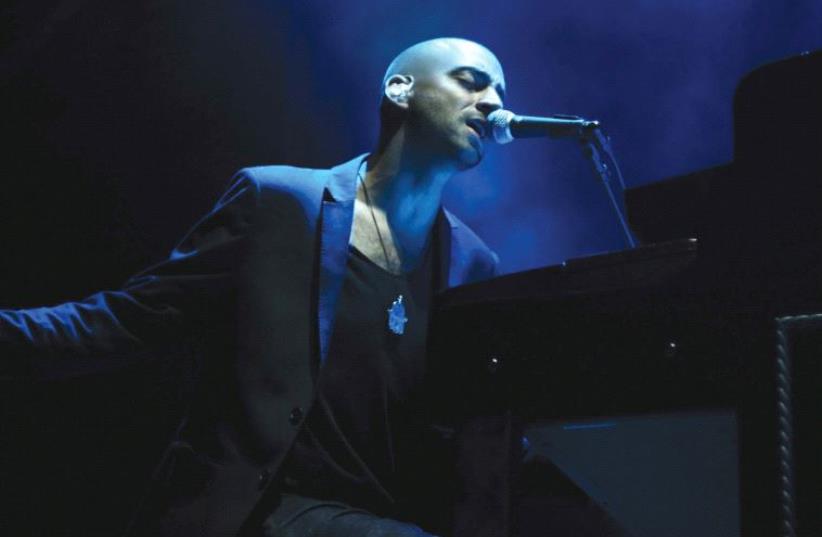 ‘PERFORMING SOLO is still a work in process for me but it’s a great pleasure to emotionally connect with the audience,’ says world renowned Israeli musician Idan Raichel.
(photo credit: ELAD WEISSMAN)
Advertisement
For someone whose whole persona is based on big – huge – projects, immense bands and flowing, colorful head scarves, going out on stage by yourself with just your piano, voice and shorn scalp can be a paralyzing moment.But despite some trepidations and butterflies, Idan Raichel is reveling in shedding the lavish trappings that have defined him for over a decade as Israel’s poster boy for musical cross-cultural diversity.The 38-year-old pianist and disseminator of world music and Israeli goodwill as ringmaster for The Idan Raichel Project is riding on the wave launched by the 2015 release of his first solo album, At the Edge of the Beginning, by staging a solo piano-man tour next month throughout the country.“From the beginning, I was performing with a big band,” Raichel told The Jerusalem Post recently. “Many artists start alone, appear in small clubs and gradually build up to be bigger with a band. We were lucky that we had a band and a big audience from the beginning. The downside is that the fear of appearing onstage alone grew and grew over the years.”“But, after seeing so many interesting solo performances in recent years – artists from Dave Matthews to Gilberto Gil and even some theater monologue performances – I developed the confidence and desire to jump into the deep water. Performing solo is still a work in process for me but it’s a great pleasure to emotionally connect with the audience.”Not having a band to fall back on take some of the brunt of attention and musical tasks has prompted Raichel to rediscover and re-appreciate some of his older fullband songs. Reducing a song down to its essence reveals whether the song stands on its own, or skates along on a great arrangement or rhythm track.“Any song that can’t be presented on one instrument – or even a capella – is lacking.A song built on production speaks less to me... but even a huge symphony, you can sing its themes alone – like Beethoven.Anyone can sing ‘da da da dum,’” he said, humming the opening bars to Beethoven’s 5th Symphony. “With every song there’s this DNA that has to work, whether it’s one instrument or a full band.”Taking the solo track has also forced Raichel to deepen his focus and internalize that each performance depends solely on him, and not on his varied band of musical gypsies.“The process of concentration is very important. I realize that I’m not in a band framework and can’t lean back and say, ‘ok, boys, hit it,’” he said.“My process starts from the morning of the show. I stop eating around noon...and I enter this mode of withdrawing into myself. This enables me to go onstage and engage the audience with an authentic solo performance.”Authenticity is a big deal for Raichel, who catapulted into the hearts of Israelis with his 2003 breakthrough song, “Bo’ee,” combining lush piano-based world music with Ethiopian voices. Part of the allure was calling the assembling musicians onstage or in the studio at any given time a “Project” instead of band. Like Forrest Gump’s box of chocolates, you never knew what you were going to get. And Raichel, with his exotic dreadlocks framed by a black turban, quickly became an icon, both at home and eventually abroad, where he has become a traveling global emissary for Israel via his music and message of inclusion.“When we play in Israel, to our delight, the music is called mainstream. When we play around the world, they call it world music,” said Raichel. “In the Project, from Andreas Scholl who lives in Germany to Ana Moura who sings in Portuguese to Shimon Buskila with a Moroccan theme to Mira Awad in Arabic and Tamir Halperin in Hebrew, it’s all authentic Israeli.”“At the beginning, we thought world music sounded like a strange label, but we realized that it was actually a big compliment. Edith Piaf has become the soundtrack of France, Bob Marley in Jamaica and Youssou N’dour in Senegal. At the end of our performances, whether we’re in India, Nigeria or Switzerland, the audience feels like they connected for two hours to the soundtrack of Israel – and for us, that’s the greatest compliment.”On a warm evening earlier this month, Raichel landed in Israel from a trip abroad and drove straight to Jerusalem where he was honored by the B’nai Brith World Center with a special citation during its annual journalism award recognizing excellence in Diaspora reportage – for his fostering of Israel-Diaspora relations through the arts.A quartet of young musicians performed his songs during set intervals between the speeches. When Raichel got up to receive his award, he spoke humbly, reiterating some of the above points about his role as a musical goodwill ambassador.He then apologized for having to run off to perform at a concert later that night.Running off the stage, though, he paused, he turned to the crowd. “Is it ok if I play one song for you?” To a resounding “yes,” he sat down in place of the quartet’s piano player, and performed a loose, fun rendition of “Before It Ends,” replete with selfies and a sing-along from the well-heeled audience.No Project or huge assemblage was required to produce a mesmerizing moment. Raichel will continue to prove that point as he tours with Piano Songs, beginning August 4 and 5 at the Tel Aviv Performing Arts Center and then continuing on to other venues around the country, including Jerusalem over the next two months.Sometimes, the biggest sound can be made by one person.