A Brit, a Dane and a Canadian talk about their lives in the Kamea Dance Company and how they got there 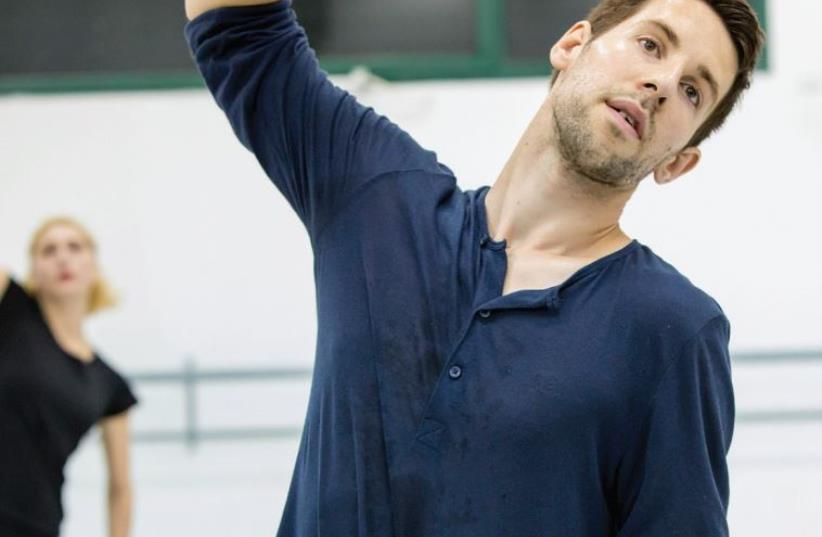 Dancer Aonghus Hoole
(photo credit: KFIR BOLOTIN)
Advertisement
A Brit, a Dane and a Canadian walk into a room. This is either the beginning of a joke or an average morning at the headquarters of Beersheba-based Kamea Dance Company.Led by Tamir Ginz, the 14-year-old troupe has managed to lure foreigners to the south of Israel during one of the most markedly volatile periods since the establishment of the country. How? By offering these individuals an opportunity to do what they love: dance.On the day that we sat together, the three men had just finished a run of Ginz’s Bamidbar Dvarim (Desert of Things). In a sunwashed studio on the second floor of the company’s compound, the 12 company members and two apprentices danced to the point of exhaustion, an everyday occurrence at Kamea. Sweaty and tired, Aonghus Hoole, Peter Starr and Lukas Hartvig plopped down onto the couches in the teacher’s lounge to talk about their lives in the company and how they got there.
(Photo: Lukas Hartvig)

Hoole, Starr and Hartvig hail from very different parts of the globe and yet they share similar stories. Each of the three received professional dance training in his respective country, Hoole in London, Starr in Vancouver and Hartvig in Copenhagen, and each eventually discovered and fell in love with the Israeli dance aesthetic.“I had never been to Israel, I had no Jewish friends prior to moving here and was completely clueless about Beersheba,” admits Hartvig.The 22-year-old, with his tall frame, strawberry blond hair and light eyes seems out of place in the desert.“I saw that Tamir was hosting an audition in Amsterdam and so I went.”Hoole and Starr nod along, having come to Kamea in the same way. The three admit to never having heard of Beersheba before walking into the Kamea audition.“Once I got here, it took me some time to get used to the company’s way of working,” says Starr. A muscular man with bright blue eyes and tousled brown hair, Starr has the look of a 1940s movie star. Having arrived via Alberta, Canada, where he was a member of a classical ballet company, Kamea’s neo-classical/contemporary style and work ethic came as a bit of a shock to Starr.“At home, they start with the rules and we finish with them. Things are much more casual here.”Starr, like Hartvig, recently began his third season with the company, Hoole is in his second.“The criteria for working here are quite demanding but I find it satisfying because, at the end of the day, everyone really cares about the performance,” Hoole says. Tall, charming and warm, Hoole is a favorite of the Kamea staff.“Isn’t he something?” says executive director Merav Zimand as she passes through to make sure the dancers are comfortable.Hoole arrived to Beersheba just in time for the final throes of Operation Protective Edge. While friends and family urged him to rethink his relocation, Hoole felt strongly about making a go of it with Kamea.“It was very intense. I had just landed and there were sirens going off in the middle of rehearsal.”“We were huddling together in the staircase, crying, talking about what was happening, the entire experience was very surreal,” adds Hartvig.
(Photo: Peter Starr) During that time, Ginz began to work on a new creation, Red Skies. The process allowed the three foreign dancers to find an outlet for the tension and fear of everyday life.“It helped us a lot to work on Red Skies. I feel really connected to that piece,” . Earlier that morning, the company had discovered that a Kamea production, Itzik Galili’s Things I Told Nobody, had been nominated for Tel Aviv City Mouse’s Top Dance Piece of 2015.“It is very nice to have a close relationship with your choreographer, as we do with Tamir,” says Hartvig. “That said, it was great getting to work with someone new.”“It was a much more introverted process than we are used to. Tamir is very extroverted and Itzik was much more interested in where the movement comes from, what the emotions are that motivate the dance,” adds Starr.As for their future in Israel, Hoole, Starr and Hartvig prefer not to comment.“You never know,” smiles Hoole. “A dancer’s life is so dynamic. One day you are in England and the next in Israel. For now, I’m very happy to be here.”In the coming weeks, Kamea will perform Bamidbar Dvarim, the children’s show Gleech and Galili and Ginz around Israel.For more information, visit www.kameadance.com.
Advertisement
Subscribe for our daily newsletter